Okay, moms—have you ever really noticed your facial expression in those a candid action snapshots of yourself?

I mean the photos your kids randomly take when they swipe your phone and you’re too busy to notice they have snapped 52 pictures of you vacuuming in your PJs. Or maybe that never happens to you…

What I’m trying to say is what look do you have on your face when you’re not actually posing for a picture? When you’re just doing everyday tasks? What’s your “neutral” expression?

That’s something I didn’t think about until the other day, when I was scrolling through my camera roll and saw myself in one of those aforementioned candid photos (which I will not include in this article for reference because it’s pretty scary). Honestly, I was taken aback by the image.  Not because my hair and lack of makeup exuded a “just rolled out of bed” look.

It was because of the scowl on my face.

And I wasn’t even angry.  It was a sour look that I knew resulted from my concentrating on whatever task was taking up my attention at the time.  But did it say more? Is that the face my children see as I do household chores? As I make meals? As I help them with their schoolwork? Boy, that kind of face sure doesn’t portray the joy that should come from homemaking.

Okay, so motherhood takes a lot of concentration. Hauling three toddlers to the grocery store is intense. Dealing with teenage hormones could put a frown on even Pollyanna. But I don’t want my kids (or the general public, for that matter) to think that my job as a mom is so difficult that it’s hard for me to have a smile on my face for more than two minutes a day.

I mean, I’m committed to promoting families. I truly believe motherhood is the most important calling a woman can have. There are enough women out there bemoaning so-called menial homemaking duties. There are enough blogs out there promoting on-trend clothing, a perfect body, and trips to the spa as the best ways to put a smile on your face, instead of raising a family.

So guess what I did?

I decided to smile more.

At first it seemed a little silly.

Especially when I was alone or when I was out in public (and my 2 year-old was throwing a tantrum because he didn’t want to get into his car seat). I think people at the grocery store thought I was a little loopy. But they still smiled back.

And eventually I noticed something interesting.  I noticed that the smile (even though it started out simply as a matter of duty) ended up being genuine. 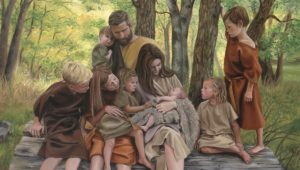 As I smiled, a sense of joy in motherhood started to permeate my mind. It was hard to feel like a martyr. It was hard to be resentful. It was easier to imagine the great mothers who have come before me–Eve, Mary, Sariah–and how they must have conquered a lot of potentially sour-faced moments to become the the angelic matriarchs that we know inspired and encouraged their posterity…all with a radiating smile.

So take the Smiling Mommy Challenge!

Find more joy in the monotonous!

Laugh with your toddler. Grin at your teenager. Make your smile the last expression your husband sees on your face when you leave and the first expression he sees when he walks in the door each evening. 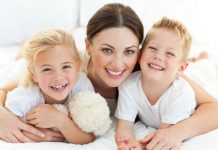 9 Mom-isms for Your Mother’s Day