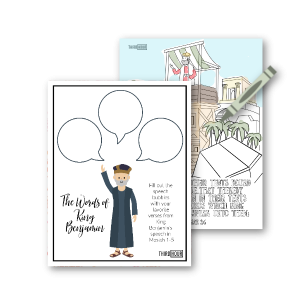 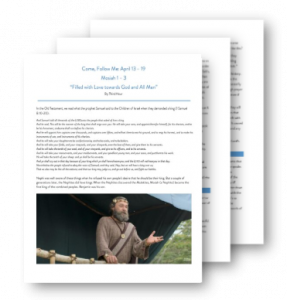 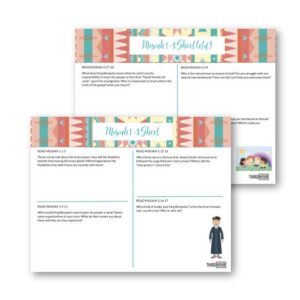 Mosiah 1—3: “Filled with Love Towards God and All Men”

In the Old Testament, we read what the prophet Samuel said to the Children of Israel when they demanded a king (1 Samuel 8:10-20):

And Samuel told all the words of the Lord unto the people that asked of him a king.

And he said, This will be the manner of the king that shall reign over you: He will take your sons, and appoint them for himself, for his chariots, and to be his horsemen; and some shall run before his chariots.

And he will take your daughters to be confectionaries, and to be cooks, and to be bakers.

And he will take your fields, and your vineyards, and your oliveyards, even the best of them, and give them to his servants.

And he will take the tenth of your seed, and of your vineyards, and give to his officers, and to his servants.

He will take the tenth of your sheep: and ye shall be his servants.

And ye shall cry out in that day because of your king which ye shall have chosen you; and the Lord will not hear you in that day.

Nevertheless the people refused to obey the voice of Samuel; and they said, Nay; but we will have a king over us;

That we also may be like all the nations; and that our king may judge us, and go out before us, and fight our battles.

Nephi was well-aware of these things when he refused his own people’s desire that he should be their king. But a couple of generations later, the Nephites did have kings. When the Nephites discovered the Mulekites, Mosiah (a Nephite) became the first king of the combined peoples. Benjamin was his son.

Benjamin was quite a different king than the Jews had had historically, as was his father, Mosiah. As an activity, compare Benjamin with the sort of kings Samuel described, and which Saul, David, and Solomon later became. Find examples in the Bible of the excesses of the Old Testament kings.

If you want to do something as a family to look at what a king’s court might look like, go to this Wikipedia article about Topkapi Palace in Istanbul, the former court of Ottoman sultans. This complex once comprised a court of about 5,000 people. Contrast this lifestyle with that of King Benjamin.

The importance of records (Mosiah 1):

Benjamin had managed to bring peace to Zarahemla after many grave battles with the Lamanites. King Benjamin had three sons—Mosiah, Helorum, and Helaman—and he taught them the language of their fathers and the scriptures. Their language was Hebrew, and the scriptures brought out from the Holy Land were in Hebrew, but the scriptures recorded by Nephite prophets had used Reformed Egyptian symbols because they used less space on the plates. Benjamin taught his sons all these language usages.

To learn about more modern situations where languages have been combined for religious and cultural purposes, search online for Ladino and Yiddish. Why were these languages created? How do they compare with how the Nephites recorded their scriptures?

In verses 3-7, Benjamin teaches his sons why the records were so important. What happened to the Mulekites, who didn’t bring records with them when they escaped from Jerusalem?

In verse 9, we see that King Benjamin was nearing the end of his life and knew he needed to confer the kingdom on one of his sons. In verse 10 we see that he has chosen Mosiah, and orders Mosiah to call the people together for the transfer of power. In verse 11, we see that Benjamin desired to give his people a name because of their diligence in keeping God’s commandments. Why would he want to give his people a name? Name some organizations in your area. What do their names say about them and why are these names important?

In verse 15, Benjamin gives Mosiah charge over all the affairs of the kingdom, and in verse 16, he gives him charge over the plates, the sword of Laban, and the Liahona. What items were in the box that Joseph Smith retrieved as he followed the Angel Moroni’s instructions? Where did the “interpreters” come from?

Responding to Mosiah’s proclamation throughout the land, the number of people who came to hear King Benjamin’s final address were so numerous, they could not be numbered. They brought the firstlings of their flocks (verse 3), so they could offer sacrifice according to the Law of Moses. They had built a temple in Zarahemla and they pitched their tents around it. Find an illustration of the “camp of Israel” as they arranged themselves during the Exodus from Egypt. They were organized around the tabernacle, which served as a portable temple as they wandered.

The people were thankful for their deliverance from Jerusalem and from the Lamanites and they were grateful for their king. Because they were so numerous, King Benjamin built a tower so he could be heard better (verse 7) and he also had his words written down and delivered to the people (verse 8).

In verse 9, King Benjamin begins to explain to the people why he wanted to speak to them. He was not giving a speech to aggrandize himself or to tell the people how great his reign had been, and he wasn’t just using the occasion to make the transfer of power. He desired to unfold the mysteries of God to them. Looking back on your research on the Ottoman Sultans, what’s the difference between a king and a prophet-king?

In verses 10 and 11, King Benjamin talks about his weaknesses and how he is just a man. Benjamin was a prophet, but he was still very humble. Compare this to the way ancient Egyptian Pharaohs perceived themselves: “One of the roles of the pharaoh was as an intermediary between the gods and the people….the pharaoh was deputized by the gods.”

Benjamin labored with his own hands so that he wouldn’t have to tax the people for his support (verse 14). Is this the way it is with your country today? Why or why not? Verse 17 has an important lesson for us:

How does it serve God when we serve others? Beginning in verse 19, Benjamin tells his people (and us) that we should give all the thanks and praise we can muster to the God who has created us and preserved us. In verse 21, King Benjamin says that because of all God does for us, we will always be unprofitable servants. All God requires is that we keep His commandment. If we do so, God immediately blesses us, so we continue to be in His debt.

In verse 27 and 28, King Benjamin says that it was his responsibility to teach his people, so “that your blood should not come” upon him at the judgment. What did he mean? Why is it important to teach others the truth of the gospel when you have it?

Read verses 34 – 41. King Benjamin is talking about sinning after we have been taught the gospel. What is the difference in committing sin for a person who knows nothing about the gospel and a person who has been well-taught? In the Book of Mormon, the Nephites end up being totally destroyed by the Lamanites. Their civilization fell fast and hard because they were in “open rebellion” against God (verse 37). What does it mean to become “an enemy to all righteousness”?

In chapter 3, Benjamin prophesies to his people. Benjamin says that he has learned these things from an angel of God. In verse 5, Benjamin begins to recount what the angel told him to relay to the people. Soon the Lord will come down and minister to men, working miracles. He’ll suffer greatly for the wickedness of His people. He’ll be called Jesus Christ, the Son of God. In Hebrew, this is “Y’shuah haMoshiach, ben Elohim.” The angel has told Benjamin that Jesus’ mother would be named Mary (Miryam). The people would consider him a man and crucify Him but He would rise on the third day and stand to judge the world (verses 9, 10).

His blood atones for the sins of a fallen world, or who have ignorantly sinned (verse 11), but those who have willfully sinned against knowledge must repent (verse 12). God has always sent prophets to teach us these things (verse 13) and a schoolmaster law for the stiffnecked Israelites (verse 14). God has shown signs and wonders and has tried to teach His children that the Law of Moses cannot save without Christ’s atonement. We must become as little children (verse 18) and submit to Christ. The natural man is an enemy to God (verse 19). 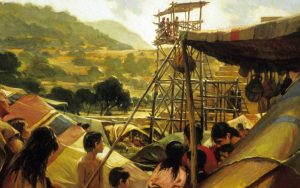 Verse 19 lists the qualities of little children that adults must have in order to be accepted into God’s kingdom. Little children are submissive, meek, humble, patient, full of love, and willing to submit. Discuss these qualities. Why are they so difficult for adults to have? How is “meekness” different from “humility”?

In verse 20, Benjamin says that the time will come when the knowledge of the Savior will cover the earth. When will that be? Why are little children blameless? What did Mormon have to say about little children?