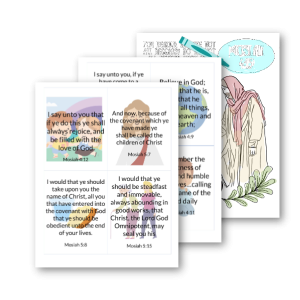 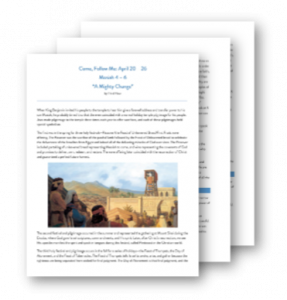 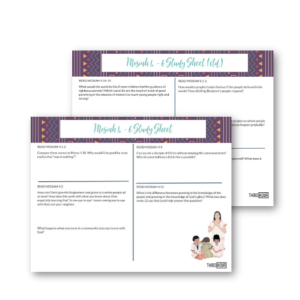 When King Benjamin invited his people to the temple to hear him give a farewell address and transfer power to his son Mosiah, he probably timed it so that the even coincided with a normal holiday temple pilgrimage for his people. Jews made pilgrimage to the temple three times each year to offer sacrifices, and each of these pilgrimages held special symbolism.

The first was in the spring for three holy festivals—Passover/the Feast of Unleavened Bread/First Fruits wave offering. The Passover was the sacrifice of the paschal lamb followed by the Feast of Unleavened bread to celebrate the deliverance of the Israelites from Egypt and indeed all of the delivering miracles of God ever since. The Passover included partaking of unleavened bread representing Messiah to come, and wine representing the covenants of God and promises to deliver, own, redeem, and restore. The wave offering later coincided with the resurrection of Christ and guaranteed a perfect future harvest.

The second festival and pilgrimage occurred in the summer and represented the gathering at Mount Sinai during the Exodus, where God gave Israel scriptures, commandments, and His spirit. Later, after Christ’s resurrection, we see His apostles manifest the spirit and speak in tongues during this festival, called Pentecost in the Christian world.

The third holy festival and pilgrimage occurs in the fall for a series of holidays—the Feast of Trumpets, the Day of Atonement, and the Feast of Tabernacles. The Feast of Trumpets tells Israel to awake, arise, and gather because the righteous are being separated from wicked for final judgment. The Day of Atonement is that final judgment, and the only time the high priest is allowed to enter the holy of holies in the temple, and where he sprinkles sacrificial blood on the altar, the veil, and elsewhere. The Feast of Tabernacles mirrors the Passover week, but its imagery is Second Coming imagery—the final judgment. It is full of joy for salvation of Israel and includes waving palm branches while parading seven times around the sacrificial altar.

If Benjamin did time his speech to coincide with a festival, which one would you choose according to its message?

The wisdom and order of God’s plan (Mosiah 4):

Benjamin had finished relaying the information to his people which he was commanded by the visiting angel. He beheld that all of the people had fallen to the earth, having viewed their own nothingness and begging for the application of the atoning blood of Christ. In the Book of Moses, in the Pearl of Great Price, Moses says, “Now, for this cause I know that man is nothing, which thing I never had supposed” (Moses 1:10). Moses had just seen God and God was revealing much knowledge to him. Why would he say that “man is nothing” and why is that a good thing? (See also Mosiah 4:11.)

In verse 3 we see that after the people cried out, the Spirit of the Lord came upon them. They were filled with joy, had received a remission of their sins, and they had a peace of conscience because of their faith in Christ. Note that when Israelites repented and made sacrifices, it was both national and individual. This was a long tradition that still continues today. Discuss this. How can Christ give His forgiveness and grace to a whole people at once? How does this work with what you know about Zion, especially learning that “to see eye to eye” means seeing eye to eye with God, not your neighbor. What happens when everyone in a community sees eye to eye with God?

In verse 4, King Benjamin calls the people back to attention to hear the rest of his words. The people are coming to real faith in Christ and an understanding of the power of the atonement. They are receiving the blessings of the presence of the Holy Ghost, even as they keep the Law of Moses. Benjamin includes admonishing them to keep God’s commandments. Can you be a disciple of Christ without keeping His commandments? Why do some believers think this is possible? King Benjamin teaches the people that salvation comes only through Jesus Christ.

In verse 13, Benjamin says we won’t have a desire to injure one another. How many movies and TV shows feature revenge as the central theme? How does that satisfy the audience? Does it satisfy you? Why? Why is social media so injurious? How can we change that?

In verse 14 and 15, Benjamin has a word for parents. What does God expect of good parents? How can parents follow his guidance?

In verse 16, Benjamin talks about care for the poor. In every instance that God has destroyed societies they have persecuted the poor. It is mentioned in scriptures over and over again. Even in Sodom, the worst sin was their treatment of the poor. How can we live up to the counsel in verses 16 – 26?

There is wise counsel in verse 27. What if we gave away everything we have to the poor and then had nothing left for ourselves? The poor and needy are everywhere and the amount we have to give, if we are wise, is small? How do we know if we are giving too much, too little? What if we ourselves have very little, how can we give? How can we be diligent but not run faster than we have strength?

Being called by the name of Christ (Mosiah 5):

King Benjamin sent among his people to find out if they believed all his words. How might the prophet do that today?

In verse 2, we see that the people all believed and had experienced a great change, desiring only to do good. We have many examples of this sudden “rebirth” in the scriptures: Paul, Enos, Alma the Elder, Alma the Younger, the sons of Mosiah. But can this process happen gradually? Have you experienced this change of heart? Or are you experiencing it? (Discuss the videos included with the lesson online.)

The people were ready to enter into a covenant (verse 5) to do God’s will. What covenants have you entered into? What did you commit to and what are the promises of God to you?

In verse 8, Benjamin says there is no other name given that will lead to salvation.  He commits his people to being obedient and says that will make them free. Why do most people in the world view the commandments as limiting and not freeing? How does living the commandments make us free?

King Benjamin records the names of the people (Mosiah 6):

King Benjamin had the names of the believers recorded, and there was not one soul over the age of accountability who did not enter into the covenant. Why is it important to keep a record of the believers? Read Doctrine and Covenants 132:46. How does it relate to keeping records on earth of the covenants we make?

In verse 3, Benjamin consecrates his son Mosiah to be a ruler and king over the people. What does it mean to consecrate? Are most kings consecrated? Why or why not?

Mosiah began to rule at age 30. There are two verses in Mosiah 6 that explain his rule and the condition of his people. Describe this and discuss why there was no contention in the land.