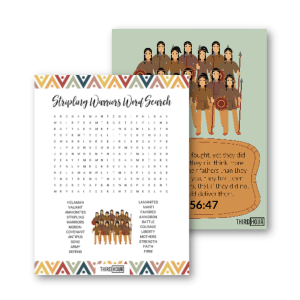 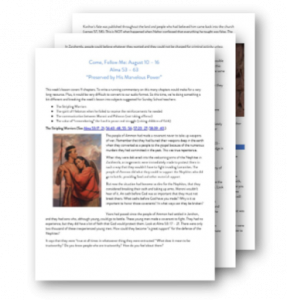 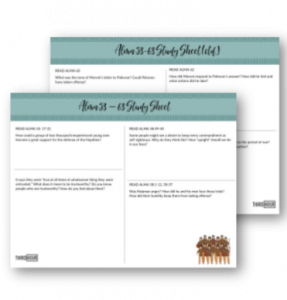 This week’s lesson covers 11 chapters. To write a running commentary on this many chapters would make for a very long resource. Plus, it would be very difficult to convert to our audio format. So this time, we’re doing something a bit different and breaking the week’s lesson into subjects suggested for Sunday School teachers:

The people of Ammon had made a covenant never to take up weapons of war. Remember that they had buried their weapons deep in the earth when they converted as a people to the gospel because of the numerous murders they had committed in the past. This was true repentance.

When they were delivered into the welcoming arms of the Nephites in Zarahemla, arrangements were immediately made to protect them in such a way that they wouldn’t have to fight invading Lamanites. The people of Ammon did what they could to support the Nephites who did go to battle, providing food and other material support.

But now the situation had become so dire for the Nephites, that they considered breaking their oath and taking up arms. Moroni wouldn’t hear of it. An oath before God was so important that they must not break theirs. What oaths before God have you made? Why is it so important to honor those covenants? In what ways can they be broken?

Years had passed since the people of Ammon had settled in Jershon, and they had sons who, although young, could go to battle. These young men made a covenant to fight. They had no experience, but they did have a lot of faith that God would protect them. Look at Alma 53: 17 – 21. There were only two thousand of these inexperienced young men. How could they become “a great support” for the defense of the Nephites?

It says that they were “true at all times in whatsoever thing they were entrusted.” What does it mean to be trustworthy? Do you know people who are trustworthy? How do you feel about them?

In verse 21, it says that these sons had been taught to keep the commandments and to walk uprightly. Sister Joy D. Jones, Primary General President, talked about raising righteous children. Sister Jones stressed the following:

Something more the parents among the people of Ammon may have done is to constantly remember the deliverance they received from the Lord. These stories, when retold often, help infuse meaning into the lives of believers and increase faith.

In Alma 56:47, it says that the Stripling Warriors “never had fought, yet they did not fear death.” How do you think their example inspired the other men fighting to defend their freedoms? Where did they get such unshakable faith? What is the difference between being in a group of 2,000 than being alone?

Several times the scripture talk about the mothers of these young men. How much power do women have in creating righteous generations? None of these young warriors died, but all of them were wounded. Have you ever had an experience where you weren’t completely delivered but you know God saved you from a worse fate?

In Alma 58:39 – 40, we see that the “Sons of Helaman” were not just trustworthy in fighting, but that they sought to keep every commandment. Why do some people call this being “self-righteous”? How upright should we be in our lives?

Helaman and his forces were in Manti waiting for food, supplies, and reinforcements, but very little came. Helaman wrote to Moroni trying to find out what was wrong and to plead for help. Was Helaman angry? Were his men angry? How did they face these trials? How did their humility keep them from taking offense?

When he heard about the dire straights of Helaman’s forces, Moroni wrote a letter to Pahoran, the chief judge in Zarahemla. There are scriptures in Alma that talk about the righteousness of Moroni, and how if all men were like him, hell would be shaken. But Moroni did sometimes get angry and that anger always moved him to action. How is this kind of anger different than losing you temper and breaking things? Is there such a thing as righteous anger?

What was the tone of Moroni’s letter to Pahoran? Could Pahoran have taken offense at Moroni’s letter? Do a little role play and imagine being Pahoran replying to Moroni in a tone of offense. What do you think about Pahoran’s “soft answer”? How can we use the “soft answer” daily to open lines of communication with other people? How did Pahoran’s response affect Moroni?

Elder Bednar gave a conference talk called “And Nothing Shall Offend Them.” In it he makes certain points:

Read the talk and discuss it. Taking offense can ruin lives. How?

These chapters in Alma come together to show us that we can choose to be humble no matter what is happening in our lives. Whether we are prospering or in the midst of adversity, we can remember the Lord and be full of gratitude for His blessings (Alma 62:39-41, 48-51).