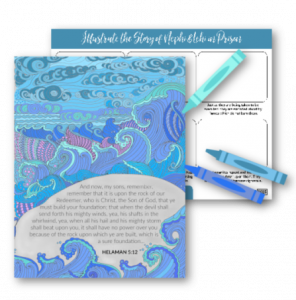 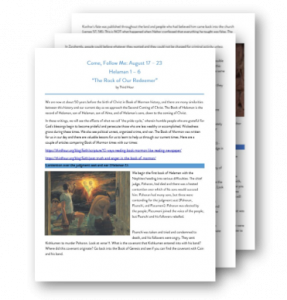 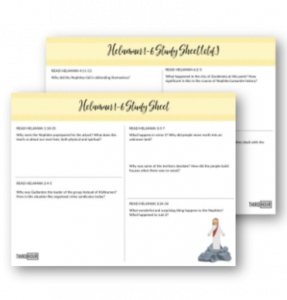 In these writings, we will see the effects of what we call “the pride cycle,” wherein humble people who are grateful for God’s blessings begin to become prideful and persecute those who are less wealthy or accomplished. Wickedness grows during these times. We also see political unrest, organized crime, and war. The Book of Mormon was written for us in our day and there are valuable lessons for us to learn to help us through our current times. Here are a couple of articles comparing Book of Mormon times with our times:

Contention over the judgment seat and war (Helaman 1):

We begin the first book of Helaman with the Nephites heading into serious difficulties. The chief judge, Pahoran, had died and there was a heated contention over which of his sons would succeed him. Pahoran had many sons, but three were contending for the judgment seat (Pahoran, Paanchi, and Pacumeni). Pahoran was elected by the people; Pacumeni joined the voice of the people, but Paanchi and his followers rebelled.

Paanchi was taken and tried and condemned to death, and his followers were angry. They sent Kishkumen to murder Pahoran. Look at verse 11. What is the covenant that Kishkumen entered into with his band? Where did this covenant originate? Go back into the Book of Genesis and see if you can find the covenant with Cain and his band.

Pacumeni took the judgment seat, and then the Nephites in the land of Zarahemla were besieged by a Lamanites army led by Coriantumr, a Nephite dissenter. Look at verse 18. Why were the Nephites unprepared for the attack? What does this teach us about our own lives, both physical and spiritual?

Coriantumr took Zarahemla and marched toward Bountiful. Why was this decision unwise? Look at verses 26 – 33.

Captain Moronihah routed the Lamanites and established peace. Helaman, son of Helaman, became the chief judge. Kishkumen and his band wanted to kill Helaman, too. Look at verse 4. Why was Gadianton the leader of the group instead of Kishkumen? How were the Gadianton robbers like organized crime syndicates today? Are there any governments today that act like Gadiantons? How did Helaman’s servant protect him? (See verses 6 – 10.) Look at verse 16. How can a band of robbers be the cause of the entire destruction of the Nephites?

Nephites on the move (Helaman 3):

At the beginning of Helaman 3, we see the Nephites enjoying a few years without contention. Then what happens in verse 3? Why did people move north into an unknown land? Helaman says they went very far north where they came to large bodies of water and many rivers. The Church makes no definitive statement about where the Book of Mormon people lived in the Americas. Some people think they settled around Guatemala, while others think they settled near the Great Lakes in what is now the US. The “hinterland” approach theorizes that they began in Central America and spread out north. Here’s an article on Book of Mormon geography.

Why was some of the territory called “desolate”? (See verses 5 and 6.) How did the people build houses where there was no wood?

Verse 7 talks about cement. People critical of the Book of Mormon say there was no cement in those times. Here’s some information from Book of Mormon Central. Describe the activities of the people who spread out and north of Zarahemla (verses 8 – 13). Were they industrious and successful? Helaman says they kept many records, but we don’t have them (verses 14 – 16). Here’s an interesting account of where they might be.

Even though contention grew worse in the land, Helaman, son of Helaman, was a righteous judge (verse 20). Helaman had two sons. What did he name them? Why?

Look at verse 23. Things had calmed down a little as far as contentions were concerned. What was their only big problem? Why was it dangerous?

Read verses 24 – 32. What wonderful and surprising thing happened among the Nephites? Why did it surprise church leaders? What happened to ruin it (verses 33 – 34)? How did the righteous respond (verses 35, 36)?

We see in verse 37 that Helaman died, and his elder son Nephi became chief judge, serving in righteousness.

At the opening of Helaman 4, we see affairs among the Nephites in terrible shape. There were dissensions in the church and bloodshed among the people. The most rebellious people were driven out and fled to the Lamanites.

More dissenters followed and they kept trying to stir up the Lamanites to go to war. The Lamanites resisted out of fear, but the Nephite dissenters finally succeeded. They took Zarahemla (verse 5) and drove Moronihah’s armies into Bountiful. The Lamanites had taken all of the Nephites’ holdings in the south. Moronihah and his armies managed to regain half of their possessions. Look at verses 11 – 13. Why did the Nephites fail in defending themselves?

In verses 14 – 16, we see why the Nephites were able to make some progress. What did they do? As you look at your own life, how do you see the Lord’s hand giving you strength beyond your own? Look at verses 20 – 26. The Nephites began to “introspect”—to look inside themselves. What did they see? What did they remember?

Nephi and Lehi devote themselves to preaching (Helaman 5):

Just as Alma had done, Nephi resigned as chief judge in order to preach. What does verse 2 say about the laws of the people? If the people are mostly wicked and have a voice in making laws, what happens to the laws? Look at verse 3. It says that even with good laws, the people would not be governed. Is this happening in your society today, or not?

Look at verses 6 – 13. How did Helaman choose his sons’ names? Nephi and Lehi preached among both the Nephites and the Lamanites. They taught with such power that they confounded the Nephite dissenters, and many were baptized and returned home (verse 17). Also, 8,000 Lamanites were converted (verse 19). But in the land of Nephi, among the Lamanites, Nephi and Lehi were imprisoned in the same prison that had once held Ammon and his brethren. What happened there (verses 22 – 34)?

The Lamanites were confused and terrified, but one Nephite dissenter (Aminadab) stood forth. What did he see (verse 36, 37)? What did Aminadab teach them? How much knowledge of the gospel did Aminadab need at this moment (verses 40 – 41)? What can you do with the small amount of knowledge you have (or had in the past)?

Read through the end of the chapter. This was a great miracle given to unbelievers. What was the grand result?

Verse 1 tells us about the miraculous conversion that happened among the Lamanites, which resulted in most of them becoming more righteous than the Nephites. What happened in the city of Zarahemla (verses 2 – 5)?  This is a momentous occasion in the history of the Nephites. There was free and unhindered discourse and travel for both the Nephites and the Lamanites. Many Lamanites moved north, and Nephi and Lehi went north to teach (verses 6 – 9). Everyone prospered (9 – 14).

It would have been wonderful if this had continued, but Satan was raging in the lead-up to Christ’s sacrifice. Look at verse 15. What happened? Starting in verse 16, we see a swift descent down the slippery slope to evil. In verses 20 and 37, what did the Lamanites do when they became aware of the Gadianton robbers? In verses 21 – 33 and 38 – 41, what did the Nephites do? What was the result (verses 35, 36, 39, 40)?