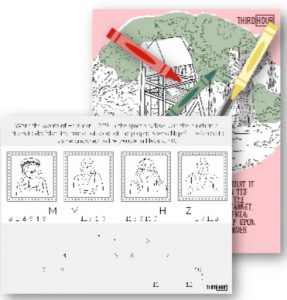 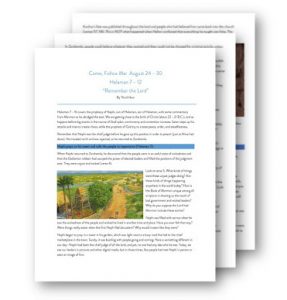 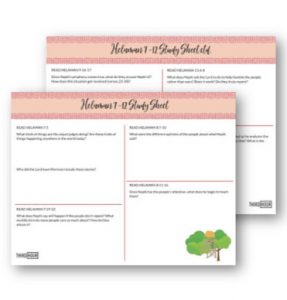 Helaman 7 – 16 covers the prophecy of Nephi, son of Helaman, son of Helaman, with some commentary from Mormon as he abridged the text. We are getting close to the birth of Christ (about 23 – 21 B.C.), and as happens before big events in the course of God’s plan, controversy and contention increase. Satan steps up his attacks and tries to create chaos, while the prophets of God try to create peace, order, and steadfastness.

Remember that Nephi was the chief judge before he gave up this position in order to preach (just as Alma had done). He traveled north and was rejected, so he returned to Zarahemla.

Nephi prays on his tower and calls the people to repentance (Helaman 7):

When Nephi returned to Zarahemla, he discovered that the people were in an awful state of wickedness and that the Gadianton robbers had usurped the power of elected leaders and filled the positions of the judgment seat. They were unjust and wicked (verse 4).

Look at verse 5. What kinds of things were these unjust judges doing? Are these kinds of things happening anywhere in the world today? How is the Book of Mormon unique among all scripture in showing us the result of bad government and wicked leaders? Why do you suppose the Lord had Mormon include these stories?

Nephi was filled with sorrow when he saw the wickedness of the people and wished he lived in another time and place. Have you ever felt that way? Were things really easier when the first Nephi fled Jerusalem? Why would it seem like they were?

Nephi began to pray in a tower in his garden, which was right next to a busy road that led to the chief marketplace in the town. Surely, it was bustling with people going and coming. Here is something different in our day—Nephi had been the chief judge of all the land, and yet, no one had any idea who he was. Today, we see our leaders in pictures and other digital media, but in those times, few people had met Nephi in person or seen an image of him.

Nephi’s lamenting caused a crowd to gather. In verse 14, Nephi begins to speak with them. (See verses 14 – 29.) In verses 19 and 22, what does Nephi say will happen if the people don’t repent? In verse 20, how do we “forget our God”? What do the people care most about and how do they get it (verse 21)? In verse 24, Nephi says the Lamanites are more righteous than these Nephites are. How can we tell that they are more righteous? In verse 29, Nephi explains how he knows all these things. How does he know them?

Nephi announces the murder of the chief judge (Helaman 8):

In the gathered crowd, there happened to be judges who were Gadianton robbers. They were angry about the things Nephi was saying and wanted the people to grab him and drag him down from the tower. Why were they angry? (See verses 3 – 4.) Why were the judges afraid to take Nephi themselves?

The judges whipped up contention among the crowd. What were the different opinions? (See verses 7 – 10.) Since some people were interested and the wicked were afraid to take him, Nephi began to preach. When Jews want to encourage each other, they do so by showing how God has been willing to deliver them in the past, and this means reciting the deliverance from Egypt led by Moses. That’s exactly what Nephi does here (verses 11 – 16). Then he hearkens back to Abraham and all the other holy prophets. In verse 17, Nephi claims that Abraham saw visions of Christ’s coming, and so did all the holy prophets before him and after him. In verse 18, Nephi says “…who were called by the order of God; yea, even after the order of his Son….” How do we know he is talking about the Melchizedek priesthood?

Who were Zenos and Zenock? Why don’t we have their writings? Nephi then moves on to Nephite history, which teaches them that Jerusalem was destroyed (verse 20), that Mulek survived and made it to the Americas. If they can believe that Jerusalem was destroyed, why not believe that Christ will come? Beginning in verse 22, Nephi begins naming their own ancestors who had visions of these things and could testify of them. What accusations does Nephi hurl at them in verses 24 – 26?

In verses 27 and 28, Nephi tells them to go to their judgment seat and see that their chief judge has been murdered by his ambitious brother and that they are both Gadiantons.

Nephi is accepted by some as a prophet (Helaman 9):

Five men from the crowd ran to the judgment seat. They were talking as they went. What did they say? (See verse 2.) Do we test our own prophets this way?

When they found the chief judge murdered, they all fainted (verses 4 and 5). When the chief judge had been murdered, his own servants had run to tell the people. When the people arrived, they saw the 5 men who had come from the crowd at Nephi’s house (verses 6, 7). These people knew nothing about the situation at Nephi’s tower, so they assumed that these 5 men were the murderers. (See verses 8 – 9.)

The next day was the burial and a time of mourning the death of the chief judge (verse 10). Jews hold their burials the very next day after death. The judges who were at Nephi’s tower looked for the 5 men who had run to the judgment seat and discovered them under arrest (verses 11 – 13). The 5 men were questioned and told their story (verses 14 – 15). To the judges that made Nephi seem like a conspirator. Of what did they accuse Nephi (verses 16, 17).

What did the 5 men do when this happened? (See verse 18.) Was this a brave thing to do? Why? Did they succeed when they testified?

Verse 1 of Helaman 10 is pretty entertaining—the people were arguing about Nephi and became so involved in contention, they left Nephi standing alone. He went home, pondering about the events and feeling depressed because of the wickedness of the people. Then he heard a voice (end verse 3 – 11).

This is the same thing that happened to Alma when he left Ammonihah so cast down because he had been rejected. The Lord told both of these worthy servants that they were blessed for their perseverance in righteousness. Look at what the Lord tells Nephi. Nephi “sees eye to eye” as Alma did, which means (verse 5) that he will never ask anything that is contrary to God’s will. Thus, God gives him power to seal on earth and heaven (verse 7); God will sanctify and honor every decision Nephi makes.

Nephi stopped instead of continuing on his way home (verse 12). He went back among the people and began to teach, prophesying their destruction if they didn’t repent. Even after the miracle of identifying the killer of the chief judge, the people hardened their hearts. But when they tried to imprison Nephi, the Spirit stole him away to safety (verse 16). At the end of Helaman 10, the people are so at odds, they are killing each other.

A famine gets the people’s attention (Helaman 11):

At the beginning of Helaman 11, there are wars throughout all the land among all the people of Nephi, spurred on by the Gadianton robbers. In verse 4, Nephi asks the Lord to quell the wars by sending a famine, hoping the people will seek God in their extreme suffering for food. (See verses 4 – 8.) Did it work?

What did Nephi do when he saw the people repenting (verses 9 – 17)? Notice that even though Nephi had the sealing power and God promised to honor any desire, he still approached God in reverence and awe. What does that teach us? Read the story of Samson in Judges 13 – 16. How was Nephi different than Samson? Which traits do you admire?

When the rain started, how did the people react (verse 18)? How does this show that they truly repented? What was the result of their repentance (verses 20 – 21)? In verse 23, we see strife beginning again. But Nephi and his righteous brother Lehi and their brethren were able to bring peace. How? Can you imagine having many revelations daily? What does it mean to have a prayer in your heart always?

In verses 24 – 27, how did the Gadianton robbers gain power again? How did the people fight back (verses 28 – 34)? What condition were the people in at the end of Helaman 11?

Men are unstable and foolish (Helaman 12):