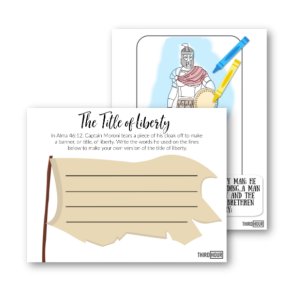 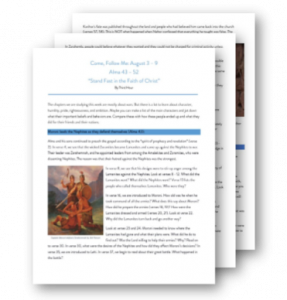 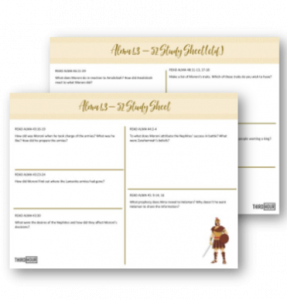 Moroni leads the Nephites as they defend themselves (Alma 43):

Alma and his sons continued to preach the gospel according to the “spirit of prophecy and revelation” (verse 2). In verse 4 we see that the wicked Zoramites became Lamanites and came up against the Nephites to war. Their leader was Zarahemnah, and he appointed leaders from among the Amalekites and Zoramites, who were dissenting Nephites. The reason was that their hatred against the Nephites was the strongest.

In verse 16, we are introduced to Moroni. How old was he when he took command of all the armies? What does this say about Moroni? How did he prepare the armies (verses 18, 19)? How were the Lamanites dressed and armed (verses 20, 21). Look at verse 22. Why did the Lamanites turn back and go another way?

Look at verses 23 and 24. Moroni needed to know where the Lamanites had gone and what their plans were. What did he do to find out? Was the Lord willing to help their armies? Why? Read on to verse 30. In verse 30, what were the desires of the Nephites and how did they affect Moroni’s decisions? In verse 35, we are introduced to Lehi. In verse 37, we begin to read about their great battle. What happened in the battle?

Trying to make a deal with Zarahemnah (Alma 44):

To what does Moroni attribute the Nephites’ success in battle (verses 2 – 4)? What were the beliefs of Zarahemnah? How many chances did Moroni give him? Why wouldn’t Zarahemnah make an oath? How important were oaths even to the wicked? How important are oaths in your culture today? Look at verse 15. Not all the Lamanites were the same or willing to follow Zarahemnah. Look at verses 19 and 20. Finally, Zarahemnah was willing to make a promise. Why?

The beginning of the record of Helaman (Alma 45):

At the beginning of Alma 45, the Nephites are rejoicing because they had been delivered. Did they rejoice in their own strength or give thanks to the Lord for delivering them? In verse 2, we see Alma going to his son Helaman and making sure Helaman’s testimony was strong. What are the questions Alma asked Helaman? How would you answer these questions?

In verses 9 – 14 and 16, Alma reveals a prophecy to Helaman and tells him not to share it with the people. Why doesn’t Alma want Helaman to share the information? What was the prophecy? Look at verse 18. What do you think happened to Alma? What did the church think (verse 19)?

Helaman went forth and began to preach and organize the church. Why was that necessary (verse 21)? What happened in verses 23 and 24? What does it mean to “grow rich in your own eyes”?

We see in verses 1 and 2 that the people who refused to believe or keep the commandments became extremely angry against the believers. Why does this happen? Why can’t they just go their own way and do their own thing?

Starting in verse 37, we see peace again being established in the land. What were the blessings that came with peace?

At the beginning of Alma 47, we see Amalickiah arriving in the Land of Nephi trying to get the Lamanites to go up against the Nephites again. The king was all for it (verse 1) and he sent out a proclamation. How did the Lamanites react (verse 2)? In verse 3, we see the king giving power to Amalickiah, which was just what Amalickiah wanted. They had just met! Why was the king so quick to give Amalickiah this power? What did Amalickiah do (verses 4 – 15)? Look at verse 16. What did Amalickiah really want? How did he reach his goal? (See verses 16 – 31.)

How did Amalickiah deceive the queen? (See verses 32 – 36.) Look at verse 36. What happened to the dissenters from the Nephites? Why did they become more “hardened and ferocious” than the Lamanites?

The second Amalickiah gained the throne, he began to inspire the Lamanites towards war with the Nephites. Look at verse 2. Was being the king of the Lamanites enough power and glory for Amalickiah? What did he want next? Remember that the Lamanites were mostly afraid to go to war the last time. But Amalickiah had stirred them up enough to overcome those fears (verse 3).

Look at verse 5. Whom did Amalickiah choose to be his leaders in war? Why? In verse 6, we see that the Lamanites began to move their troops toward Zarahemla, planning to attack right in the heart of the Nephites’ possessions. In the meantime, what was Moroni doing (verse 7 – 10).

In verses 11 – 13, and 17 – 18, Mormon describes Moroni. Make a list of Moroni’s traits. What do you think of Moroni? Which of these traits do you have or wish to have? How was Moroni different than Amalickiah? Look at verses 14 – 16. What did Moroni teach the people?

What do verses 19 – 20 say about Helaman and his brethren? The Nephites had peace in their own cities, because they were living righteously, but they were forced to defend themselves against the Lamanites, something they didn’t want to have to do. (See verses 23 – 25.) They ended up having wars for many years.

The Lamanites fail in some of their goals (Alma 49):

The Lamanites were seen approaching the city of Ammonihah, which had been rebuilt in part, and fortified by Moroni. Why did the Lamanites think it would be easy for them to overcome Ammonihah (verse 3)? What surprised them when they got there (verses 4 – 11)? They were forced to retreat.

Look at verse 12. Where did the Lamanites decide to attack next? Why? Was that a mistake? (See verses 13 – 24.) Amalickiah was not commanding these armies. How did he react when he got the report of the battles? (See verses 25 – 27.) Look at verses 28 – 30. How did the Nephites react to their victories? If you have already read the Book of Mormon, you know that at the end, Nephites would brag about their own strength when they won battles and would never give glory to the Lord. How are these situations different and what does it mean for the survival of the Nephites?

Moroni never stopped building fortifications around the Nephite cities, and verses 1 – 6 tell us what they were like. 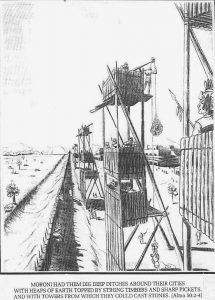 Read verses 16 – 24. What was it like among the Nephites at this time? Why? In verses 25 – 36, we see that their peace was disturbed by a border dispute between the Nephite cities of Lehi and Morianton. Why did Moroni feel like he needed to intervene in this dispute and solve it? What did he do?

In verse 37, the chief judge, Nephihah, passes away. What kind of man was he? Why do you think he refused caring for the records Alma had? (See verse 38.) Who took over the judgment seat from Nephihah? What was the sacred oath of the office?

There was peace among the Nephites until some people began to complain about Pahoran, the chief judge, over certain points in the law (verse 2). Read on through the verses. How did these people want the law changed? Can you remember Old Testament times when the people wanted a king instead of judges? Do you remember why they wanted a king? They wanted to be like the other powerful nations around them with royalty and palaces to show how important they were. In those cases, the prophet appointed a king for them (after warning them how bad it was to have a king), but the Nephites took a vote.

See verse 7. Who won the vote? Who were the king-men, and why did they want kings (verse 8)? Why was this a very bad time to have new contention among the Nephites (verse 9)? We see beginning in verse 10 that Amalickiah decided to come up against the Nephites again. He had lost many of his fighters in earlier battles, so his army was not as strong as it had once been. Amalickiah’s pride and ambition were so strong, he decided again to come up against the Nephites’ strongest city, Zarahemla (verse 11) and he led the armies himself.

Go to a dictionary and look up the word, “vainglory.” Would you use this word when describing Amalickiah? Why do we have the proverb “pride cometh before a fall”? When the king-men heard that the Lamanites were beginning to attack, how did they feel and what did they do (verse 13). How did this make Moroni feel and what did he do about it (verses 14 – 21). Does this sound violent to you? Why was it reasonable for Moroni to go against the king-men and kill many of them?

What happened while this insurrection in Zarahemla distracted the Nephites? (See verses 22 – 28.) Who was Teancum? What was he like? What were his men like? What did Teancum do to Amalickiah? So did Amalickiah get everything he wanted? Why? Why not?

The Nephites had been fighting the Lamanites for years now. After Teancum killed Amalickiah, Amalickiah’s brother became king of the Lamanites, and they retreated back to the city of Mulek. They tried to keep and maintain the cities they had taken.

Beginning in verse 8, Moroni sent orders to Teancum and also a large number of men. What were the orders? Why didn’t Moroni come himself? (See verse 11.) Why did Ammoron go up on the west side of the Nephite cities? (See verses 12 – 14.) In verse 19, we see Moroni, Teancum, and chief Nephite captains holding a war council. They invited the Lamanites out to fight, but they wouldn’t go. So Moroni hatched a plan (beginning in verse 21). What was it? Did it work?