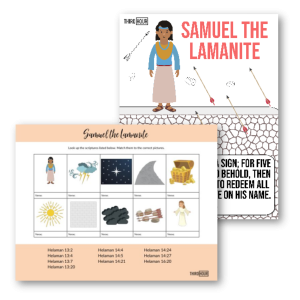 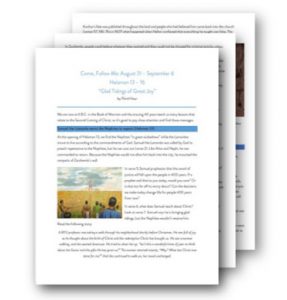 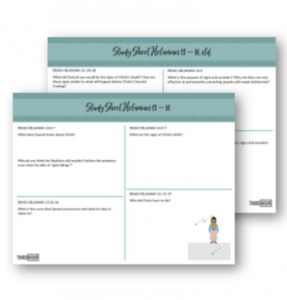 We are now at 6 B.C. in the Book of Mormon and the ensuing 40 years teach us many lessons that relate to the Second Coming of Christ, so it’s good to pay close attention and find those messages.

Samuel the Lamanite warns the Nephites to repent (Helaman 13):

At the opening of Helaman 13, we find the Nephites “in great wickedness” while the Lamanites strove to live according to the commandments of God. Samuel the Lamanite was called by God to preach repentance to the Nephites, but he was cast out (verse 2). Like Alma and Nephi, he was commanded to return. Because the Nephites would not allow him back into the city, he mounted the ramparts of Zarahemla’s wall.

In verse 5, Samuel prophesies that the sword of justice will fall upon the people in 400 years. If a prophet said that to you today, would you care? Or is that too far off to worry about? Can the decisions we make today change life for people 400 years from now?

In verse 6, what does Samuel teach about Christ? Look at verse 7. Samuel says he is bringing glad tidings, but the Nephites wouldn’t receive him. Read the following story.

A BYU professor was taking a walk through his neighborhood shortly before Christmas. He was full of joy as he thought about the birth of Christ and the redemption Christ has brought us. He saw a woman walking, and she seemed downcast. He tried to cheer her up. “Isn’t this a wonderful time of year to think about the Savior and the gifts He has given us?” The woman retorted meanly, “Why? What has Christ ever done for me?” And she continued to walk on, her mood unchanged.

If the gospel is a message of glad tidings, why do people refuse it? Look at verses 8 – 11. What do we lose when we fail to repent and refuse to receive the gospel? Look at verses 12 – 14. How many righteous need there be in a city to keep the Lord from destroying it? Do a scripture search to find the story of Abraham and the pending destruction of Sodom. Lot’s family were the only righteous people in Sodom, and the angels led them out before Sodom was destroyed. If the wicked cast out the righteous, as happened in Ammonihah, then God will destroy that city.

In verses 15 – 17, we see that many cities of the Nephites had descended into wickedness. In verses 18 – 23, 31, and 33 – 36, Samuel pronounces a curse from God upon the land. What is the curse, and what sin does it relate to? In verses 24 – 26, we see that the Nephites have rejected the prophets, and yet they think they are better than the Old Testament people who did the same thing. But the Lord tells them they are even more wicked than the Israelites of old.

Look at verse 37. Remember that the Brother of Jared saw Christ. Christ could not keep Himself hidden behind the veil, because the Brother of Jared’s faith was so strong. The same thing happens in the other direction. If people are wicked enough, demons also reveal themselves. In verse 38, Samuel says the Nephites are going to be destroyed, because they have sought all their lives for happiness in doing iniquity, which is happening all over the world right now. Why do we say that “wickedness never was happiness”?

Samuel prophesies of signs of Christ’s birth and death (Helaman 14):

We don’t have all of Samuel’s prophecies. But he did prophesy of Christ’s birth and death and attendant signs and wonders. In fact, he told them how many years they had until Christ’s birth. If the prophet told you the Second Coming would be in 5 years, what would you do? If you were a Nephite and learned that Christ would be born in 5 years, what would you do? Why are these the same or different?

Look at verses 20 – 28. What did Samuel say would be the signs of Christ’s death? How are these signs similar to what will happen before Christ’s Second Coming? Verses 30 and 31 talk about how we can use our agency to choose life and salvation. God gives us knowledge so we can make choices. Our most important choice is between good and evil.

The Lamanites’ turn to shine (Helaman 15):

This chapter begins with a call to repentance. It reminds us that if we don’t repent, we’ll mourn when judgment comes. There are many times of judgment. Yes, there is the “final judgment” when we are about to be resurrected, but there are milestones in the history of the world where judgments occur. Ammonihah faced judgment—stoned, murdered, and drove out its righteous after refusing to repent—and then was destroyed.

A huge judgment was coming for the Nephite/Lamanite peoples upon the crucifixion of Christ, and the Lord was trying to prepare them. In verse 2, these woes upon those who are too slow to flee are identical to cautions Christ would give regarding the tribulations upon the destruction of Jerusalem in 70 A.D. and then again at the Second Coming.

Verse 3 shows that “where much is given, much is expected.” The Nephites were a chosen people and had received the fulness of gospel. They were sinning against it. Why does the Lord chasten the people He loves? In verses 4 – 17, why has God shown mercy to the Lamanites? In verse 12, what trials would the Lamanites face in the future? In verse 14, why will it be “better” for the Lamanites than the Nephites in the end?

Signs abound leading up to the birth of Christ (Helaman 16):

Some did believe the words of Samuel the Lamanite, and those who did sought for Nephi to baptize them. Those who didn’t believe rose up in anger and used stones and arrows to try to kill him on the wall. None of these projectiles hit Samuel. This seemed like a miracle and it converted more of the witnesses.

Look at verse 4. Nephi was working diligently to cry repentance and baptize. He also showed signs and wonders and worked miracles. Have a discussion about signs and wonders. What purpose do they serve? Why are they not very effective at permanently converting people with weak testimonies? How do they strengthen those of great faith? How do they catch the attention of the wicked? How do they cause some people to repent?

Most of the people did not believe Samuel. When their stones and arrows failed to kill him, they sent their captains to arrest him. But Samuel cast himself down from the wall and went back to teach his own people (verses 6 – 8).

Look at verse 12. Things continued on much the same after Samuel’s visit, with the majority of the Nephites remaining wicked and indeed becoming hardened in their lifestyle. In verse 13, signs and wonders begin to appear as prophesied by prophets. Angels appeared to the “wise” to declare glad tidings (verse 14). Look at verses 15 – 25. How did the wicked rationalize the prophecies, signs, and wonders that had been manifested to the people? How does the same thing happen today?