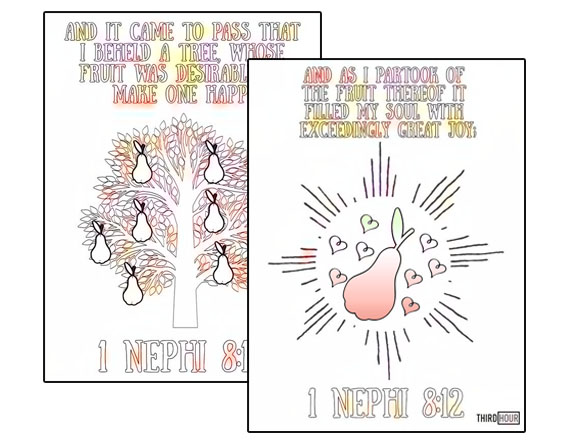 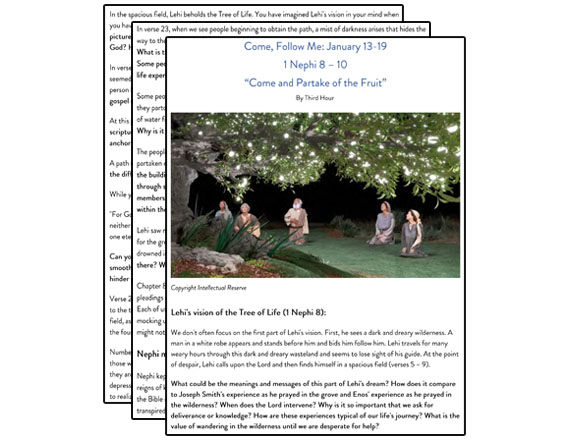 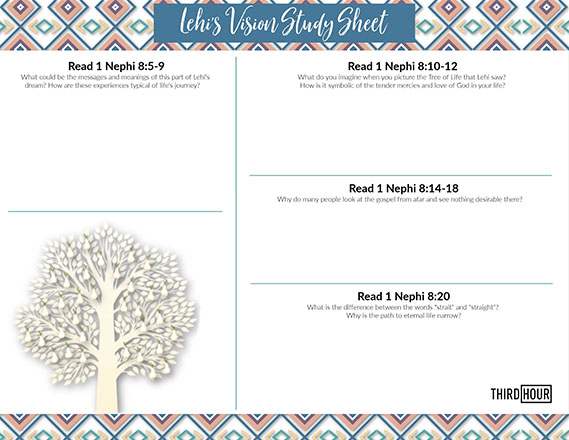 “Come and Partake of the Fruit”

We don’t often focus on the first part of Lehi’s vision. First, he sees a dark and dreary wilderness. A man in a white robe appears and stands before him and bids him follow him. Lehi travels for many weary hours through this dark and dreary wasteland and seems to lose sight of his guide. At the point of despair, Lehi calls upon the Lord and then finds himself in a spacious field (verses 5 – 9).

What could be the meanings and messages of this part of Lehi’s dream? How does it compare to Joseph Smith’s experience as he prayed in the grove and Enos’ experience as he prayed in the wilderness? When does the Lord intervene? Why is it so important that we ask for deliverance or knowledge? How are these experiences typical of our life’s journey? What is the value of wandering in the wilderness until we are desperate for help?

In the spacious field, Lehi beholds the Tree of Life. You have imagined Lehi’s vision in your mind when you have read these verses. What did your own Tree of Life look like? Why do you think you pictured it this way? How was your own version of the tree symbolic of the tender mercies of God? How could the appearance of the tree matter to those seeking it?

In verses 10 – 18 Lehi partakes of the fruit and desires his family to come and partake also. Lehi seemed to intuitively know before he partook that the fruit of the tree was desirable to make a person happy. Maybe this feeling came from the Holy Spirit. Why do many people look at the gospel of Jesus Christ from afar, as Laman and Lemuel did, and see nothing desirable there?

At this point, Lehi sees the rod of iron, which represents the word of God. How does studying the scriptures daily make you want to make your way forward to the tree? How does it help to anchor you to the path? What other “words of God” do we have to help us along the path?

A path runs along by the iron rod to the tree. It is strait and narrow, not straight and narrow. What’s the difference? While you think about this, consider this scripture:

“For God doth not walk in crooked paths, neither doth he turn to the right hand nor to the left, neither doth he vary from that which he hath said, therefore his paths are straight, and his course is one eternal round (D&C 3:2).”

Can you imagine the path being hilly or undulating or strewn with the roots of trees? Or is it smooth and narrow? You are not on this path alone. How can other people on the path help or hinder your progress? Why is the path to eternal life narrow?

Numberless concourses of people are striving to enter the path that leads to the tree. Although those who obtain eternal life are few compared to the number of people who have lived in mortality, they are many. We see this in the Book of Revelation in the final chapters. It’s easy to become depressed when we think about the millions who have not or will not choose eternal life, but we need to realize that millions will be in the Celestial Kingdom and take heart.

Some people make it to the tree and partake of the fruit. We expect that it filled them with joy when they partook, but then they looked around and became ashamed. In verse 26, Lehi mentions a river of water for the first time and on the other side of it, a great and spacious building floating in the air. Why is it symbolic that this grand building has no foundation?

The people in the building are dressed “exceedingly fine,” and they are mocking those who have partaken of the fruit. Some leave the tree and become lost because of this. Why are the people in the building so intimidating that they have so much power over us, even those who have gone through so much sacrifice and work to get to the tree and partake of the fruit? Are there any members of The Church of Jesus Christ of Latter-day Saints in that building? What things within the building are attractive to you so as to tempt you to want to be there?

Lehi saw many people make it to the tree and partake of the fruit. He saw others who were heading for the great and spacious building, not even desiring to start on the path to eternal life. Many drowned in the fountain and many were lost on strange roads. How many forbidden roads are there? Why are they called “broad roads”?

Chapter 8 finishes with Lehi pleading with his wayward sons, Laman and Lemuel. Why didn’t his pleadings work? We are in the midst of an apostasy predicted by earlier prophets of the Church. Each of us has a friend or relative who has rejected the tree and taken another road. Some are mocking us from the great and spacious building. Yet, doing what Lehi did as a sorrowing father might not work for us, either. What other things can we do?

Nephi kept two sets of plates. On one set he recorded more spiritual things and on the other set the reigns of kings and wars and contentions of his people. This is similar to what we see in the books of the Bible called Kings and Chronicles, which must be read together to get a fuller pictured of what transpired in ancient Israel.

The Lord has commanded Nephi to keep the record but Nephi does not know why. Creating and engraving the plates was a difficult and laborious task, but Nephi was obedient even though he did not understand why the Lord required it of him. What examples from your own life are similar?

Lehi was shown magnificent views by God, the kinds of visions experienced by the greatest prophets. Because of these visions, Lehi knows Jerusalem will be destroyed by the Babylonians, something his family and friends have to accept by faith.

Lehi prophesies that after their captivity, the Jews would be able to return to Jerusalem and that six hundred years after its destruction God would raise up a Messiah who would be the Savior of the World. The Jewish vision of the Messiah was already drifting towards a warrior-king like David. Years of focusing on the One God while surrounded by pagans had obviated the need for a spiritual Savior.

Lehi talks about how all the prophets testified of this spiritual Savior. Lehi then prophesies regarding John the Baptist, the Savior’s forerunner. Lehi predicts that the Jews, dwindling in unbelief, would slay the Messiah and that He would rise again. He would manifest Himself through the Holy Ghost to the Gentiles. Lehi explains the purpose of scattering the tribes of Israel and predicts that they would gather again.

As Lehi prophesies, Nephi’s desire grows to “see, hear, and know” that which his father saw. He becomes ready to approach the Lord in prayer that this might come to pass. What if all four brothers had this same desire? Would they all have received what Nephi received? Why or why not?