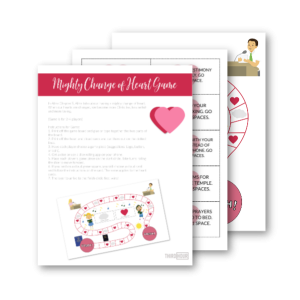 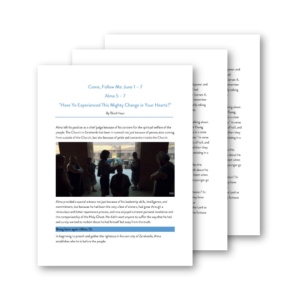 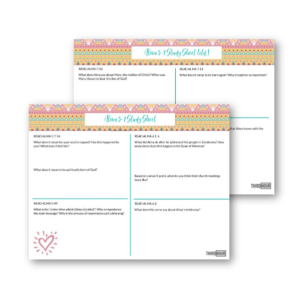 Alma 5—Alma 7: “Have Ye Experienced This Mighty Change in Your Hearts?”

Alma left his position as a chief judge because of his concern for the spiritual welfare of the people. The Church in Zarahemla had been in turmoil not just because of persecution coming from outside of the Church, but also because of pride and contention inside the Church.

Alma provided a special witness not just because of his leadership skills, intelligence, and commitment, but because he had been the very vilest of sinners, had gone through a miraculous and bitter repentance process, and now enjoyed constant personal revelation and the companionship of the Holy Ghost. He didn’t want anyone to suffer the way that he had and surely wanted to reclaim those he had himself led away from the truth.

In beginning to preach and gather the righteous in his own city of Zarahemla, Alma establishes who he is before the people:

Alma then begins to recount the story of his father (verse 3)—that his father had power and authority to establish a church in the land of Nephi, in the land of Mormon. God had delivered his father’s people under bondage to the Lamanites and priests of Noah (verses 4, 5). He reminds his people that they belong to this Church and asks them if they remember the captivity of their fathers and their deliverance (verse 6). Why is God continually asking us to remember? In your group, make a list of the things God asks us constantly to remember. What happens when we forget? How do our lives change?

In verse 7, Alma talks about being “awakened.” Describe the awakening Alma is talking about. What does Alma mean when he talks about “deep sleep” and “darkness”? Brigham Young once described the way that he and many of the righteous who lived in Utah were in a state of salvation because they walked in the light. He said, “They were saved all the time.” In verse 7, Alma says that Noah’s people were “encircled by the bands of death..the chains of hell..and destruction did await them.” And yet, the people thought they were just fine. And then they were converted and left the darkness for the light. How can we know that we are existing in a “saved” state, even during our everyday lives?

In verse 9, Alma says that when the people converted, their “souls did expand.” Has this happened to you? What does it mean? What does it feel like? Alma goes on to talk about his father’s conversion. In verse 12 he says there was a mighty change wrought in his heart when he believed the words of Abinadi. What is this mighty change? Why did Alma the younger go through the same thing? Why didn’t the testimony of his father rub off on him?

In verse 13, why is “enduring to the end in faith” a necessary requirement for exaltation? In verse 14, Alma asks the members of the Church and others who are listening if they have been spiritually born of God. He asks them if they have received “his image in your countenances.” (See also verse 19.) This comment refers to the symbolic role of the Lord as the “great refiner” (see 3 Nephi 24:3). Typically a blacksmith will place silver in the furnace to refine it and he knows when it is refined because he can see his image in it.

The Lord make his face shine upon thee, and be gracious unto thee:

The Lord lift up his countenance upon thee, and give thee peace.

In verse 15, Alma talks about looking forward with an eye of faith to exaltation in the afterlife. How does the knowledge of what we can expect in eternity affect the decisions we make in mortality? When you read verse 16, how does it make you feel? How about verses 17 and 18? Some prophets have said that our deeds are written in our bodies. If so, what happens at judgment to make God a perfect judge?

In verses 18 – 25, we see that eventually, everyone will see their desires, thoughts, and actions in light of the truth. That means that our errors and sins will be clear to us. What a blessing that repentance continues in the spirit world.

In verse 24, Alma talks about sitting down with Abraham, Isaac, and Jacob, who are exalted. If you polled a group of ordinary people, most would have no desire to dwell with prophets and very dedicated religious people. How might their attitudes change when they leave mortality and remember who they really are and could become?

In verses 26 – 30, Alma speaks to those who have already been converted. Have they held onto the spark they once had? Do they have a forgiveness of sin? Are they stripped from pride and constantly humble and teachable?

In verse 31, Alma talks about being prepared. He is referring to being prepared spiritually, for which Christ, the Church, and the prophets have given us every tool we need. Right now, we are in the midst of a pandemic (in 2020) that has brought adversity in many forms, including individual, family, business, state, and national financial trials and even ruin; the breakdown of already unhappy individuals and families; the inability to find and purchase food and supplies; and other trials. The Church has also already given us everything we needed to be prepared for these hardships, including self-reliance programs that teach us how to be financially prepared; food storage advice for decades; the guidance we need to have love and peace in the home; spiritual preparation to help us not to fear but to have hope. For those of us that were not prepared, we can do so for the next famine, pestilence, or disaster we will face.

In verses 45 – 48, Alma begins to testify of how he knows these things are true. He talks about the Holy Spirit and the voice of revelation, but what in his personal experiences has sealed these truths in him?

In verse 49, what is “the order after which [Alma is] called”? Why is repentance the main message? Why is the process of repentance such a blessing? In verse 52, what does it mean that “the ax is laid at the foot of the tree”? In verse 53, how is it apparent by their apparel who is prideful? Can a person be poor and prideful? How and why? In verse 55, Alma calls the people out on a sin that God absolutely will not abide. What is that sin? In verse 58, Alma talks about the “book of life.” In the fall, the Jews have a holiday ordained by God—the Feast of Trumpets. It begins a season of repentance in which they seek to have their names written in the Book of Life. Instead of saying “hello” and “good-bye” to the people they encounter during this holiday, they say “good signature.” Imagine yourself saying this to everyone you meet. How does it make you feel?

Alma orders the Church in Zarahemla, then goes to Gideon to preach (Alma 6):

After Alma addressed the people in the city of Zarahemla, he ordained priests and elders to preside over and guide the Church. How many times does this happen in the Book of Mormon? Why do you suppose it had to be done more than once?

In verses two and three we see that people were received into the Church and some had their membership in the Church revoked. What were their circumstances? In verses 5 and 6, what do you think their church meetings were like?

After he finished his work in Zarahemla, Alma went to Gideon to order the affairs of the Church there. What does verse 8 say about Alma’s testimony?

Alma begins his teaching by saying he had never been to Gideon before. After his arrival from the land of Nephi, he had been fully involved in the affairs of Zarahemla. We can view the societies of the Nephites and Lamanites as “city states.” What is a city state? Do we have any today? How do they govern themselves? How was it different in times past where the only form of communication from city state to city state was by runner?

In verse 4, Alma says the Spirit has witnessed to him that the people of Gideon are righteous. How can one city be righteous and another in the same vicinity full of contention? Do we see this today?

Knowing that the people are softened and teachable in Gideon, Alma begins his speaking by prophesying of the birth of Christ and preparation for that event. He teaches that Christ will come among the people in the Americas. In verse 9, we see a different image for straight paths. Usually the scriptures ask us to prepare by making the paths straight to receive the Lord. But here it says to walk in those straight paths.

In verse 10, Alma talks about Mary, the mother of God. What does he say about her? When was Mary chosen to bear the Son of God? What does Alma say about the mission of Christ (verses 11 – 13).  In verse 14, Alma begins to talk about being born again. What does it mean to be born again? Why is baptism so important?

Then Alma continues to praise the people of Gideon for their faith. He leaves them with a blessing in verse 27. What are the elements of this blessing?