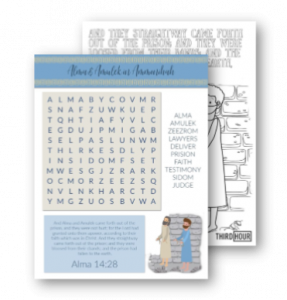 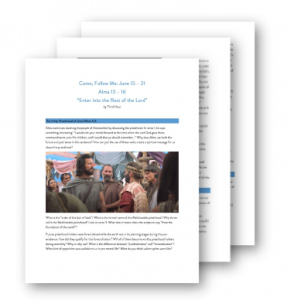 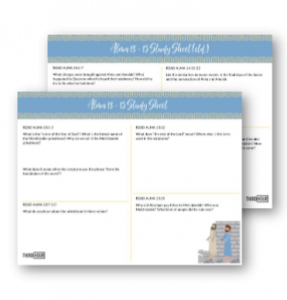 The Holy Priesthood of God (Alma 13):

Alma continues teaching the people of Ammonihah by discussing the priesthood. In verse 1, he says something interesting: “I would cite your minds forward to the time when the Lord God gave these commandments unto His children, and I would that ye should remember…” Why does Alma use both the future and past tense in this sentence? How can just the use of these verbs create a spiritual message for us about the priesthood?

Future priesthood holders were foreordained while the earth was in its planning stages during the pre-existence. How did they qualify for this foreordination? Will all of them become worthy priesthood holders during mortality? Why or why not? What is the difference between “predestination” and “foreordination”? What kind of opposition was available to us in pre-mortal life? What do you think valiant spirits were like?

In verse 4, what do you see that shows Heavenly Father knew who would be valiant and who would harden their hearts during mortality? In verse 6, what do you see as the calling of those who hold the priesthood? What do you learn about the priesthood in verses 7 – 11? Do you see how a transition is made from worthy people in the pre-existence to them being worthy during mortality? In verse 12 we see that many who were foreordained did fulfill their priesthood during mortality, were purified by the blood of the Lamb, and who now have entered their rest in the Celestial Kingdom.

What does “the rest of the Lord” mean? In the Old Testament, during the Exodus out of Egypt, God wanted all of Israel to “enter into His rest” at Mt. Sinai, but they all withheld and refused the responsibility. This was during mortality, and they would have lived on after Sinai. In this case, to “enter His rest” meant to have their “calling and election” to eternal life made sure, and that would have given them the Holy Ghost, and the Second Comforter, Jesus Christ. But their refusal took both away from them, and the higher priesthood with it. They were left to strive with the basic concepts of the gospel—sacrifice and repentance—until they were ready.

Think about what it would be like in the Church today if we did not have the Melchizedek priesthood. Would it even be possible? Discuss.

Alma goes on to talk about Melchizedek. In Hebrew, his name means “king of righteousness.” Abraham was one of our greatest prophets and the father of the Abrahamic covenant. Why do you think he paid tithes to Melchizedek? (See verse 15.) What kind of people did Melchizedek rule over? How did they change under Melchizedek’s guidance? Some scholars think that Melchizedek was Shem. Who was Shem and where did he get his priesthood?

Why do you think Alma chose to talk about the priesthood to this mostly wicked people? In verse 21, he calls them again to repent. In verses 22 and 23, he reminds them that the good news of the gospel is made available to the entire world and that’s why they have received it, even though they have been cut off from Israel and Jerusalem. Alma goes on to say that the Lord is coming soon. He is talking about Christ’s birth, and at that time, they didn’t know exactly when it would be. Later, they would receive more information from the prophets.

Some believe, but they are driven, smitten, and killed by the wicked (Alma 14):

Alma’s preaching had some effect on the people. In verse one, it says “many” believed and began to repent and to search the scriptures. The others were so angry they wanted to destroy Alma, Amulek, and the believers. Why does the preaching of the good word of salvation make some people that angry? What excuses did they begin to formulate to make themselves feel right about their anger? (See verses 2, 3.)

The word “privily” means “privately.” The people wanted to put Alma and Amulek away privately but they changed their minds and took them to their chief judge. Look at verse 5. What charges did they bring against Alma and Amulek? What happened to Zeezrom when he heard their testimony (verse 6)? Why did he feel guilty? How did he try to fix it (verse 7).

The righteous in Ammonihah suffered many things at the hands of the wicked. In verse 7, we see that they were “cast out” and were stoned. Surely, they had to flee from Ammonihah, leaving their homes, farms, possessions, animals, and treasures behind. We’ll see later that they fled to other cities and had to depend on the charity of their fellow Nephites. Where do you see this happening in the history of The Church of Jesus Christ of Latter-day Saints?

In verse 8, we read that women and children were brought together and cast into the fire. (Their scriptures were also burned. Why burn their scriptures?) Alma and Amulek were dragged to the site to watch these innocents being killed. Why did God tell them not to stop the killing? (See verses 10 – 12.) Why would the people not be able to kill Alma and Amulek (verse 13)? How does this remind you of Abinadi?

In verse 15, the chief judge smote Alma and Amulek on their cheeks and taunted them, saying they did not have power to save anyone. What did the Pharisees say about Christ when He was dying on the cross that had a similar message? (See Luke 23:35.) Alma and Amulek were cast into prison. After 3 days important and wicked men came to see them. Alma and Amulek refuse to answer their questions. How does this remind you of the trial of Christ? The men came again the next day and continued to abuse the two prophets and dared them to deliver themselves. They took the prophets’ clothing and kept food from them.

Finally, as related in verse 23, when the leaders visited, smiting them and taunting them, Alma called down the powers of heaven upon them (verse 26). What happened next? The people were so confident and so mean, why did they suddenly become so afraid?

Those righteous survivors who fled Ammonihah had lost much. In further chapters, watch for the cities where they took refuge. As Chapter 15 opens, we see that Alma and Amulek were commanded to leave Ammonihah. Going to nearby Sidom, they found the people who had been cast out and stoned. In verse 2, we see that these people had stories to tell and needed to be healed and succored.

In verse 3, we see that Zeezrom had made his way to Sidom and lay sick with fever because he was tormented by guilt, thinking Alma and Amulek may have been killed because of him, and in agony over his other sins. Zeezrom rejoiced to hear that the two were alive, and he summoned them, hoping to be healed. How would you have reacted if you were Alma and Amulek, knowing the evil that Zeezrom had caused? Beginning in verse 6, what did Alma do?

What did Zeezrom do once he was healed? (See verse 12.) Alma, Amulek, and Zeezrom all had personal conversion stories to tell when they taught the gospel. How were their stories different from each other? In what ways were they the same?

In verse 13, we see that Alma established the Church in Sidom, consecrating priests and teachers. People came from miles around to be baptized. Look in verse 15 to see whether the people of Ammonihah repented.

Look at verse 16. What kinds of sacrifices did Amulek make to serve the Lord? A recently-published book observed that for most millennials and younger people, religion falls far down their list of important things. They reported that they might follow a religion if “they could do it from bed on their cell phones.” How is this different than what Amulek did? What does it mean to lay everything upon the altar?

We see in verse 18 that Alma took Amelek with him to Zarahemla to his own house to “administer unto him in his tribulations and strengthen him in the Lord.” What things do you think Alma did to succor Amulek? What would you do if you were Alma caring for Amulek?

Zarahemla had been peaceful for some years when suddenly there was a cry of war heard in the land. The Lamanites had come up upon Ammonihah and had begun to destroy the city and kill everyone they could.

In verse 3, we see that the Nephites tried to raise an army to defend Ammonihah, but they were too late. But they thought they could save some people who had been carried away into the wilderness. Zoram, the captain of the Nephite army, went to Alma to find out from the Lord where the people had been taken (verse 5). God did answer Alma’s question and told them exactly where to go and that they would be able to reclaim their people (verse 6).

What if the Nephites had been attacking the Lamanites out of vengeance or greed for their property? Would the Lord have answered their petition? Why or why not?

Look at verse 8. Did Zoram and his sons succeed in routing the Lamanites and saving their captives? How many of those captives were saved? What happened to Ammonihah (verses 9 – 11)?

Zarahemla had peace for three more years, during which time Alma and Amulek taught the people. In verse 13, what does it mean that their temples, sanctuaries, and synagogues were “built after the manner of the Jews”? Find out what the Old Testament temples and synagogues were like.

What does it mean in verse 16 that there was no inequality among them? Look at 4th Nephi in the Book of Mormon. How did the people make this happen? God was preparing the people for something described in verse 16. What was it? Are we being prepared for something like it today?

What were the people taught in verse 20 that made them so happy? Do you feel joyful that Jesus will come again?