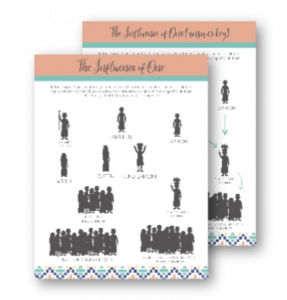 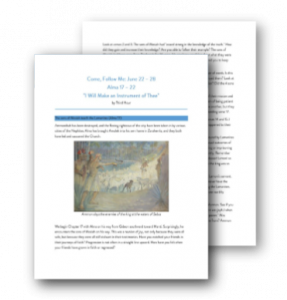 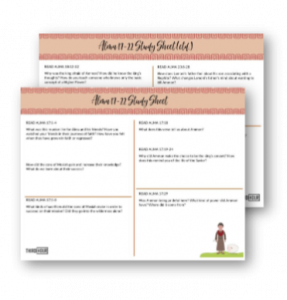 The Sons of Mosiah Teach the Lamanites (Alma 17):

Ammonihah has been destroyed, and the fleeing righteous of the city have been taken in by various cities of the Nephites. Alma has brought Amulek into his own home in Zarahemla, and they both have led and succored the Church.

We begin Chapter 17 with Alma on his way from Gideon southward toward Manti. Surprisingly, he encounters the sons of Mosiah on his way. This was a reunion of joy, not only because they were all safe, but because they were all still stalwart in their testimonies. Have you watched your friends in their journeys of faith? Progression is not often in a straight line upward. How have you felt when your friends have grown in faith or regressed?

Look at verses 2 and 3. The sons of Mosiah had “waxed strong in the knowledge of the truth.” How did they gain and increase their knowledge? Are you able to follow their example? The sons of Mosiah had been gone from Zarahemla for 14 years. No one knew anything about what they were doing or even if they had survived. How have modern communication media helped you to keep track of your loved ones in dangerous situations?

What do we learn about their success from verse 4? This verse mentions the power of words. Is this all that affected the Lamanites so profoundly? What other kinds of power influenced them? Look at verse 5. What kinds of sacrifices did they make in order to succeed on their mission? Did the 4 sons of Mosiah go into the wilderness alone? (See verse 8.)

While they traveled into the wilderness, they fasted and prayed for the success of their mission and they were comforted by God’s spirit. Look at verse 11. What was the value for them of being patient and long-suffering? In verse 13, we see that they “separated themselves” from one another, but they didn’t go their separate ways alone. They each had brethren with them, notwithstanding verse 17.

What kind of people were the tribes of Lamanites they would encounter? (See verses 14 and 15.) What does it mean to be indolent? If the Lamanites worshipped idols, what had happened to their original faith?

What does verse 18 teach us about Ammon? In verse 20, we see that he was captured by Lamanites as soon as he entered the land of Ishmael and taken to the king. What were the usual outcomes of being captured? Lamoni was the king of the Lamanites in this area. Instead of killing or imprisoning Ammon, the king was pleased that Ammon wanted to live among them permanently. Remember that over the years, dissenting Nephites would join the Lamanites, but Ammon pleased Lamoni so much that the king offered him one of his daughters to marry. Why do you think the king was so impressed? (See verse 24.)

There is an important principle we can glean from Ammon requesting to be King Lamoni’s servant. This made Ammon a shepherd, someone who was so unimportant that he might never have the opportunity again to meet the king, nor to influence any important people among the Lamanites. Why did Ammon make this choice? How does his choice remind you of Christ’s own earthly ministry?

Ammon’s adventure at the waters of Sebus is a favorite story from the Book of Mormon. See if you can remember it before you read it again for this lesson. Look at verse 29. Ammon was joyful when the flocks were scattered, because it gave him an opportunity to “show forth my power.” Was Ammon being prideful? What kind of power did Ammon have? Where did it come from? Ammon killed a number of Lamanites during this encounter, but no one is sad about it. Why? What does it tell us about the culture of the Lamanites?

King Lamoni asks Ammon to teach him the gospel (Alma 18):

King Lamoni sought the testimony of his servants about the incident at the waters of Sebus. The servants had the arms of the attacking Lamanites with them to prove their story. In verse 2, how do you know that Lamoni felt guilty?

In verses 9 and 10, what is it that Ammon was doing that impressed the king so much? Why was he impressed? Look at the last sentence in verse 10. Can you imagine the Lord saying this about us?

Ammon went to the king because the horses and chariots were ready. The king was afraid of Ammon. Why? Ammon finally perceived the king’s thoughts through the power of the spirit and gently led the king into a gospel discussion. Note that Ammon began with the little bit that King Lamoni already knew, and he knew only that there was a Great Spirit. How do you teach someone who knows so little? Ammon shows us how.

Look at verse 22. What does it mean to be “wise, yet harmless”? In verse 37, Ammon began to teach King Lamoni the history of their people since they were led out of Jerusalem. This is where things could get really dicey because the Nephites and Lamanites totally disagreed about these events and staked all their hatred on their perceived history. What did the two groups believe about what happened? Ammon had to convince King Lamoni that their view of history was wrong. How difficult could this be in your own country or family history?

Lamoni sees his Redeemer, a Church is established by Ammon (Alma 19):

Lamoni is asleep in the Lord for several days and many think he is dead. His wife calls for Ammon, who knows that King Lamoni is receiving great blessings. Ammon tells the queen this (verse 8). We see in verse 12 that the king arose as Ammon predicted. He immediately begins to testify. What has he learned? In verse 14, why does Ammon kneel to thank God? Soon, all three have fallen because of the Spirit.

Lamanites who behold the scene begin to pray and they also sink to the ground. Who is Abish (verse 16)? How could she alone have a testimony of the gospel among the Lamanites? What do you learn from the fact that God gave a vision to her father? In verse 19, we see the Lamanites beginning to argue over the meaning of what they are seeing—their ruler, queen, and so many others sunk to the ground and a Nephite in their midst. Who defends Ammon? Why?

What happened to the Lamanite who tried to kill Ammon? (See verse 22.) What were some of the Lamanites’ ideas on who or what Ammon might be? People begin to revive in verse 29 because of Abish’s actions. Having revived, the king begins to preach to the people. Do all the people believe? What happens in verses 35 and 36? God had cursed the Lamanites by withdrawing His spirit from them. Why is He blessing them so much now?

Time passes between Chapter 19 and Chapter 20 of Alma—the time it took to establish a church in Lamoni’s kingdom. Once the Church had been established, Lamoni wanted Ammon to go with him to meet his father in the land of Nephi. But the Lord told Ammon not to go, for two reasons—the king would try to kill him, and his brethren were imprisoned in Middoni.

When Ammon told King Lamoni, the king said he would go with Ammon, especially because Antiomno, the king of Middoni, was his friend. On their way, they met Lamoni’s father. Read the story of what transpired in verses 8 – 28. How do you feel about the courage of King Lamoni? What changed his father’s mind about wanting to kill Ammon?

What condition were Ammon’s brethren in when he got them out of prison? How did they bear their sufferings? How successful were they in preaching the gospel?

Back when the sons of Mosiah and their brethren were on the borders of the Lamanites, they had separated into groups to go and teach in different areas. Aaron and his brethren had headed towards a place called Jerusalem. Take a moment for an activity at this point. Use a map of your country, state, or region and locate names of places that have been named for older places. Who had built the Lamanite city of Jerusalem? (See verse 2.)

Look at verse 3. Why were the Amalekites and Ammulonites “harder” than the Lamanites? Look at verse 4. A synagogue is a place of worship and community for Jews. The Nephites were following the Law of Moses looking forward to the coming of Christ. What were the Amalekites and Amulonites worshipping in their synagogues? What happened when Aaron tried to preach in their synagogues?

While the Amalekites argued according to the philosophies of Nehor, Aaron opened the scriptures unto them. Sometimes you might hear someone say how fortunate we are to have the Book of Mormon and they will say that the Nephites didn’t even have these scriptures that have come down to us. The prophets held the brass plates, as well as the small and large plates of Nephi, but there are many verses in the Book of Mormon that show us that people had copies of the scriptures in less permanent forms and that they taught from them.

Aaron’s preaching made the people angry. Do a search in the scriptures for the word “anger” and “angry.” What can you learn about what makes the wicked angry? Aaron and his brethren went over to Middoni hoping for better results (verse 12). Some of them were cast into prison and others fled. After they were rescued, clothed, and fed, what did they do? How hard did they work (verse 16) and what results did they see (verse 17)?

When Lamoni and Ammon returned to Lamoni’s kingdom in Ismael, what did they do (verse 19 – 23).

Aaron was led by the spirit to the land of Nephi to Lamoni’s father. Look at verse 3. What did Aaron and his brethren volunteer to do? How did the king respond? In verse 9 we see that Lamoni’s father also believed in the Great Spirit but didn’t know much else about the gospel. So, like Ammon did, Aaron starts at this point to teach him the gospel. Why does God give us knowledge “line upon line, and precept upon precept”?

Look at verse 15. The king said, “What shall I do?” Many people who are taught by the missionaries receive a witness that the gospel is true but never join the Church. They are unwilling to “do” whatever it takes to reap the blessings of the gospel, which is the same as putting everything on the altar in faith. Without the willingness to “do” or to change, there can be no real conversion and progress stops. How much is Lamoni’s father willing to sacrifice to have the blessings of the gospel? How much are you willing to sacrifice?

After the king prayed for the first time, he sunk to the earth just like Lamoni had done. What happened next? (See verses 18 – 26.) In verse 27, we see that the king made a proclamation throughout all the land. What did it say? What can you learn about the geography of the land and the divisions of the people from the verses that follow?