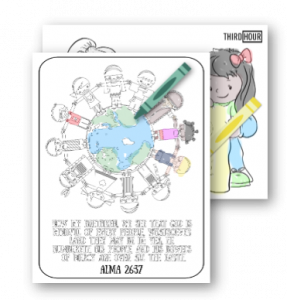 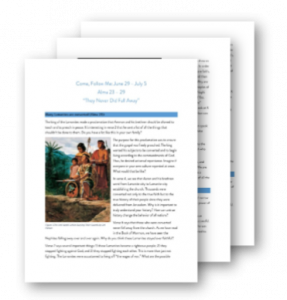 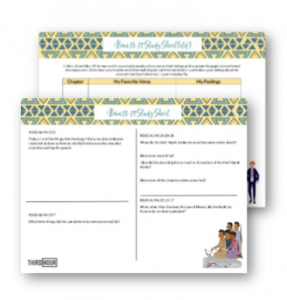 Many Lamanites are converted (Alma 23):

The king of the Lamanites made a proclamation that Ammon and his brethren should be allowed to teach and to preach in peace. It’s interesting in verse 2 that he sent a list of all the things that shouldn’t be done to them. Do you have a list like this in your own family?

The purpose for this proclamation was to ensure that the gospel was freely preached. The king wanted his subjects to be converted and to begin living according to the commandments of God. Thus, he desired universal repentance. Imagine if everyone in your own culture repented at once. What would that be like?

In verse 4, we see that Aaron and his brethren went from Lamanite city to Lamanite city establishing the church. Thousands were converted not only to the true faith but to the true history of their people since they were delivered from Jerusalem. Why is it important to truly understand your history? How can untrue history change the behavior of all nations?

Verse 6 says that those who were converted never fell away from the church. As we have read in the Book of Mormon, we have seen the Nephites falling away over and over again. Why do you think these Lamanites stayed ever faithful?

Verse 7 says several important things: 1) these Lamanites became a righteous people; 2) they stopped fighting against God; and 3) they stopped fighting each other. This is more than just not fighting. The Lamanites were accustomed to living off “the wages of war.” What are the possible wages of war? If you don’t have them anymore, how do you live? What changes must you make in your life that could be very difficult?

In verse 17, we see that the converts gave themselves a name—“Anti-Nephi-Lehies” (anti did not mean “against” as it does for us). They no longer called themselves “Lamanites.” Why? They began to work hard and from that point began to communicate with the Nephites. What does it mean that “the curse of God did no longer follow them?” Remember that the curse of God was not a dark skin, but the withdrawal of God’s spirit from them.

The Lamanites attack the Anti-Nephi-Lehies (Alma 24):

The Amulonites and Amalekites stirred up their people and the Lamanites in their towns to attack the Anti-Nephi-Lehies. Look at verse 2. We talked about the “wages of war.” Wages of war could be land or what you can gain by looting, or even pay from the king to his fighters, but there were no wages in this war, only hatred.

The Amulonites and Amalekites also rebelled against their king. The king was near death and passed the kingdom on to his son, who he named Anti-Nephi-Lehi. This name was probably given to him when he was born, so you can see that years have passed.

Ammon and his brethren saw the preparations for war and came together with Lamoni and Anti-Nephi-Lehi for a conference in the land of Ishmael (verse 5). None of the new converts would take up arms to defend themselves and their king would not command them to. Anti-Nephi-Lehi had given a speech to his people (verses 7 – 16). What did the king give thanks for? What did he commit the people to do with their weapons of war? Why?

Look at the end of verse 18. These converted Lamanites not only buried their weapons of war, but they changed their lives from lives of idleness to lives of industry. Now reflect on the restored church of our day. Since the gospel was revealed, even people who hated the Latter-day Saints were amazed at their “industriousness.” What does it mean to be industrious? How does it relate to being faithful to God?

We see the Amulonites and the Amalekites and the Lamanites they ruled begin to attack in verse 20. They wanted to replace the king and destroy the people out of the land. What did the Anti-Nephi-Lehies do once they were under attack? How many were killed? (See verse 22.) How did the attacking forces react to the actions of the Anti-Nephi-Lehies? How many of the attackers were converted?

Look at verses 29 and 30. Why were none of the attackers who converted Amulonites or Amalekites? Discuss verse 30. Who are the greatest enemies of the Church today?

At the opening of this chapter, we see that the wicked Lamanites increased in anger. Why? They refocused their rage away from the Anti-Nephi-Lehies toward the Nephites in Zarahemla. Explain why they did this.

On their way to Zarahemla, the first city they encountered was Ammonihah. In their anger, they fell upon Ammonihah and killed everyone there in one day. The prophecy of Alma and Amulek against Ammonihah was fulfilled so fast, the armies in Zarahemla could not be mounted fast enough to defend Ammonihah.

As interesting and sad this story is, it is also fascinating how complicated the plots in this part of the Book of Mormon are woven. Review the stories beginning with Zeniff’s party moving into the land of Nephi among the Lamanites. They are very complex and include flashbacks and flashforwards. Joseph Smith likely would not have been able to weave these stories together himself. They help to prove that he was indeed a prophet.

After they destroyed Ammonihah, they attacked the Nephites but instead of winning, they were killed and driven. Among the Lamanites who died were almost all the kindred of Amulon and his associates who were the priests of Noah (verse 4). Verse 5 is a little difficult to understand. Those who weren’t killed grabbed power over the rest of the Lamanites and killed many of them by fire. Look at verse 6 and verse 7 to see why they did this. The Lamanites had begun to repent and remember what Aaron had taught them. They began to be converted in the wilderness, and that’s why they were murdered by Amulonites. They were probably thrown into fire the way the righteous of Ammonihah were.

These murders in turn angered the Lamanites against the Amulonites and they began to chase them and to kill them. The chapter then goes on to explain how the prophecies of Abinadi were fulfilled.

Look at verse 13. When the Lamanites saw they couldn’t win their battles against the Nephites, many of them moved to the land of Ishmael and joined with the Anti-Nephi-Lehies. They became righteous people and buried their weapons of war.

Look at verses 15 and 16. The Nephites had kept the Law of Moses since they left Jerusalem as they were commanded to do, but does salvation come through the Law of Moses? What else did they have to do? Look at verse 17. What two things caused Ammon, Aaron, Omner, Himni, and their brethren to “rejoice exceedingly”?

Chapter 26 opens with Ammon and his brethren rejoicing in the Lord. He feels so blessed because their very risky work among the Lamanites has borne fruit—a miracle. What things in life have brought you the most joy? What is the difference between joy and happiness? Read on as Ammon describes the blessings from the Lord.

Read verse 5. How much work did it take to bring this miracle to fruition? Look at verse 10. Why did Aaron rebuke Ammon? Who was right? Look at verse 16. What is the difference between glorying in the Lord and glorying over your own success?

Look at verse 19 and 20. The sons of Mosiah had been extremely wicked. The Lord could have been justified in destroying them, but instead the Lord chose to exercise mercy and convert them by miraculous means. Why?

The Anti-Nephi-Lehies are delivered (Alma 27):

At the beginning of Chapter 27, we see that the Amalekites are trying to find some way to satisfy their anger. They couldn’t prevail against the Nephites, so now they’re turning their attention back to the Anti-Nephi-Lehies. Again, they tried to destroy them, and again, the Anti-Nephi-Lehies refused to take up arms to defend themselves.

Ammon and his brethren could not stand to witness these righteous people being slain. They went to the king to try to convince him to take his people and flee. The king asked Ammon to get a revelation from God and said he would obey it. He volunteered to offer his people as slaves to the Nephites, but Ammon refused, as this was unlawful. This would make a good discussion. There was slavery in Old Testament times in the Holy Land, and the Law of Moses dictates humane ways to treat them. Why did King Mosiah make slavery illegal? (See verses 8 and 9.)

When Ammon inquired of the Lord, the Lord told him to get the people and flee. He promised to preserve them. When the people approached the borders of Zarahemla, Ammon and his brethren went down to see if the people would welcome the Lamanite converts. Remember that communication had been opened between the two peoples for quite a while. This is when Ammon and his brethren meet Alma and the narrative loops back to the point before their story is told.

The chief judge petitioned the people about whether they desired to welcome the Lamanites (verse 21) and they answered that they would vacate the land of Jershon so the Anti-Nephi-Lehies could inhabit it. They also offered to protect them so they wouldn’t have to break their covenant of peace. Once they moved into Jershon they were called the people of Ammon (verse 26). What kind of people were they? (See verses 27 – 30.)

The Lamanites are defeated in a tremendous battle (Alma 28):

The Lamanites had followed the people of Ammon into the wilderness, and once they were established in Zarahemla/Jershon, they attacked.

Many thousands were killed, mostly Lamanites, but it caused great mourning among the Nephites. Read verse 14. How can there be both sorrow and rejoicing? Read the following story:

I was substitute teaching a class of 6th graders who were studying the American Civil War. The teacher had left a list of instructions. The children were beginning a chapter in their history book about the end of the war and the reconstruction of the South, which had seen devastating battles and destruction as they lost the war. The children came into class and dutifully got out their books and turned to the chapter. I welcomed them and then told them to put their books away. I told them to close their eyes and to look around in their minds’ eye. “What do you see?” I asked them, having set the scene in the South. “I see that my house burned down and my animals are gone,” said one boy. “The bridge is out,” said one girl. “There’s no food to eat,” said another. “The slaves are free but they don’t know what to do or where to go,” said another.” Then we started to talk about reconstruction.

Close your eyes and look around Zarahemla/Jershon. What are things like spiritually, materially, physically? Can you see reasons for mourning and joy?

Alma glories in the Lord and wishes he could cry repentance like an angel (Alma 29):

Why does Alma wish he were an angel? (See verses 1 – 3.) What does verse 4 say about “agency”? Why does the guaranteed agency of God’s children make life both easier and more difficult? In verse 11, Alma begins to talk about how he remembers the captivity and deliverance of his “fathers.” Why is this so important to our faith?