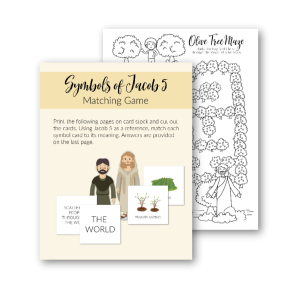 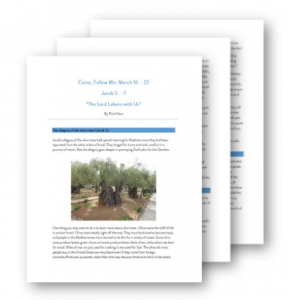 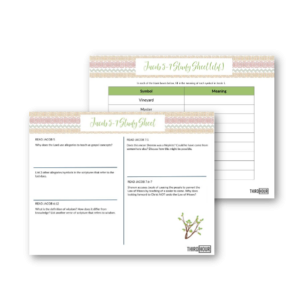 The allegory of the olive trees (Jacob 5):

Jacob’s allegory of the olive trees held special meaning for Nephites since they had been separated from the other tribes of Israel. They longed for home and took comfort in a promise of return. But the allegory goes deeper in portraying God’s plan for the Gentiles.

One thing you may want to do is to learn more about olive trees. Olives were the staff of life in ancient Israel. Olives taste deadly right off the tree. They must be brined to become tasty, and people in the Mediterranean have learned to do this for a variety of tastes. Some olive trees produce better green olives and some produce better black olives, while others are best for wood. Olive oil was not just used for cooking; it was used for fuel.

The olive oils most people buy in the United States are very bland even if they come from foreign countries. Producers purposely make them that way because Americans like it to be nearly tasteless. But olive oils purchased locally in the Middle East, Spain or Italy are full-flavored and dark.

Olive trees are really homely; they are not beautiful trees. But they begin to look stately when they are cared for, while they are hardy enough to grow wild in bleak circumstances. They are able to be grafted, as we can see from Jacob’s allegory. (You might consider doing an internet search on grafting trees to see how that works.)

Although modern olive trees have been bred to produce more quickly, in ancient times it may have taken up to 40 years for an olive tree to bear fruit. Thus, the harvest is really more geared to feed the next generation. Olive trees can live for hundreds of years. Over time, their trunks may split. The tree pictured below is one tree, not many. 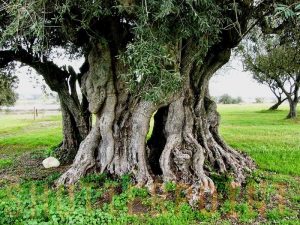 In the Come, Follow Me manual, there is a chart dividing up Jacob 5 into separate sections focusing on different aspects of the allegory. As with biblical parables about vineyards (and in D&C Section 101), the Lord of the vineyard is Jesus Christ. The first section encompasses verses 3 – 14 with the allegory focusing on the time before Christ. Israel is the tame olive tree and it’s dying. What are God’s methods in trying to revitalize the tree?

Verses 15 – 28 deal with the time of Christ. Israel and most of the scattered branches produce good fruit. What does good fruit represent? What does it mean when we say “you can know them by their fruit”? What if we never said anything about the gospel to others? Would they still be able to see our “good fruit”? During this time period when the gospel was being spread through the Roman Empire, why were the Gentiles important?

Verses 29 – 49 refer to the “Great Apostasy.” What was (is) the Great Apostasy? When did it begin? How did it happen? What are the results today?

Verses 50 – 76 deal with the restoration of the gospel. What is happening with the scattered branches of Israel? How does the Lord of the vineyard purify His vineyard? What does he do with the branches which bear bad fruit?

Verses 76 – 77 talk about the Millennium. Is this a happy ending? How does it make you feel about God’s work and your part in it?

A few more questions to consider—Why are there so few servants? What does it mean to be a servant in the vineyard? How hard has God been willing to work to reclaim His children? Does He ever give up?

The Lord will recover Israel in the last days (Jacob 6):

Verse 2 says, “And the day that he shall set his hand again the second time to recover his people, is the day, yea, even the last time, that the servants of the Lord shall go forth in his power, to nourish and prune his vineyard; and after that the end soon cometh.” We’ve already seen that the number of servants will be few. If they are few, how can they go forth in His power?

Verse 4 says “And how merciful is our God unto us, for he remembereth the house of Israel, both roots and branches; and he stretches forth his hands unto them all the day long. If the Lord is trying to reach out to his people incessantly, then why isn’t everyone gathered? Verses 5 to 12 talk about the fact that people still have a choice. They will never be forced and will use their agency even to refuse to follow the Lord. Why does God honor our agency even unto our own destruction?

When the Book of Jacob ends, we are at about 421 B.C., so about 80 years have passed since they left Jerusalem. Unless they absorbed some surrounding peoples, the Nephites would still only number in the few hundreds with many of those being children. Still, they were constantly under the threat of attack from the Lamanites and felt the effects of the sinful and stiffnecked among their own. 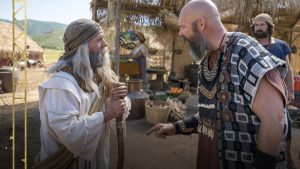 In verse 1 it says, “…there came a man among the people of Nephi, whose name was Sherem.” Does this mean he was a Nephite? Could he have come from somewhere else? Discuss how this might be possible.

Sherem preached that there would be no Christ, and he managed to persuade some people. Because Jacob was well-known for his faith, Sherem sought him out. Verse 4 says that Sherem was learned and had a perfect knowledge of the language of the people and therefore could sway them. Does this sound like Sherem came from outside the society of the Nephites? The Book of Mormon focuses only on the doings of the Nephites, Lamanites, Jaredites, and Mulekites, but the Americas were not empty when they arrived.

In verse 5, we see that Sherem hoped to shake Jacob’s faith. Jacob saw the Savior, enjoyed the ministering of angels, and heard the voice of the Lord as he served as a prophet to his people. What would have become of Jacob if he had indeed denied the Christ with the knowledge he had?

In verse 10 Jacob asks Sherem if he believes the scriptures. Remember that the scriptures the Nephites brought with them were Genesis through part of Jeremiah. Sherem says he does believe the scriptures, but Jacob says Sherem doesn’t understand them, because they testify of Christ. Jacob also bears a personal witness from his own experience that Christ will come and that the atonement is necessary.

Sherem demands a sign (verse 13) but Jacob holds back. Jacob leaves it up to God to smite Sherem if God so desires. Sherem is indeed smitten and while he was in that condition, the Spirit nourished him. Before he died, he requested that the people be brought together, and he testified that the devil had deceived him. When that happened, the people were overcome for a time by the Spirit, which pleased Jacob (verse 22).

Jacob is becoming old and says his good-byes. We see in these last verses that even though the Nephites were in a promised land, they felt like exiles from Jerusalem and missed it terribly. Those who remembered it mourned out their days.

Jacob turns the plates over to his son Enos and makes an end of his writing. The last word in the Book of Jacob is a French word, “adieu,” which literally means “to God.” It was in common use at the time of Joseph Smith and there really isn’t a word in English to match its meaning. That Joseph chose it is not a blemish on the truthfulness of the Book of Mormon.