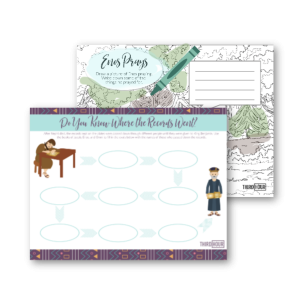 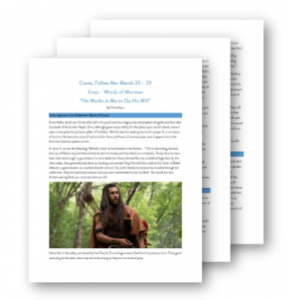 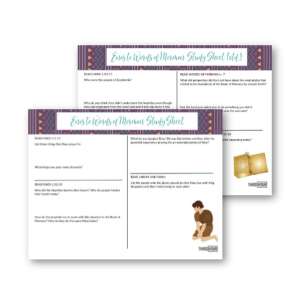 ENOS AND WORDS OF MORMON: “HE WORKS IN ME TO DO HIS WILL”

Enos rejoices in his Redeemer (Book of Enos):

Enos’ father Jacob saw Christ while still in his youth and was a high priest and prophet alongside and then after the death of his brother Nephi. Enos, although given responsibility for the plates upon Jacob’s death, doesn’t seem to be quite the spiritual caliber of his father. We first see him seeking the Lord in prayer for a remission of his sins. He hears the voice of the Lord after hours and hours of sincere prayer, and it appears this is the first time God has spoken to him.

In verse 3, we see the following: “Behold, I went to hunt beasts in the forests… .” This is interesting, because the Law of Moses requires that animals be slain humanely and then bled out completely. Rarely have hunters been talented enough to guarantee a humane death, but those talented few are considered legendary by the Jews today. Jews generally look down on hunting and consider King Nimrod (who ruled at the Tower of Babel debacle), a great hunter, as a symbol of pride and evil. Yes, Lehi’s family hunted as they traveled through the wilderness. They had special permission and even were commanded to eat raw flesh. The Jewish law also forbids wasting flesh; you must eat what you kill.

Note that in the video just shared by the Church, Enos brings home a fowl from his previous hunt. This is good according to the Jews. Jews may eat birds as long as they are not birds of prey.

Enos sought first for his own salvation and forgiveness and then his heart turned immediately to the welfare of his people (verses 9, 10). This is evidence of the change we go through when we truly have the spirit. We desire to do good continually. Then his concern turns to his enemies, the Lamanites (verses 11 – 17). God promises to preserve the plates so the Lamanites would have their words in His own due time.

The Lamanites had constantly been trying to obtain the plates in order to destroy them, so the Lord’s “own due time” had to be when the Lamanites or their descendants would value what the plates contained and would conform to the information there.

At this point, Enos returns to his people and becomes a prophet to them, “…prophesying of things to come, and testifying of the things which I had heard and seen” (verse 19).

Now look at verse 20. Have you ever heard someone in the Church criticize another person for not keeping the Word of Wisdom? Here we see Enos’ dig at the Lamanites for breaking the dietary laws of the Law of Moses:

“And I bear record that the people of Nephi did seek diligently to restore the Lamanites unto the true faith in God. But our labors were vain; their hatred was fixed, and they were led by their evil nature that they became wild, and ferocious, and a blood-thirsty people, full of idolatry and filthiness; feeding upon beasts of prey; dwelling in tents, and wandering about in the wilderness with a short skin girdle about their loins and their heads shaven; and their skill was in the bow, and in the cimeter, and the ax. And many of them did eat nothing save it was raw meat; and they were continually seeking to destroy us.”

According to the Law of Moses, beasts are only clean if they chew the cud and have a cloven hoof. Beasts of prey are completely forbidden. So the Lamanites were eating wild cats. They also only ate raw meat. According to the Law of Moses, blood cannot be eaten. Meat needs to be cooked. Note that the Lord intervened with Lehi’s family in the wilderness. Somehow he changed the raw meat so that it was “sweet” to them.

In verse 21 we see that the Nephites tilled the land and raised flocks of every kind. The descendants of Israel were always shepherds because of the Law of Moses. Note also that horses are listed among the cattle. Although archaeologists and anthropologists are discovering that horses of some type did indeed exist during this time period, we don’t plainly see them being ridden in the Book of Mormon.

In verse 22, Enos says there were exceedingly many prophets, but the Nephites were hardened. They were slow to understand. How can we be immersed in Latter-day Saint culture and learning and still not achieve a witness of the gospel unto salvation? How do the prophets try to work with this situation among the Nephites? See verse 23. Do we see this today?

As Enos ends his one-chapter addition to the plates, he is old and about to die. He has the sure knowledge that he will be exalted. Try to imagine Enos’ life before his remarkable experience while hunting. What do you imagine his life was like before and then after this experience?

The Nephites keep the Law of Moses, looking forward to Christ (the Book of Jarom):

Jarom begins by saying he’s not going to write much. He has had revelations and has prophesied, but feels everything has already been said. Do you ever feel like this when you get up to bear your testimony? Why do you still have something to add even if it’s already been said by someone else?

In verse 3, Jarom also mentions the Nephites’ hard hearts. Yet, among them there are also many who receive revelations (verse 4). How is this like our situation today? In verse 6, Jarom also makes a dig against the Lamanites for breaking the dietary laws…”…and they loved murder and would drink the blood of beasts.” This looks like an extremely serious sin in the same sentence with a not-so-serious sin. Why would Jarom put them together? How does this demonstrate a cultural bias?

Beginning in verse 7, we see that the Nephites prospered in spite of their many wars with the Lamanites. In verse 9, we see why. In verse 10, what does it mean that the prophets “threatened” the Nephites? Why was it necessary? Did it work?

Omni, the son of Jarom, was the next to keep the Nephite record. Omni says he has fought the Lamanites to protect his people but considers himself a wicked man. Two-hundred-eighty years had passed since they first left Jerusalem and they had seen many wars.

Amaron, Omni’s son, then takes over the plates and 320 years had passed. In wars with the Lamanites, the more wicked part of the Nephites had been destroyed. How does this happen that the righteous can be preserved through natural and man-made disasters (verses 6, 7)?

Chemish, Amaron’s brother, then keeps the plates. All he does is testify that it was indeed Amaron who recorded on the plates. Abinadom, his son, takes over and records two verses. Pause for a second and reflect on modern journal-keeping. Are you keeping a journal? Do you have more than two verses to pass onto your posterity? Discuss.

Abinadom says he also fought in wars and that the revelations that the Nephites were receiving are the same as the ones already recorded. Why do prophets keep receiving the same revelations?

In verse 12, Amaleki, the son of Abinadom, is keeping the record. He begins talking about Mosiah I. Mosiah was warned to flee out of the land of Nephi with the faithful. They were led in the wilderness through preaching and prophesying, led by the power of the arm of God, until they arrived into a land called Zarahemla (verse 13 on).

The people of Zarahemla rejoiced because the Lord had sent the Nephites with the plates of brass, which contained a record of the Jews. These people were the Mulekites. Mulek was a son of Zedekiah who had escaped when Zedekiah was taken to Babylon. Remember that Zedekiah’s sons were put to death before his eyes, then he was blinded and put to death. How do you envision Zedekiah’s sons? How does that image change when you learn that Zedekiah was only 32 when he was captured by the Babylonians?

Mulek was likely a child when he escaped the capture of his father and his father’s house. He was most likely rescued by his mother and her attendants, and/or military or household guards. His mother may or may not have been Israelite, because the kings of Judea married “strange” or foreign women to make political alliances. In verse 17, it says, “…and they had brought no records with them; and they denied the being of their Creator; and Mosiah, nor the people of Mosiah, could understand them.” How could the possibility that Mulek’s protectors were not all Israelites make the corruption of their faith and language more likely?

In verse 23, we see that Amaleki was born in the days of King Mosiah. Mosiah dies and Benjamin, his son, reigns. Under Benjamin, the Nephites are able to repel a huge attack from the Lamanites.

Amaleki has no seed, so he delivers the plates to Benjamin, “a just man.” In verse 25, Amaleki exhorts us “…to come unto God, the Holy One of Israel, and believe in prophesying, and in revelations, and in the ministering of angels, and in the gift of speaking with tongues, and in the gift of interpreting languages, and in all things which are good; for there is nothing which is good save it comes from the Lord: and that which is evil cometh from the devil.”

And in verse 26, “And now, my beloved brethren, I would that ye should come unto Christ, who is the Holy One of Israel, and partake of his salvation, and the power of his redemption. Yea, come unto him, and offer your whole souls as an offering unto him, and continue in fasting and praying, and endure to the end; and as the Lord liveth ye will be saved.”

In verses 27 – 30, Amaleki tells us about a certain number of people who ventured to go up to reclaim the land of Nephi. Amaleki’s brother was among them, and he doesn’t know what’s become of them.

This book of scripture fast forwards us about 500 years. The prophet Mormon is witnessing the tail end of the Nephite civilization and writes a few words as he is about to hand the plates over to his son Moroni. He knows that Moroni might witness the entire destruction of the Nephites. In editing the large plates, he finds the small plates. He doesn’t know why the Lord wants him to keep two versions of the same account, but we see the wisdom in the last days, when 116 pages are lost from Joseph Smith’s translation:

“And I do this for a wise purpose; for thus it whispereth me, according to the workings of the Spirit of the Lord which is in me. And now, I do not know all things; but the Lord knoweth all things which are to come; wherefore, he worketh in me to do according to his will” (verse 7).

Has the Lord ever commanded you to do something you didn’t understand? Did you obey? Why or why not? What was the outcome?

In verses 15 and 16, Mormon says that there had been false prophets, false Christs, and false preachers among the people, but their mouths had all been shut. Does this situation exist today?

We learn that there were many Nephites dissented and fled to the Lamanites. But King Benjamin was a holy man who ruled in righteousness, and many prophets taught with power and authority. By these means, peace was established in the land.

At the time we study this, there is much evil and confusion in the world. Benjamin shows that order and righteousness can triumph. How can this happen in our day?