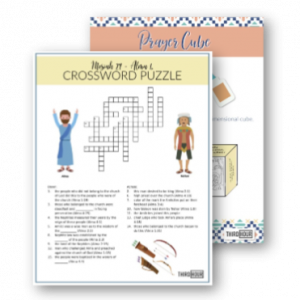 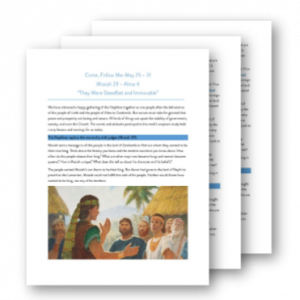 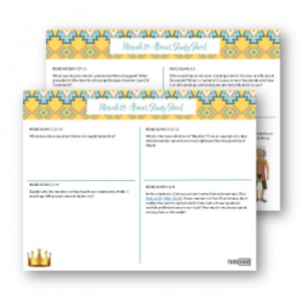 Mosiah 29—Alma 4: “They Were Steadfast and Immovable”

We have witnessed a happy gathering of the Nephites together as one people after the deliverance of the people of Limhi and the people of Alma to Zarahemla. But we can never take for granted that peace and prosperity are lasting and secure. All kinds of things can upset the stability of government, society, and even the Church. The events and attitudes portrayed in this week’s scripture study hold many lessons and warnings for us today.

The Nephites replace the monarchy with judges (Mosiah 29):

Mosiah sent a message to all the people in the land of Zarahemla to find out whom they wanted to be their next king. Think about the history you know and the modern countries you know about. How often do the people choose their king? What are other ways men become kings and women become queens? How is Mosiah unique? What does this tell us about his character and his beliefs?

The people wanted Mosiah’s son Aaron to be their king. But Aaron had gone to the land of Nephi to preach to the Lamanites. Mosiah could not fulfill this wish of his people. Neither would Aaron have wanted to be king, nor any of his brothers.

So, Mosiah sent again to his people (beginning verse 4) explaining to them that Aaron had declined. Mosiah knew that if he awarded the kingdom to any other of his sons, that could cause jealousy, resentment, and even war in the future (verse 7). In verse 9, Mosiah recalls the wickedness that was Aaron’s choice before he repented. Mosiah worried that if Aaron returned to those wicked ways, he would be a wicked king, causing wickedness among his people.

In verse 11, Mosiah suggests a system of elected judges. What precedent did Mosiah have from the scriptures for choosing judges? Why is there a book in the Old Testament called “Judges”?

Beginning in verse 13, Mosiah talks about the advantages of having a righteous king and the trials and dangers of having a wicked king. In verse 20, Mosiah talks about the power of God to deliver us when we are humble, and then he goes back to warning the people about unrighteous kings. What are some of the things that wicked kings do, according to Mosiah?

In verse 31, Mosiah says kings are responsible for the sins of their people if the kings are wicked. How did this prove to be true when King Noah was the king over his father Zeniff’s people? Read about King Manasseh, who ruled over Judea for 55 years. He killed every prophet who lived during his reign and made his people so wicked that not too long after his death, God destroyed the Jews at the hand of the Babylonians. The people of Zarahemla had these scriptures and knew they had been delivered just before this destruction took place.

In verse 32, we see that King Mosiah wanted his land to be a land of liberty and equality, a land of prosperity. At this period, things were quite different back in Jerusalem. The Jews were ruled by the Hasmonean kings (who were Jewish but always beholden to the Assyrians/Greeks). They were very corrupt and the people were not equal, nor were they free. There were no prophets at this time in Judea. Do you think they could have had a society that was free and equal? Why or why not? Look at verse 36. All of these things were happening back in the Holy Land at this time.

Look at verses 38 – 42. How did the people react to the counsel of King Mosiah? How did they become so enthusiastic so quickly? Alma the Younger was made the chief judge. Why (see verse 43)? Was Alma always good and righteous? Do you think his past made him a better judge, or not?

Alma the Elder died at age 82 and then Mosiah died at age 63. This means a new era was dawning in Zarahemla. What were reasons they might have hope for the future?

Mosiah had died and we are in the very first year of the reign of the judges. Laws had been established under Mosiah that were good and true and which the people upheld. A man was brought to be judged who was large and strong (verse 2). Why would this man’s stature be important in the way he influenced the people? What is charisma? Can you name a few people who have it or who are large and strong? Are you impressed by them?

Look at verses 3 and 4. What did Nehor teach? What is priestcraft? What kinds of gain could someone like Nehor hope to get from preaching? What does The Church of Jesus Christ of Latter-day Saints do so that priestcraft doesn’t happen in the Church? In verse 5, we see that Nehor was very successful. Why did the people like him and his preaching?

Look at verse 6. What did Nehor do with his success? Does this happen today? Give a few examples. In verse 7 and 8 we see that when Nehor encountered Gideon, Gideon withstood him with the words of God. Who was Gideon? What kind of personality did he have? Why didn’t he honor Nehor the way so many other people did? What did Nehor do to Gideon?

How is the crime of murder different than the crime of false preaching? What does Alma say when Nehor is brought before him? (See verses 11 – 14.) Look at verse 15. Nehor was put to death for murdering Gideon, but before he died, he swore that what he was teaching was not true. And yet as we read further in the Book of Mormon, we see that many people followed the teachings of Nehor, including the people of Ammonihah. Why would people follow a religion they knew was not true? Does this happen today?

Look at verse 16. It seems that other people found that priestcraft could be a good business. Look at verse 17. What did these people preach? In verse 18, we see that there was no punishment in the law for preaching lies, as long as the preacher believed them, but there were punishments for crimes. In verses 19 – 22, what began to happen among the people?

In verses 22 – 25, we see that there was much trial and affliction in the Church. Some people lost their membership in the Church and some simply left. They persecuted the faithful members. Yet, many members remained humble and faithful. Look at verses 26 – 28. How did they make themselves equal to each other? How did they exercise charity? In verses 29 – 31, what began to happen? The people who were outside the church were seeking riches but didn’t gain much materially. The people inside the church wanted to be equal and help the poor and they became very prosperous. Look at verses 32 and 33 to see why the people outside the church were not happy.

The Nepites had judges to lead them for 4 years. During this time there had been religious contentions and priestcraft. But now in the beginning of the 5th year, political contention reared its ugly head. A cunning man named Amlici, who believed in the philosophy of Nehor, convinced people to honor him and rally around him. They were able to exercise some power and then sought to make Amlici the king. This alarmed the people who were not taken in by him and the members of the church (verse 3).

If Amlici gained leadership over all the people, he would rule in wickedness, because he was a wicked man (verse 4) who desired to destroy the church. People divided into groups and contended with each other. Is this happening in your society today? What happens when there is a lot of contention?

In verse 6, we see that the people voted, and the majority rejected Amlici. Amlici stirred up his supporters (verse 8). They got together and named Amlici king (verse 9). Notice that they “consecrated” him to be their king. What does it mean to be consecrated? This was the pattern in the Old Testament. Why was it a bad thing in Amlici’s case?

Amlici got his followers to take up arms against those who didn’t support him. This is civil war. The Nephites prepared themselves for a defensive war (verses 12, 13). Verses 14 – 21 describe the battle and the Nephites’ pursuit of the fleeing Amlicites. When spies were sent after the Amlicites, they returned in panic because they saw an attacking army of Lamanites (verse 23). The Amlicites joined the Lamanites in Minon, north of Zarahemla and began attacking the Nephites in the area. The Nephites there were fleeing towards Zarahemla (verse 25).

The Nephite armies bore down on the attacking Lamanites and Amlicites as the people fled from Zarahemla. They fought with strength given them by God, and Alma was able to slay Amlici (verse 31). Alma also contended with the Lamanite leader, the Lamanite King pulled back and left his guards to fight (verse 32, 33). The Nephites pursue the Lamanites across the River Sidon to the west, all the way to the wilderness. So many Lamanites died, that their bones were heaped up on the earth (verse 38).

Sometimes in the scriptures, prophets talk about kings and generals as being like cloth or straw that lasts a very short time, or like a dream that vanishes. What happened to the strength, power, and “kingship” of Amlici?

Men bring curses upon themselves (Alma 3):

The Nephites returned home and found that in addition to their own losses, many women and children had been killed. Their farms and flocks had been destroyed (verses 1, 2). We learn in verse 4 that the Amlicites had marked themselves with red on their foreheads, just like the Lamanites. But the Lamanites also sheared their heads and only wore a girdle under their war gear. In verse 6, Nephi says that their skins were dark. The curse of God on the Lamanites was the withdrawal of His spirit. Read verses 6 – 10; 13 – 19. These verses are bothersome to people of color today. What would you say to a person of color who was bothered by these verses?

In verses 11, 12 a new definition is given for “Nephites.” What is it? Later in the Book of Mormon we will see that many of the Lamanites convert because of the diligence of the sons of Mosiah.  There are times that they become more righteous than the Nephites and endure to the end in faith.

In verse 20, we see that the Lamanites tried to attack again but they were defeated. Alma was wounded, so he didn’t go to battle. Beginning in verse 24, we see the Nephites again at peace. Tens of thousands had been killed on both sides. Verses 26 and 27 talk about their eternal rewards.

In the scriptures, God says we can’t serve God and mammon. (See Matt. 6:24; 3 Ne. 13:24). Many members of the Church today don’t realize they are trying to do both. How many of your goals are worldly and how many are spiritual? Even if they don’t conflict, they pull away your attention. How much time do you spend serving God? How much time do you spend serving mammon?

Discuss pride in relation to material possessions. Why is it difficult to convert a person to Christ when they are materially successful? When Alma goes to preach to the Zoramites, we see that the poor were ready to receive the gospel. But the poor can also be hard and prideful. How? Discuss.

In verse 12, we see the wealthy turning their backs on the needy. In the Old Testament, this is the point where God becomes very angry. Yet, in verse 13, we see that there were some truly righteous and charitable people. Beginning in verse 15, we see Alma’s distress because of the situation in the church. He resigns from his position as chief judge and gives the position to Nephihah. Alma retains the position of high-priest and intends to preach full-time.