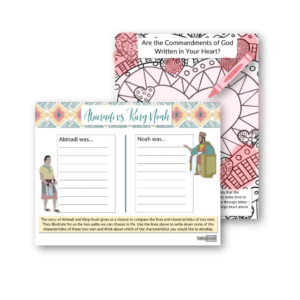 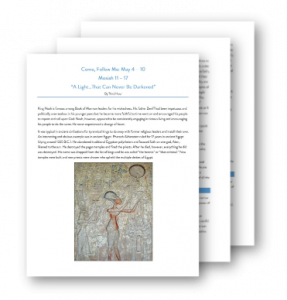 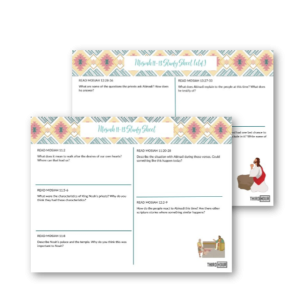 King Noah is famous among Book of Mormon leaders for his wickedness. His father Zeniff had been impetuous and politically over-zealous in his younger years but he became more faithful as time went on and encouraged his people to repent and call upon God. Noah, however, appeared to be consistently engaging in riotous living and encouraging his people to do the same. He never experienced a change of heart.

It was typical in ancient civilizations for tyrannical kings to do away with former religious leaders and install their own. An interesting and obvious example was in ancient Egypt. Pharaoh Akhenaten ruled for 17 years in ancient Egypt (dying around 1335 B.C.). He abandoned traditional Egyptian polytheism and focused faith on one god, Aten, likened to the sun. He destroyed the pagan temples and fired the priests. After he died, however, everything he did was destroyed. His name was dropped from the list of kings and he was called “the heretic” or “that criminal.” New temples were built and new priests were chosen who upheld the multiple deities of Egypt.

King Noah did the same thing. He got rid of the priests who were faithful to the true religion and found priests who would uphold and even participate in wicked behaviors. It appears that these priests also served as judges who protected the interests of the king. Because of Noah, these priests seemed to have read the scriptures, but they did not understand them. Discuss how one evil ruler can influence an entire people and lead them astray.

Verse 2 says that Noah walked “after the desires of his own heart.” He turned away from the commandments of God. What does it mean to walk after the desires of our own hearts? Where can that lead us? Noah had many wives and concubines. Why was that a sin? How could Noah’s huge household create a burden for his people? Noah committed whoredoms and all manner of wickedness and he caused his people also to sin.

Noah taxed his people 20% on everything they owned and made. Go through an exercise where you take 20% of everything you have and earn. How does that compare with the taxes you pay now? What did the people receive in return from King Noah? How did King Noah use these goods and monies (verse 4)? How does Noah compare to King Mosiah and King Benjamin?

In verse 5, we see Noah consecrating new priests who were lifted up in pride. Verse 6 says they were wicked and lazy. Why did they become lazy?

In verse 7, we see that the people became idolatrous. One important way that rulers can make these changes is through festivals and holidays. If a festival for an idol is fun enough, with memorable food, celebrations, decoration, and cultural trappings, the people lay hold upon it and it gets more lavish every year. The culture changes so that the people cannot imagine going without that yearly festival. How has this happened in your own culture? What parts of the holiday are inspiring and which are wasteful and distracting?

In verse 8, we see that Noah was a builder. Many wicked rulers have built beautiful, grandiose things. How do you feel about that? Describe Noah’s palace. Describe the temple. In verse 11 we see the seats for the priests. How were they decorated? Why? What kinds of seats do our own priests have? Why?

Noah also built a high tower near the temple and another on the hill north of Shilom. The tower next to the temple will be important to Noah’s story. There are places in the scriptures that talk about having a watchtower from which the people can be warned. The person on the watchtower can see the enemy “while he is yet afar off” and warn the people. In the Old Testament, the Lord gets angry with the Israelites because they refuse to “see afar off.” Who is our own watchman on the tower? Go to D&C 101 and read the parable that begins at verse 43. How is Noah’s watchtower different than the one in this parable? (See verses 14 and 15.)

In verse 18, we see that Noah’s armies had a small victory against the Lamanites. As a result, the people were lifted up in their pride. The Law of Moses only allowed for war when in defense of family and freedom; it did not allow for military aggression. Prophets were consulted when defensive wars were fought in righteousness. Noah’s people claimed to be living the Law of Moses. Were they?

In verse 20 we see Abinadi begin to preach. It says he was a “man among them,” so he didn’t come from another place. He must have been personally called and instructed by the Lord. He called the people to repentance but (verse 26), that angered the people and they tried to kill him. Why does the word of God anger the wicked? When King Noah heard about it, he ordered Abinadi to be captured, and the people became vigilant, looking for Abinadi.

Look at verse 28. Contention among the people was not something Noah wanted. He wanted peace, but tolerance for sin. How is this typical of many modern societies?

Abinadi didn’t start preaching again until 2 years had passed. When he came among the people again, he came in disguise. Again, he called the people to repentance. The first time, Abinadi told the people that God would not uphold them or hear their prayers, but this time he said the Lord would visit the people in His anger. In verse 2, Abinadi warns the people that if they don’t repent, they’ll be brought into bondage, will be driven and killed. He also warned that the life of King Noah would be of almost no value. Abinadi warns of famine and pestilence. Look up those two words in a dictionary. What do they mean? How do they happen?

Abinadi also mentions hail, east winds, and insects that eat their grain. This is a long list of bad things. Which of these are happening in the world today? How have people suffered because of them? What have our church leaders and members done because of these things?

Again, the people were angry with Abinadi (verse 9) and this time they carried him to the King. In verse 14 the people claim that neither they nor the king have sinned in any way, so the guilt is with Abinadi. It is typical of societies that are about to bring upon themselves the wrath of God that the people think everything is okay—there is no need to make changes or to repent. When the city of Sodom was about to be destroyed, Lot tried to convince his grown children to leave the city, but they laughed at him. When Ammonihah was about to be destroyed, the people reviled the prophets and killed and cast out the righteous because they liked the way things had been going and felt justified in their behavior.

King Noah cast Abinadi into prison (verse 17) and held a council with his priests as to what should be done with Abinadi. The priests began to question Abinadi, but Abinadi was bold and withstood and confounded them. The priests quoted scriptures and asked the meanings. Abinadi was required to teach the priests who should have known and should have been teaching the people. In verse 28, the priest say that they teach the Law of Moses. Abinadi accuses them of not understanding the law, not keeping the law, and not teaching the law.

In verse 32 we see that the priests thought that salvation comes by the Law of Moses. Abinadi recites the first 3 of the 10 commandments to them. He accuses them of breaking them. What are those commandments? (See verses 34 – 36.) How have Noah, his priests, and the people broken these commandments?

The priests, under order from the king, try to grab Abinadi to lead him to his death, but Abinadi is protected by the power of God. Abinadi’s face glows like Moses’ did when he descended from Mt. Sinai. Have you ever been able to tell when someone has a lot of light from the Holy Spirit? Have you ever seen anyone who actually glowed? Can you tell when someone loses that light?

The priests are filled with anger but afraid to touch Abinadi. Abinadi is only concerned with fulfilling the personal commandments God has given to him. He is willing to do that even if it means giving up his life. A person who is willing to do this has perfect faith in eternal life and knows that the death of the body is temporary.

Abinadi goes through the rest of the 10 commandments. In verses 25 and 26 he accuses the priests of not teaching them to the people. He then goes on to teach them that the Law of Moses cannot save us—the atonement is necessary, and true prophets teach of Christ. In verse 30, Abinadi talks about the Law of Moses as a law of performances and ordinances. All of these performances and ordinances are symbolic of Christ. Moses prophesied of the coming of Messiah, as have all the prophets.

Abinadi quotes from Isaiah 53. Christians sometimes talk about how the Jews study all of the Old Testament but this chapter from Isaiah where we so obviously see prophecies of Christ. They are not trying to hide anything. Jews have a study system which goes through the entire “Tanakh” each year then starts over. The Tanakh includes “the law” (the five books of Moses); the “prophets,” and the “writings.” These are sorted and related to each other, but chapter 53 doesn’t hearken properly to other sections. The image of the “suffering servant” begins in Isaiah 52, but the Jews believe the suffering servant is Israel.

Christ is both the Father and the Son (Mosiah 15):

When we have faith in Christ, keep His commandments, and partake in and keep holy ordinances, we become co-heirs with Christ in the Celestial Kingdom. We become His children and are sealed into His eternal family.

In verse 20, Abinadi begins to talk about the resurrection. He talks about the first resurrection for the righteous at the time of Christ’s resurrection. In verse 25, he says little children are innocent and if they die, they are exalted.

The separation of the righteous and the wicked (Mosiah 16):

Abinadi says that everyone will hear the gospel at some point and will have to confess that Jesus is the Christ and God’s judgments are just. What does it mean that the devil has power over some people (verse 3)? Does that mean that their sins are not their fault?

What do we believe about the fall of Adam and Eve? What is physical death? What is spiritual death? How does the atonement of Jesus Christ save us from both?

Alma was a young man but one of the wicked priests of Noah. We can learn something about Alma just from knowing these two things. Alma was chosen for this high position even though he was young. He must have been intelligent and talented, a born leader. But he was either led by cultural tradition, his parents, or the king to believe that there was nothing wrong with upholding wickedness. Alma certainly must have had a familiarity with the scriptures, because Abinadi offered him new, jarring, life-changing insights. Alma was pricked in his heart.

Alma pled with the king not to kill Abinadi, but the king cast Alma out and from then on he was a fugitive. The king had Abinadi cast into prison. After 3 days, Abinadi was given the chance to recant his words, but he would not; he was willing to “suffer unto death” to witness for the truth. King Noah was afraid and was about to release Abinadi, but the priests convinced him to execute Abinadi, who was then burned to death, prophesying that many would suffer the same thing, including Noah himself. How did these prophecies come true?