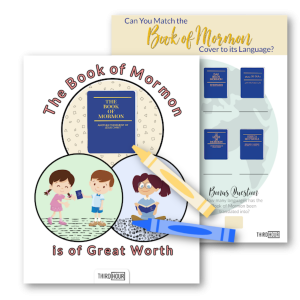 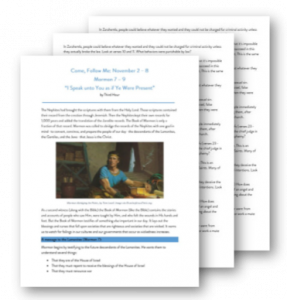 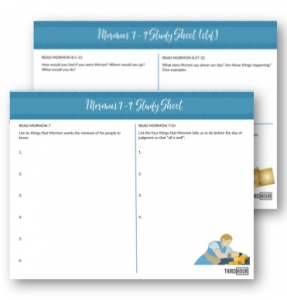 The Nephites had brought the scriptures with them from the Holy Land. Those scriptures contained their record from the creation through Jeremiah. Then the Nephites kept their own records for 1,000 years and added the translation of the Jaredite records. The Book of Mormon is only a fraction of that record. Mormon was called to abridge the records of the Nephites with one goal in mind—to convert, convince, and prepare the people of our day—the descendants of the Lamanites, the Gentiles, and the Jews—that Jesus is the Christ.

As a second witness (along with the Bible) the Book of Mormon (like the Bible) contains the stories and accounts of people who saw Him, were taught by Him, and who felt the wounds in His hands and feet. But the Book of Mormon testifies of something else important in our day. It lays out the blessings and curses that fall upon societies that are righteous and societies that are wicked. It warns us to watch for failings in our cultures and our governments that occur as wickedness increases.

A message to the Lamanites (Mormon 7):

Mormon begins by testifying to the future descendants of the Lamanites. He wants them to understand several things:

Beginning in chapter 8, Moroni, Mormon’s son, is the one who is speaking. He begins by saying that he doesn’t have much to write (partly because there is little room left in the plates and he has no means to make new ones—verse 5) and that he is writing that which was requested by his father.

He begins by referring to the “great and tremendous battle” at Cumorah. Note that this battle did NOT occur at the “Hill Cumorah” where Joseph Smith found the plates. This video explains that:

In verse 3, Moroni tells us that Mormon was killed in this battle. In fact, virtually all of the Nephites were destroyed. Those who fled were hunted down and killed (verse 2). Moroni says that he is the only one left to write about the sad destruction of his people. He has no idea what his future holds. His only purpose is to finish the record and hide it up in the earth (verse 4).

Moroni’s sadness really comes out in verse 5. His father has been killed; he has no family left; he has no friends; he has nowhere to go; he has no idea whether he’ll live another day. Of all the losses we can suffer on this earth, Moroni experienced most of the toughest. Discuss the plight of Moroni. How would you feel? What would you do? Would you feel like there is any value in living? What do you hope happened to Moroni?

Read verses 7 – 9. Why were the Nephites utterly destroyed? Read verses 10, 11. The three Nephite disciples who were translated were taken from the Nephites because of their wickedness. What does Moroni say about them?

Joseph Smith called the Book of Mormon the world’s “most correct book.” Does that mean it is perfect (verse 12, 17)? Read verses 14 – 16. Moroni says the gold plates are of no worth. Why? In verses 21 – 26, what does Moroni say about people who fight against the coming forth of the Book of Mormon and the restoration of the gospel?

Moroni begins this chapter by talking to those who don’t believe in Christ. In the United States the number of people who believe in Christ is decreasing, especially among the “rising generation.” He asks in verse 2 whether they will believe when the Second Coming occurs. What does he say will happen at the Second Coming? Will there be anyone who doesn’t believe at that time (verses 2 – 3)? What does Moroni say the unworthy and unbelieving will face (verses 4 – 5)? What should people do to avoid this fate (verse 6)?

Many Christians say that miracles and the gifts of the spirit do not now exist on the earth. What does Moroni say about this (verses 7 – 24)? Find the spiritual gifts listed in these verses. Find the miracles.

What advice does Moroni give us in verses 25 – 31? How important is the Book of Mormon? In verse 32, Moroni begins to talk about the writing in the Book of Mormon. How was it difficult? Why did the prophets go to so much effort and make so many sacrifices to write it and protect it?