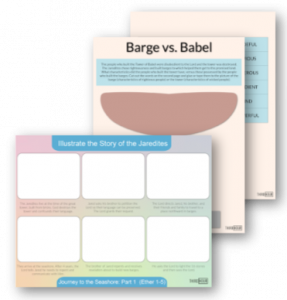 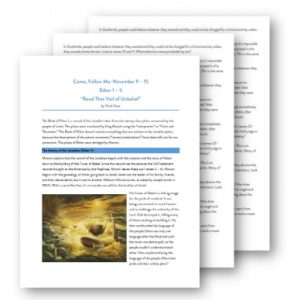 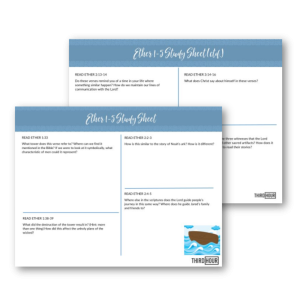 The Book of Ether is a record of the Jaredite taken from the twenty-four plates recovered by the people of Limhi. The plates were translated by King Mosiah using the “interpreters” or “Urim and Thummim.” The Book of Ether doesn’t contain everything that was written in the Jaredite plates, because the descriptions of the satanic covenants (“secret combinations”) have been left out for our protection. The plates of Ether were abridged by Moroni.

The history of the Jaredites (Ether 1):

Moroni explains that the record of the Jaredites begins with the creation and the story of Adam down to the building of the Tower of Babel. Since this record was the same as the Old Testament records brought to the Americas by the Nephites, Moroni leaves these out (verses 3 – 5). Moroni begins with the genealogy of Ether going back to Jared. Jared was the leader of his family, friends, and their descendants, but it was his brother (Mahonri Moriancumer, as stated by Joseph Smith in 1834) who received revelation on behalf of the group. With a name like that, it’s no wonder we call him the brother of Jared.

The Tower of Babel is a fitting image for the pride of mankind. It was being constructed to reach heaven and to challenge the authority of the Lord. God destroyed it, killing many of those working on building it. He then confounded the language of the people (there was only one language after the flood and until the tower was destroyed), so the people couldn’t understand each other. How would confusing the language of the people affect their pride and their unholy plans?

The Lord answered the Brother of Jared as written in verses 40 – 43. What are the promises in these verses? Why do you think the Lord was willing to give these blessings to the friends and family of Jared?

The Brother of Jared cannot be kept from seeing the Lord (Ether 2):

Jared, his family, and his friends were immediately obedient to the revelations received by the Brother of Jared. They migrated northward into the valley of Nimrod. Notice that Nimrod was famous for his hunting ability, but he was remarkably wicked. The Law of Moses later required that animals used for food be slain humanely and this is extremely difficult to achieve when hunting. Therefore, hunting has never been a Jewish pastime and Nimrod has not been admired by the centuries of Jews who lived after him.

Here we see Jared and his people snaring birds alive to take with them, and fish, bees, and seeds. (See verses 2 and 3.) Does this remind you of Noah’s ark? We will see that Jared’s people were also reminded of Noah’s ark by the things they were asked to do. The Lord came down in a cloud to speak with the Brother of Jared and then went before them in a cloud, telling them which way to go (verses 4, 5). Centuries later, the Lord would do the same thing for the Israelites as He delivered them from Egypt. The group continued north to a region where people had never lived. They built barges and crossed many waters (verse 6) as they were directed by the Lord. It appears in verse 7 that there were some nice places to stop, but the Lord wanted to take them to the Promised Land. Read verses 8 – 12. How are they the same as the revelations Lehi would receive about the American continent?

When the Jaredites arrived at the great sea, they camped for 4 years (verse 13). Why did God chasten the Brother of Jared as recorded in verse 14? Why do you think the Brother of Jared petitioned God less often during these 4 years at the seaside? Read verse 15. When a culture becomes ripe in iniquity why does the Lord stop striving with the people? What happens when He withdraws His spirit from them?

Read verses 16 – 17. The Jaredites followed the instructions of God in building their barges. What were they like? Read verse 19. What were a couple of problems with the barges as far as the Brother of Jared could tell? In verse 20, God tells the Brother of Jared how to fix the air problem in the barges. Today, this is simple science. See if you can demonstrate how this works with simple items you can find in your home.

The Brother of Jared sees the Lord (Ether 3):

The story of the lighted stones continues into Ether 3, as explained in the video (verses 1 – 5). Until this time, the Lord had only appeared to the Jaredites from within a cloud. In verse 6, the Brother of Jared is stunned to see the finger of the Lord. If you had only seen and heard a voice from a cloud, what would you have imagined God to be like? A spirit? The Jews still believe God is a spirit, even though there are accounts of prophets speaking with God face to face in the Old Testament. 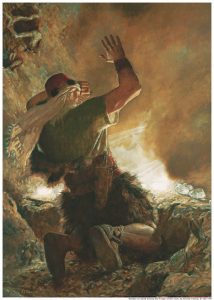 The Lord asks the Brother of Jared some questions. The Lord surely knew the answers beforehand. Why did He ask these questions? (See verses 6 – 12.) In verse 13, the Brother of Jared receives his “calling and election.” This means that Jared was sealed unto eternal life, guaranteed a place in the Celestial Kingdom. Who else in the Book of Mormon received this blessing and promise?

Sealing up and revealing the words of the Brother of Jared (Ether 4):

The Lord commanded the Brother of Jared to write the things he saw (verse 1). Then He forbade these things to be revealed until after His crucifixion and resurrection. King Mosiah kept them and Christ commanded them to be revealed when He visited the Nephites and Lamanites (verse 2). Then Moroni was commanded to seal the writings up again because the Nephites had been destroyed and the Lamanites were so wicked (verses 3, 4). Look at verses 4 – 6. The Brother of Jared saw Christ. This much has been revealed to us. But the visions the Brother of Jared saw are still hidden from us and are part of the sealed portion of the Book of Mormon. Read verse 7. When will we be able to see and read these things?

Read on through the end of the chapter. To whom will the Lord reveal all things? What is the curse upon the wicked?

A prophecy of three witnesses (Ether 5):

When Joseph Smith translated this chapter of Ether, he was overwhelmed with gratitude and excitement! Why? Where can you find the story? Look at verse 6. Eventually, everyone who has ever lived will know the truth about Christ and His prophets. How does that make you feel? 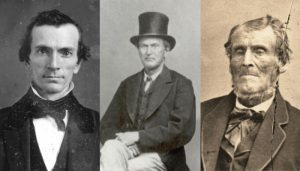