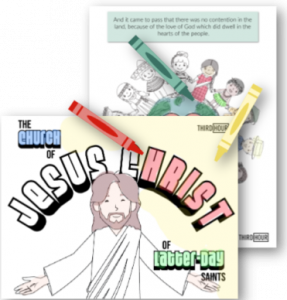 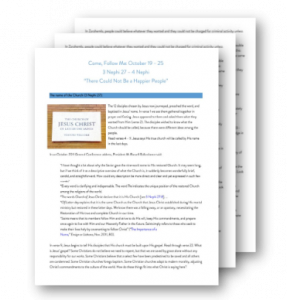 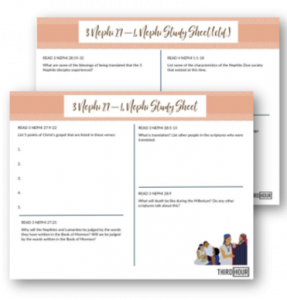 The 12 disciples chosen by Jesus now journeyed, preached the word, and baptized in Jesus’ name. In verse 1 we see them gathered together in prayer and fasting. Jesus appeared to them and asked them what they wanted from Him (verse 2). The disciples wished to know what the Church should be called, because there were different ideas among the people.

Read verses 4 – 9. Jesus says His true church will be called by His name in the last days. Read what President Ballard has to say about the name of the Church.

“I have thought a lot about why the Savior gave the nine-word name to His restored Church. It may seem long, but if we think of it as a descriptive overview of what the Church is, it suddenly becomes wonderfully brief, candid, and straightforward. How could any description be more direct and clear and yet expressed in such few words?

“Every word is clarifying and indispensable. The word The indicates the unique position of the restored Church among the religions of the world.

“Of Latter-day explains that it is the same Church as the Church that Jesus Christ established during His mortal ministry but restored in these latter days. We know there was a falling away, or an apostasy, necessitating the Restoration of His true and complete Church in our time.

“Saints means that its members follow Him and strive to do His will, keep His commandments, and prepare once again to live with Him and our Heavenly Father in the future. Saint simply refers to those who seek to make their lives holy by covenanting to follow Christ” (“The Importance of a Name,” Ensign or Liahona, Nov. 2011, 80).

In verse 9, Jesus begins to tell His disciples that His church must be built upon His gospel. Read through verse 22. What is Jesus’ gospel? Some Christians do not believe we need to repent, but that we are saved by grace alone without any responsibility for our works. Some Christians believe that a select few have been predestined to be saved and all others are condemned. Some Christian churches forego baptism. Some Christian churches adapt to modern morality, adjusting Christ’s commandments to the culture of the world. How do these things fit into what Christ is saying here?

Look at verse 25. Why will the Nephites and Lamanites be judged by the words they have written in the Book of Mormon? Will we be judged by the words written in the Book of Mormon? In verse 27, Christ says the chosen disciples will be responsible for judging the Nephites and Lamanites. How will Christ help them? Look at verses 30, 31. Why is Christ joyful? Look at verse 32. Why is Christ sorrowful?

Jesus asked His disciples what they desired of Him after He would return to His Father. Nine desired to come to him after their mortal lives were over, but 3 wanted to sojourn on the earth and continue to minister. These, Christ translated. What is translation? Who else in scripture was translated? (Answers can include Moses, Elijah, John the Beloved, everyone in the City of Enoch, Alma the Younger, and others.)

In verse 3, Christ promised the 9 that they would live at least 72 years. Why would it be an advantage to know this? Look at verse 5. Why were the 3 worried about their request? Verse 8 describes what ‘death’ will be like during the Millennium for all who live during that time. Read on through verse 10. How can we have a fulness of joy yet sorrow for the sins of the world?

Look at verse 13. This experience corresponds with the biblical account of the event on the Mount of Transfiguration. John the Beloved has written about the event on the Mount of Transfiguration, but we cannot have this account until we are more worthy. Do a scripture chase and see who can find the story in the Bible. Then look at verses 3 Nephi 28:14 and 16. Why can’t we have the Book of Mormon account?

Read verses 19 – 23. The disciples were cast into prison, cast into pits, cast into dens of wild beasts. The people who did these things had survived the terrible destructions that preceded Christ’s coming, because they were among the “more righteous of the people”! And yet, they tried to kill the prophets, who were protected by God. But in verse 23, we see that every single person converted. This is a type of the Second Coming and judgment of the wicked. See how in this article: “Who will Survive the Second Coming of Christ?”

In verses 24 – 32, Mormon explains what the “3 Nephites” will do and says they ministered to him 400 years after Christ quickened them. Mormon goes on to try to explain what “translation” is. What are the blessings of being translated?

Starting in verse 1, Mormon says that the coming forth of the Book of Mormon to the Gentiles would be the beginning of the regathering of Israel. Have a discussion about what has taken place since that time to show that the regathering is happening. Beginning in verse 5, Mormon pronounces “woes” unto certain people. Who are they and what would they do wrong?

What does Mormon have to say to the Gentiles of the future (after the Book of Mormon would come forth)? What would be the sins of the Gentiles? What is their reward for repentance?

By the 36th year of preaching by the disciples, every single person was converted. What was life like for them? (See verses 1 – 3.) Because “faith precedes the miracle,” the disciples were able to perform many miracles openly because of the faith of all the people (verse 5). What is “industriousness”? Why have Latter-day Saints been called “industrious”? How does successful labor fit in with the spiritual message of the gospel? What were these early saints able to accomplish? (See verses 7 – 12, 23.)

Look at verse 13. Why were there no contentions?  (See verse 15.) Do you have contentions in your country today? What does it feel like? Look at verses 16 – 18. What else was missing from their lives? What would it be like if you could trust every single person in your society?

Nephi died (verse 19) and had passed the records on to his son Amos. Amos’ son Amos took over the records when his father died. Beginning in verse 24, trouble arises. What is the cause? Why is pride so dangerous? What happens in verse 25 and 26?

Look at verses 27. Why were there now many churches? Did you know that today there are over 45,000 distinct Christian denominations? Why? Look at verse 29. How can there be a church that denies Christ? Do we have churches like this today? Why did they persecute the righteous? How did they persecute them? (See verses 29 – 35.) In verse 36, we see people dividing again into “-ites.” This same kind of tribal identifying happens in any nation that becomes disorganized and combative. Look at verse 39. What caused the people to hate each other?

Look at verse 42. What caused the Gadianton oaths to be restored? Look at verse 46. How many righteous were left? In verse 47, Ammaron son of Amos takes over the records. What does he do with them? Why?

Read what an apostle had to say about building Zion:

Elder D. Todd Christofferson taught: “Zion is Zion because of the character, attributes, and faithfulness of her citizens [see Moses 7:18]. … If we would establish Zion in our homes, branches, wards, and stakes, we must rise to this standard. It will be necessary (1) to become unified in one heart and one mind; (2) to become, individually and collectively, a holy people; and (3) to care for the poor and needy with such effectiveness that we eliminate poverty among us. We cannot wait until Zion comes for these things to happen—Zion will come only as they happen” (“Come to Zion,” Ensign or Liahona, Nov. 2008, 38).