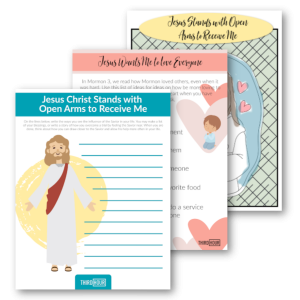 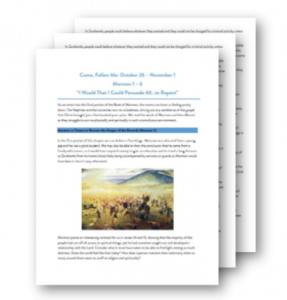 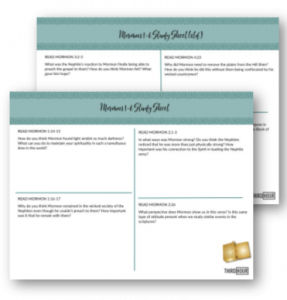 Mormon 1—6: “I Would That I Could Persuade All…to Repent”

As we enter into this final portion of the Book of Mormon, the events can leave us feeling pretty down. The Nephites and the Lamanites turn to wickedness, driving out any semblance of the gospel that Christ brought just a few hundred years prior. We read the words of Mormon and then Moroni as they struggle to survive physically and spiritually in such a tumultuous environment. Despite living in very difficult times, these two exemplary prophets were able to maintain a firm testimony of the Savior. Their words inspire us to keep our hearts centered on the Lord as we, too, experience trials in life.

Mormon is Chosen to Become the Keeper of the Records (Mormon 1):

In the first portion of this chapter, we can deduce a few things. First, Mormon was educated from a young age and he was a good student. We may also be able to draw the conclusion that he came from a family with means, as it would have required money to gain an education and to travel a long distance. Going to Zarahemla from his home as a young boy, he certainly would have been accompanied by servants or guards as protection from highway robbers and worse.

Mormon paints an interesting contrast for us in verses 14 and 15, showing that the majority of the people had cut off all access to spiritual things, yet he had somehow sought out and developed a relationship with the Lord. Consider what it must have taken to be able to find light among so much darkness. Does the world feel like that today? How does a person maintain their testimony when so many around them seem to scoff at religion and spirituality?

Mormon mentions that he dwells in this wicked society, but he is forbidden to preach to them. Why do you think he stayed?  We know the Book of Mormon (the plates translated by Joseph Smith) would not have existed without Mormon’s abridgment and writings. The Lord knew his strength and chose him, just as Esther of old, “for such a time as this.”

Interestingly enough, Mormon was both spiritual and physically strong, mentioning he was large in stature. The Nephites recognized this and selected him to lead their army. Is it possible that his spiritual strength also influenced their decision in an unseen way? There’s no doubt that his connection to the Spirit would have given him wisdom as a leader.

A great deal of death and sorrow are witnessed by Mormon as battle after battle provides a continuous scene of bloodshed.

Mormon mentions that sometime between chapters 1 and 2, he had gone and retrieved the plates as requested of him by Ammaron. It is upon these sacred records that he writes the horrible scenes of war and death that he has been thrust into.

We catch a glimpse into Mormon’s inspired perspective in verse 26. He recognizes that even though the Nephite army was victorious, their confidence lay in the arm of flesh. Lacking any supernatural assistance, they were on equal ground with the Lamanites.

At this point in Mormon’s life, the Lord finally gives him permission to preach repentance (verse 2). Mormon knows this is the only way that the Nephites will be able to succeed in defeating the Lamanites. However, in verse 3 he reveals the results of his missionary efforts are not what he had hoped, because the Nephites continue to harden their hearts.

Additional battles ensue and the Nephites degrade to a level of wickedness that Mormon can no longer stand. Verses 9 and 10 detail how they make various oaths, even swearing by the throne of God that they would obliterate their enemy. Mormon surely knows that this spirit of violence and hatred toward another people can only come from the adversary.

Here, Mormon turns his narration from describing events to providing different insights about these sad circumstances. In verse 12 he gives us an idea of the immense amount of love he had for the Nephites, despite their wickedness. We could all take a moment here to learn from Mormon’s example and show love for those who, at the very least, disagree with us ideologically, let alone those who mock our beliefs.

Next, Mormon attempts to give the reader, specifically the Gentiles whom he addresses by name, a perspective on actions and consequences. He realizes that the behavior of the Nephites and Lamanite won’t just affect them on earth, but that there will be eternal repercussions. He reminds us that we will all be judged and pleads with us to believe in the gospel of Jesus Christ and repent (verses 20-22).

The Lamanites Continue to Defeat the Nephites and Mormon Retrieves the Records (Mormon 4):

This chapter contains many awful details about the violence and bloodshed perpetrated by both sides as battles continue in all parts of the land. The Nephite army begins to crumble and the Lamanites make it a goal to destroy all Nephites, even civilians, as they sweep the land. Knowing that the end of his people is near and that the sacred records could fall into the wrong hands, Mormon finally decides to retrieve them from the Hill Shim. Notice that he uses the phrase “all the records.” We can only assume this was no small task since many of them were written on heavy materials and must have taken up a large amount of space. Whether Mormon hid them in wagons disguised as some kind of trade item or did the task under the cloak of night, we do not know. Another point to ponder is where he stored the records until he took them to the Hill Cumorah (which he refers to in chapter 6).

Words for the Remnant of the House of Jacob and for the Gentiles (Mormon 5):

Mormon, sorrowing at the imminent destruction of his people, repents of his oath to not help the Nephites and once again takes command of the army. His efforts are again in vain as more blood is spilled and fighting continues.

Here, Mormon realizes that the description of so much carnage may be too much for those who will someday be reading the record. He states in verse 9: “And also that a knowledge of these things must come unto the remnant of these people, and also unto the Gentiles, who the Lord hath said should scatter this people, and this people should be counted as naught among them—therefore I write a small abridgment, daring not to give a full account of the things which I have seen, because of the commandment which I have received, and also that ye might not have too great sorrow because of the wickedness of this people.”

He goes on to instruct the remnant of the house of Jacob (Lehi’s posterity) and the Gentiles that the purpose of the record being kept is to persuade people that Jesus is the Christ and to remind them that the Lord will fulfill his covenant with the House of Israel (verses 12-14).

These words bring comfort in a bittersweet way, as Mormon reminds us that the Lord’s purposes will be carried out and that, eventually, the posterity of the Nephites and Lamanites will come back to a knowledge of the gospel that Christ taught them in the flesh just a few hundred years earlier.

Mormon Stores the Records in the Hill Cumorah (Mormon 6):

The Nephites and the Lamanites decide to gather together for their final conflicts. It is quite distressing to imagine a scene of hundreds of thousands of men, women, and children all prepared for war and without the Spirit of God to lead them into battle.

By this time Mormon has realized he must carry all of the records recovered from the Hill Shim and deposit them into a place of storage in the Hill Cumorah. There are few details about this location, although Brigham Young does give the following information in his Journal of Discourses (see this article about the Hill of Cumorah for more information): “Oliver Cowdery went with the Prophet Joseph when he deposited [the] plates. Joseph did not translate all of the plates; there was a portion of them sealed, which you can learn from the Book of Doctrine and Covenants. When Joseph got the plates, the angel instructed him to carry them back to the hill Cumorah, which he did. Oliver says that when Joseph and Oliver went there, the hill opened, and they walked into a cave, in which there was a large and spacious room. He says he did not think, at the time, whether they had the light of the sun or artificial light; but that it was just as light as day. They laid the plates on a table; it was a large table that stood in the room. Under this table, there was a pile of plates as much as two feet high, and there were altogether in this room more plates than probably many wagon loads; they were piled up in the corners and along the walls.”

In time, the battle commences and Mormon reports the casualties, numbering in the tens of thousands. Rather than dwell on descriptions of the scene at hand, Mormon reveals to the reader his great anguish and sorrow in seeing his people fall. Verses 17 to 21 contain some of the most heartbreaking prose in the Book of Mormon and are reminiscent of the parts of 3 Nephi when Christ also laments the destruction that occurred before his arrival to the Americas.

How Could So Many People Have Died at the Battle of Cumorah? by Book of Mormon Central