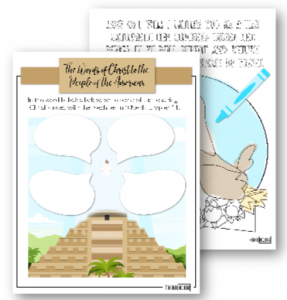 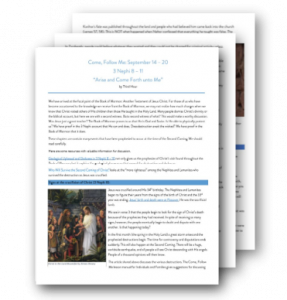 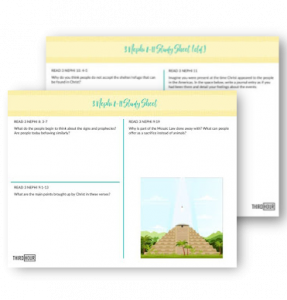 We have arrived at the focal point of the Book of Mormon: Another Testament of Jesus Christ. For those of us who have become accustomed to the knowledge we receive from the Book of Mormon, we may not realize how much changes when we know that Christ visited others of His children than those He taught in the Holy Land. Many people dismiss Christ’s divinity or the biblical account, but here we are with a second witness. But a second witness of what? This would make a worthy discussion. Was Jesus just a great teacher? The Book of Mormon proves to us that He is God and Savior. Is He able to physically protect us? We have proof in the 3 Nephi account that He can and does. Does destruction await the wicked? We have proof in the Book of Mormon that it does. These chapters are types of the Second Coming, also. We should read carefully. Here are some resources with valuable information for discussion:

Geological Upheaval and Darkness in 3 Nephi 8 – 10 not only gives us the prophecies of Christ’s visit found throughout the Book of Mormon, but it explains the geological phenomena that caused the destruction and darkness.

Who Will Survive the Second Coming of Christ? looks at the “more righteous” among the Nephites and Lamanites who survived the destruction as Jesus was crucified.

Signs at the crucifixion of Christ (3 Nephi 8):

Jesus was crucified around His 34th birthday. The Nephites and Lamanites began to figure their years from the signs of the birth of Christ and the 33rd year was ending. Jesus’ birth and death were at Passover. He was the sacrificial lamb.

In the first month (the spring in the Holy Land) a great storm arose and the prophesied destructions began. The time for controversy and disputations ended suddenly. This will also happen at the Second Coming. There will be a huge, worldwide earthquake, and all people will see Christ descending with His angels. People of a thousand opinions will then know.

The article shared above discusses the various destructions. The CFM lesson for Individuals and Families gives suggestions for discussing the darkness that ensued, suggesting that you close the blinds and turn off the lights as an activity. I would suggest moving things around so that your family members no longer know where things are. The people essentially were frozen in place, since the whole land was changed. They couldn’t feel their way through the “thick darkness.” Being stranded in the dark and unknown would have been terrifying. This put people in a “me and God” situation. They could not really interact with each other nor rescue nor support each other. This is the most dependent on God a person can get and it’s an experience of great value, why?

We see later in the Book of Mormon that some of the survivors, who were all among the “more righteous” tried to kill or imprison Christ’s chosen disciples, which doesn’t make them seem like very good people at all. But eventually they all converted and never fell away. God knows who will accept the gospel and that appears to be the important qualification here and probably at the Second Coming. In verses 24 and 25 we see the repentance of these “more righteous” people. These verses give us an inkling of how wicked the others were.

Christ speaks to the people in the darkness. He explains why so many of His children have been destroyed, causing Satan to rejoice. Then He details the destruction of various cities and why they have been destroyed with all their inhabitants. He keeps repeating ”…that the blood of the prophets and the saints shall not come up any more unto me against them.” This means that the people had killed or cast out the prophets and believers. When this happens, there are no righteous in a city to protect it from God’s wrath.

In verse 13, Christ extends an invitation: “O all ye that are spared because ye were more righteous than they, will ye not now return unto me, and repent of your sins, and be converted, that I may heal you?” This is Christ’s invitation to all. The only people who do not benefit are those who refuse this great gift.

Then Christ begins to explain who He is, the creator of the universe, who was with the Father from the beginning, who walked among the people of Judah and was rejected, who has fulfilled the Law of Moses, who is the light and life of the world.

In verse 19, He explains how animal sacrifice is done away. Note that the Mosaic Law is the Aaronic priesthood law and the foundation of the gospel—repentance, baptism, sacrifice. We have now built upon that foundation the gospel of Christ. We still participate and live many aspects of the Mosaic law. It is animal sacrifice that is done away. When people took sacrificial animals to the temple in Jerusalem, part of the ritual was to lay your hands on the head of the animal with the priest doing the same thing and transferring your sins to the animal. Now we place our will upon the altar. We offer ourselves to Christ.

In verse 20, how could the Lamanites have been baptized by fire and not know it? Here’s a great article: Fire and the Holy Ghost by Loren C. Dunn.

The voice of Christ invites the People to embrace the gospel (3 Nephi 10):

After Christ described all the destruction and explaining His nature as the author of salvation, there was silence in the land. Where the people had been crying, howling, and moaning, they were now quiet in total darkness. Verse 2 says it was because they were so astonished. They had experience a “world-ending” destruction. They had no idea where their loved ones were. They surely felt the Spirit pierce them, and they were left to meditate upon their own status before God.

Then Christ spoke again. In verse 4, Christ employs the chicken gathering her chicks under her wing.

Who would reject an offer like this? But at the end of verse 5 we see the line, “…but ye would not.” Look at this image with your family. What are the reasons people would refuse this offer from Christ?

In verse 7, after repeating this image several times, Christ says that if they turn away, “the places of your dwelling shall become desolate.” They had proof that this could surely happen. After Christ said these words, the people began to weep and howl again for their lost family members and friends.

At the end of the 3 days, the darkness dispersed and the ground stopped shaking. The mourning of the people turned to joy and they rejoiced and gave thanks to God. Verse 12 explains who had been saved. Verse 14 assures us that all of these destructions were prophesied. The people had plenty of warning. Do we have enough warnings today of those things which will happen before the Second Coming? Do we know what to do to be prepared?

Christ appears in person to the Nephites and Lamanites (3 Nephi 11):

A multitude of people gathered at the temple in Bountiful marveling at the results of the destruction and what Christ had told them. While they were doing this they heard a voice out of heaven. What was the nature of the voice and how did it affect the people? Why, seeing that it was a small voice, did it pierce them, cause them to shake and their hearts to burn (verse 3)? All of us will someday stand before God at judgment. How many of us will react this way?

The voice spoke 3 times. Why? (See verse 5.) Who was speaking (verse 7)? How does this remind you of the First Vision of Joseph Smith? What does it teach you about the nature of the Godhead?

In verse 8, Christ descends and yet the people still don’t understand. They think He might be an angel. With all that they had been taught by the prophets and the introduction the Father had given, why do they still not realize that this is the Christ?

How does Christ introduce Himself? Why does He need to explain what He did among the Jews? In verse 12 we see that the people finally understood and fell to earth, remembering what they had been taught. Have you ever been slow to receive the teachings of your parents and church leaders? Do you have an experience where things began to clarify in your mind and heart?

There were about 2,500 people gathered at the temple, yet we see in verses 14 – 15, that each one was invited to touch Christ and see for themselves the wounds from His crucifixion. Why? How would this increase their ability to testify to those who were not present? Christ was resurrected, and in the resurrection all of our wounds and disabilities are healed—BY CHOICE. Why did Christ choose to keep the wounds in his hands, feet, and side?

Look at verse 17. What did the people do when they had all personally felt His wounds?

At this point, Christ begins to call disciples to teach and baptize. The first was Nephi. Look at verse 21. Why did Nephi need “power” to baptize? What was/is this power? Then Christ gave instructions on how to baptize (verses 22 – 28). Why is it important to baptize according to these instructions?

Look at verses 29 – 30. What does Christ say about the spirit of contention? Does the spirit of contention exist in your culture? Look at verses 31 – 34. What is Christ’s doctrine? Note that the word “damned” does not (in our church) mean a person is “going to hell” forever. It means to be separated from God. In the Celestial Kingdom we are in God’s full presence, but the other kingdoms of heaven are separated from Him in some degree.

Look at verses 35 – 41. Why is repentance so important? How do we become like little children? Why is it so important to be baptized? How do we build upon the rock of the gospel? In verse 41, what does He tell the people, and especially the disciples, to do?