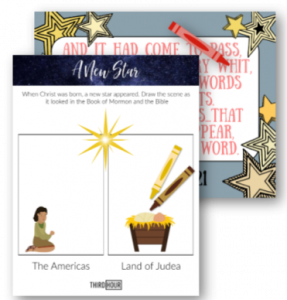 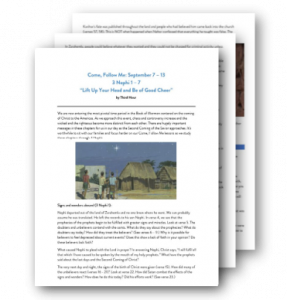 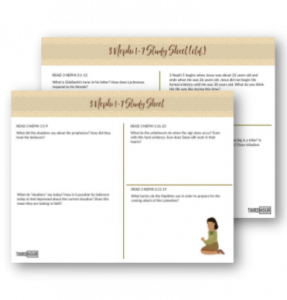 We are now entering the most pivotal time period in the Book of Mormon centered on the coming of Christ to the Americas. As we approach this event, chaos and controversy increase and the wicked and the righteous become more distinct from each other. There are hugely important messages in these chapters for us in our day as the Second Coming of the Savior approaches. It’s worthwhile to sit with our families and focus harder on our Come, Follow Me lessons as we study these chapters through 4 Nephi.

Nephi departed out of the land of Zarahemla and no one knew where he went. We can probably assume he was translated. He left the records to his son Nephi. In verse 4, we see that the prophecies of the prophets begin to be fulfilled with greater signs and miracles. Look at verse 5. The doubters and unbelievers contend with the saints. What do they say about the prophecies? What do doubters say today? How did they treat the believers? (See verses 6 – 9.) Why is it possible for believers to feel depressed about current events? Does this show a lack of faith in your opinion? Do these believers lack faith?

What caused Nephi to plead with the Lord in prayer? In answering Nephi, Christ says, “I will fulfil all that which I have caused to be spoken by the mouth of my holy prophets.” What have the prophets said about the last days and the Second Coming of Christ?

The very next day and night, the signs of the birth of Christ were given (verse 15). How did many of the unbelievers react (verses 16 – 21)? Look at verse 22. How did Satan combat the effects of the signs and wonders? How does he do this today? Did his efforts work? (See verse 23.)

Look at verse 24. Why did some people think that the Law of Moses had now been fulfilled? How did they misunderstand the scriptures? Why was Jesus’ crucifixion necessary to fulfill the Law of Moses? Look at verse 25. It’s important to understand that the Law of Moses was not done away with, but that it was fulfilled. What’s the difference? In the temple, we learn the foundational laws of Moses as part of the lesser or Aaronic Priesthood law, that is, repentance and sacrifice. These are the foundation of gospel today just as in Moses’ time. As we advance to terrestrial and then celestial laws, what laws are added? (Discuss a broken heart and a contrite spirit, the gospel written in our hearts, chastity of body and spirit, and the law of consecration.)

Most of the people continued in peace and happiness because of the miracles and signs that were occurring, but the Gadianton robbers murdered people (verses 27 – 28.) Look at verses 29, 30. What was happening among the “rising generation” of Lamanites, the children and young people? How does this happen? Is it happening today?

The Nephites and Lamanites gather to protect themselves (3 Nephi 2):

What happened as written in verses 1 – 3? Why is it so easy to forget or not to be impressed by spiritual miracles? Look at verse 7. Jesus was 9 years old at the time. How do you picture Him?

In verse 11, we see wars and contentions throughout all the land with the Gadianton robbers increasing in power and number. Threatened with destruction, the Nephites and Lamanites gather to defend themselves (verses 12 – 19). In verse 19, why were the people in danger of destruction?

Lachoneus was the governor and he received a letter from the captain of the Gadianton robbers, Giddianhi. Why was Lachoneus surprised by the content of this letter (verse 11)? How did the Giddianhi twist the truth? Why wasn’t Lachoneus frightened (verse 12)? What did he have the people do (verses 12 – 20? Why did Lachoneus forbid to go up against the robbers (verse 21)? (The Law of Moses only justifies defensive wars.)

The people gathered together for their own protection and to defend themselves (verses 22 – 26). Why does gathering together give people strength? How do we strengthen each other today? Will there be a time when the Saints gather again?

The Nephites triumph over the Gadiantons (3 Nephi 4):

The Nephites had gathered together from the outermost cities and those cities were taken by the robbers. Did they prosper in those cities? Why not? (See verses 1 – 4.) Look at verse 5. Why did the robbers have to attack the Nephites?

What does Nephi say about how the Gadiantons looked (verse 7)? Did this have an effect on the Nephites (verses 8, 9)? The Nephites had provisions for all their people, but the robbers had very little. Read through verse 29. How did the Nephites triumph? How did God help them? In verses 30 – 33, how did they give credit for their victory to God?

3 Nephi 5 begins when Jesus was about 22 years old and ends when He was 26 years old. Jesus did not begin His formal ministry until He was 30 years old. What do you think His life was like during this time?

Look at verses 1 – 3. How many of the Nephites were believers at this time? What did they do to the prisoners they had taken from among the Gadiantons? (See verses 4 – 6.) Look at verses 8 – 10. Many signs and wonders, prophecies and church work were done during these years, but they are not recorded in the Book of Mormon. In verse 9, we see that there is a record of these things. Maybe someday we will have this record.

There is a huge lesson for us in this chapter, which begins in 26 A.D. In just a few years, the Nephites go from being completely righteous to the opposite extreme. We need to read and figure out why and realize the same thing may happen to us or could be happening to us. The closer we get to the Second Coming, the harder Satan will work. Is Satan “raging in the hearts of men” today?

The Nephites were all able to return to their homes, having defeated the Gadiantons, and they even had supplies left to take with them. They had rejoiced as a nation and given thanks to God for their victories. They had just laws, peace, and prosperity (verse 4). Look at verse 5. There were no barriers to peace and prosperity except their own righteousness or wickedness. They rebuilt and repaired damaged cities and cast up roads.

Read verses 10 – 18. What happened to the people and how did they sink into wickedness just as Christ was beginning His ministry in the Holy Land? God sent forth holy men to bring them to repentance (verse 20). Why did this make the people angry? What did wicked judges do to the prophets? (See verses 21 – 26.) How did bringing these judges to justice destroy the government? (See verses 27 – 30.)

The separation of the righteous from the wicked (3 Nephi 7):

The wicked kill the chief judge and the government falls apart. The people separate into tribes. Tribalism is the very most basic form in which people organize themselves. Who can be part of a tribe (verse 14)? How big is a tribe? Is there tribalism today even in big countries? Does tribalism increase or diminish peace?

Were “secret combinations” involved? (See verse 6.) How many righteous people were there at this time (verse 7)? How many years did it take to destroy the government and for most of the people to become wicked (verse 8)? Look at verses 9 and 10. Why was Jacob labeled as an anti-Christ?

In the thirty-first year a few people were converted (verse 21). In the thirty-third year many were baptized (verse 26). This means Jesus was 33. Jesus died as He was about to turn 34. So this was a last-ditch effort to save the people from utter destruction.