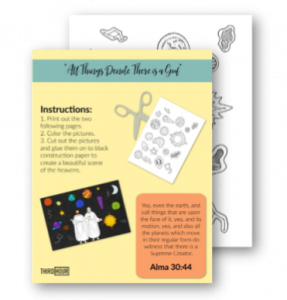 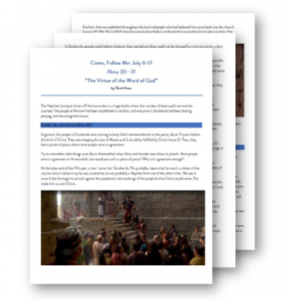 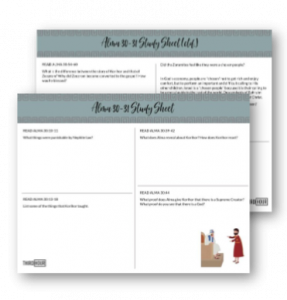 The Nephites have just driven off the Lamanites in a huge battle, where the number of dead could not even be counted. The people of Ammon had been established in Jershon, and everyone in Zarahemla had been fasting, praying, and mourning their losses.

In general, the people of Zarahemla were striving to keep God’s commandments at this point, about 75 years before the birth of Christ. They were keeping the Law of Moses until it should be fulfilled by Christ (verse 3). Thus, they had a period of peace where most people were in agreement.

Try to remember what things were like in Ammonihah when Alma and Amulek went there to preach. Most people were in agreement in Ammonihah, but would you call it a place of peace? Why isn’t agreement enough?

At the latter end of the 17th year, a man “came into” Zarahemla. This probably means that he wasn’t a citizen of the city but since it doesn’t say he was a Lamanite, he was probably a Nephite from one of the other cities. We see in verse 6 that he began to preach against the prophecies and teachings of the prophets that Christ would come. This made him an anti-Christ.

In Zarahemla, people could believe whatever they wanted and they could not be charged for criminal activity unless they actually broke the law. Look at verses 10 and 11. What behaviors were punishable by law?

Beginning in verse 13, we see that Korihor taught that prophecies were just foolish traditions and that it’s impossible to know that Christ will come. He taught that there could be no atonement (verse 17) and that we succeed in this life according to how smart, talented, and strong we are. He also taught that whatever we do is right. This is the same thing that the Lamanites believed before they were taught by Ammon and his brethren.

In American culture today, many people believe that the only sin is in the way we judge others—that whatever they do is right for them and we need to honor their choices. Is this the same as what Korihor taught?

Look at verse 18. In the Old Testament, the word “whoredoms” often means idol-worship, but also sexual sin. Remember when the early apostles like Paul and Peter were taking the gospel to areas outside of Israel, false prophets were rising up and teaching false doctrines. These sects also promoted sexual sin. Why, when they were half-a-world away?

Korihor tried to preach in Jershon among the people of Ammon, who were Lamanites. But the people immediately took him, bound him, and took him to Ammon, their high priest. Korihor was banished from among them, after which he tried to preach in the city of Gideon, where many had been baptized and come unto the church.

In verse 31, Korihor accuses Alma and the priests and teachers of getting rich by fooling the people. This is an accusation that anti-Christs make against the leaders of The Church of Jesus Christ of Latter-day Saints. Many of these people don’t realize that all of the temporary callings in the Church are volunteer positions.

Alma retorts by saying he has never earned anything for his service. In verse 36, Korihor says that they deceive the people. Alma then questions Korihor about his beliefs and then uses the spirit to read Korihor’s real intentions. Look at verse 42. Does Korihor actually believe in God? Why is he lying?

Korihor then asks for a sign. Why does Alma hesitate in giving Korihor a sign? (See verses 43 – 49.) How does Korihor change when he is struck dumb? Look at verse 53. The devil appeared to him in the form of an angel and said there is no God. Does that seem strange? How could there be an angel, then? What was pleasing about the devil’s teachings? What is the “carnal mind?”

After Korihor asked to be able to speak again, why wouldn’t Alma heal him? (See verse 55.) Korihor went from house to house begging. Is that the only thing a man can do if he can’t speak? Are there any crafts or work a mute person could engage in? Why didn’t Korihor try to work?

Korihor’s fate was published throughout the land and people who had believed him came back into the church (verses 57, 58). This is NOT what happened when Nehor confessed that everything he taught was false. The teachings of Nehor spread throughout many cities of the Nephites and Lamanites. Why?

Korihor died among the Zoramites. The Zoramites themselves had lost their faith. The reason they ignored Korihor was probably that they were so prideful and cared not for the poor or needy.

What does verse 60 say about Satan and how he treats those who follow him?

Alma goes to preach to the Zoramites (Alma 31):

In verse 1, we see that Alma received word that the Zoramites were perverting the ways of the Lord. It may have been that this news arrived with the news of Korihor’s death. Zoram was their leader and it was he who was encouraging idol worship. How are rulers able to encourage or discourage their people in how they worship?

In verse 2, we see that Alma “exceedingly sorrowful” at the loss of the Zoramites from the truth they once knew (verse 8). You may have these same sorts of feelings right now as loss is all around us. Many people are losing faith, there are unrest and chaos all over the world, and sin abounds and is widely accepted. Do you feel guilty because you are feeling this sorrow? Sometimes, Alma did feel guilty, because he had cause to rejoice over his own worthiness and success in his missionary work. But we need to realize that if we are trying to keep the commandments, we will feel sorrow for people who follow paths like the Zoramites did.

The Nephites were worried about the disbelief of the Zoramites for another reason (verse 4). What was it? What was the solution to this problem according to Alma (verse 5)?

When Alma went to preach to the Zoramites, he took, Ammon, Aaron, Omner, and then Amulek and Zeezrom were at the city of Melek at the time. He also took two of his sons, his younger sons, Shiblon and Corianton. He chose to leave Himni (a son of Mosiah) and Helaman (his oldest son) in Zarahemla. Why do you think he chose to leave them behind? (See verses 6 and 7.)

Verses 9 and 10 talk about the errors the Zoramites were making. Why is it important to do the things the Zoramites stopped doing? If we still believe in God, why do we need to keep the commandments? Many people today say they are “spiritual but not religious.” What’s the difference? Which takes more sacrifice and obedience?

In verse 11, we see that the Zoramites not only stopped keeping the commandments and ceased praying daily, but they “perverted the ways of the Lord.” Find the definition for “pervert.” What does it mean when we are talking about our doctrines, beliefs, and worship practices?

Verses 12 – 23 talk about how the Zoramites had changed their pattern of worship. Their attendance at church had turned into a fashion show and a display of their good taste in clothing and how much money they had to invest in silks and jewelry. Could this happen in your own ward? How?

Did the Zoramites feel like they were a chosen people? In God’s economy, people are “chosen” not to get rich and enjoy comfort, but to perform an important and difficult calling to His other children. Israel is a “chosen people” because it is their calling to be a moral guide to the rest of the world. Descendants of Ephraim are “chosen” to gather Israel prior to the Second Coming of Christ. How were the Zormamites “missing the mark” in feeling chosen?

When you attend church, what do you expect to gain? What do you expect to give? Did the Zoramites gain or give anything when they attended their synagogue? If it was your turn to speak from the Rameumptum, how would you have to prepare? How do you prepare to go to sacrament meeting? What’s the difference?

In verse 26, we see Alma losing patience, in a way. He was shocked at what the Zoramites had done with the truths they once knew and observed. Alma seems like he’s tired of living in this corrupt world. Many prophets have felt this way. Why?

In verse 27, Alma talks to His Father in Heaven about the pride of the Zoramites. What are some ways that people become puffed up in pride? When a person is prideful is he likely to humble himself before God? In verse 29, we see that the Zoramites were denying Christ. In verse 30, Alma pleads for an increase of patience and strength. He then prays for success among the Zoramites.

In verses 37 and 38, how did God bless them as they went out to preach?