What Shall I Do to Inherit Eternal Life?

It’s not that little children don’t throw tantrums. It’s not that they are never stubborn, or that they have no need to be disciplined. It’s that they keep returning, in love, even to a parent who is cold or frightening. They have not the ability to go their own way or think they know more. They are willing to submit. In verse 6, the word “offend” means “to cause to stumble.” We have a huge responsibility to nurture children in the way they should go. The Lord has shown us how serious it is to abdicate this responsibility or to create stumbling blocks for innocent children: “…it were better for him that a millstone were hanged about his neck, and that he were drowned in the depth of the sea.”

There is good counsel in Isaiah 29 that differentiates between murmuring discontent with the Church or the gospel and actually laying a snare to ruin the testimonies of others:

For the terrible one is brought to nought, and the scorner is consumed, and all that watch for iniquity are cut off: That make a man an offender for a word, and lay a snare for him that reproveth in the gate, and turn aside the just for a thing of nought (vs 20, 21).

They also that erred in spirit shall come to understanding, and they that murmured shall learn doctrine (v 24).

The Savior is willing to search out and find the lost of His sheep, even if He has 99 faithful and is just missing one. As He says, He is coming to save that which is lost (v 11), and although these sheep are adults, He sees them as “little ones.” When we envision leaving the 99, we wonder if they will be safe and we realize the Good Shepherd needs servants to help Him in His work. This article tells us how to be good sheep.

In this parable Christ has the Lord forgiving a huge debt, so huge it was literally impossible to repay, and the servant who owed it refusing to forgive a debt of pennies. The transgression is witnessed by others and reported to the Lord, who delivered the servant to the tormentors until the debt was paid.

This is a colorful way to portray how far in debt we are to the Lord. Our debt to Him is so great that it is beyond our ability to ever repay. How small then are the debts owed to us by others. By offering mercy and forgiveness we manifest to God that we are worthy of the same from Him.

The times Christ was born into are called times of “wickedness and vengeance.” Establishing the foundation of His Church in the midst of controversy and apostasy was not only dangerous, it meant winning and losing people continually. It was terrifically difficult to find dedicated servants who had a sure witness and would stay faithful. Christ called 70 to support the 12 apostles and sent them without supplies to preach in the cities of Israel. They relied on the charity of believers just as Alma relied on Amulek half-a-world away.

The history of the restoration hearkens back to these times. Among the Saints in Europe and America, there were many who would fall away as times got tough, and the environment during the apostasy in Kirtland was similar to apostasy at the time of Christ. When there is that much persecution and controversy, the people with staying power are really special.

As we look at the small size of the Church today and realize that about half the membership is faithful at any given time, we realize that even today the harvest is great but the laborers are few. Those of us who are willing to labor, however, have been given new tools with which we can bear testimony all across the world in a matter of seconds. How will we use them as the work hastens and Christ’s return is imminent?

This famous parable is an answer given by Christ to a lawyer who asked, “…who is my neighbor?”. To love our neighbors as ourselves is the second great commandment, but it’s surely easier to serve those we love or at least are like us.

Most people who know who Samaritans are don’t know why the Jews and Samaritans hated each other. When the northern kingdom of Israel was overcome by the Assyrians around 700 B.C., the Assyrians enacted a population transfer. They placed people from their empire in Israel to ensure loyalty in the region and carried away many of the Israelites who survived their onslaught. The offspring of the people of Israel then were “mixed race.” The Jews considered them mongrels who had become partly Gentile.

Before the Assyrian attack, the Israelite tribes in the northern kingdom had suffered under a series of wicked kings and had become wicked themselves. Hence, their fall and destruction. They had become idol worshippers, and their kings had established sites of worship in Samaria and Dan where they could worship the golden calf, the god who had delivered them from Egypt.

The Jews of the southern kingdom of Judea had later been overcome by the Babylonians (585 B.C.) and taken into captivity. When the Persians conquered Babylon, they enabled the Jews to return to the Holy Land and rebuild their temple. The Samaritans wanted to help, but they were rejected. After that, they did anything they could to keep the work from moving forward.

Before 300 B.C. Alexander the Great of Macedonia (Greece) conquered the known world, including Egypt and all the way over to India. The Holy Land groaned under the Grecanization of the region as Gentiles flooded in for war and for work. Alexander’s two generals split the territory when Alexander died young — one in Syria and one in Egypt. The Jews kept revolting, but the Samaritans were friendly to these forces.

The one successful Jewish revolt was around 160 B.C. led by the famous Maccabee family. They continued to rule but became corrupt. The Samaritans built a “temple” in Gerazim, and the Hasmoneans (as the Maccabees came to be known) destroyed it. So yes, poor relations all around.

The parable itself is one of Jesus’ best known and has many lessons to teach. it’s really worthwhile to read the article from John Welch about the possible symbols of the parable and then to discuss them. From the Jewish point of view, the Samaritan is interesting. Why was he going up to Jerusalem? To worship at the temple? To trade? He did seem to have some means, as he could afford to pay the innkeeper and had a “beast” for travel. He was indeed a special person we would probably all like to meet. Jerusalem was hostile territory for him, as it was for Jesus.

And what about the priest and Levite? The road down from Jerusalem to Jericho was dangerous because of robbers, and Jericho itself was not a place that would seem a logical destination. These two, if they had been engaged in temple service, would have completed it. Becoming unclean by helping this “half-dead” man would not have disqualified them for temple service, but still could have made them unclean for other duties. It’s about keeping the letter and not the spirit of the law. The Samaritan kept the spirit of the law.

Mary and Martha, the sisters of Lazarus, dwelled in Bethany about 1.5 miles east of Jerusalem on the south-eastern slope of the Mount of Olives. Thus, it’s easy to walk there from Jerusalem. Bethany itself is interesting. There may have been an almshouse there to care for the poor and a special place for the care of the sick. There may have been Galileans living there too, because they crossed the Jordan to travel south to Jerusalem to avoid Samaria, and may have stayed in Bethany.

The story of Mary and Martha is a favorite of women, because we all carry a portion of both — the need to serve and the need to grow spiritually — and these focuses often conflict. 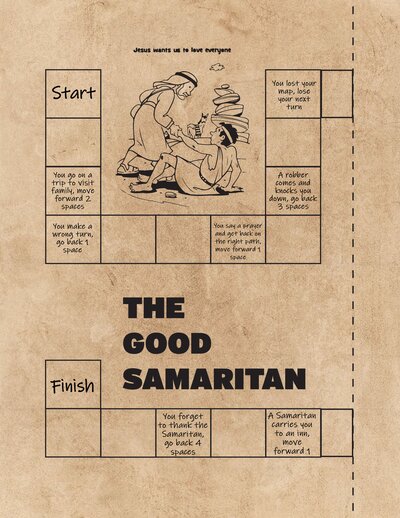 I Can Forgive Coloring Page 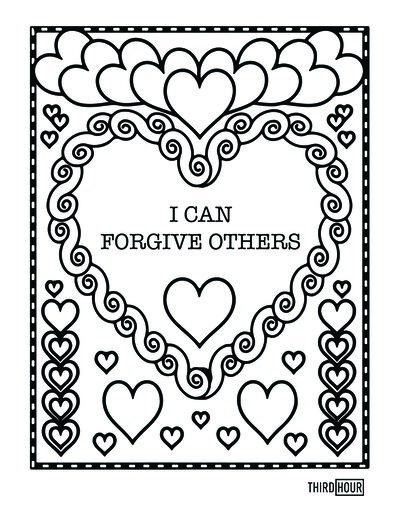 QUIZ: Get to Know the Quorums of the 70 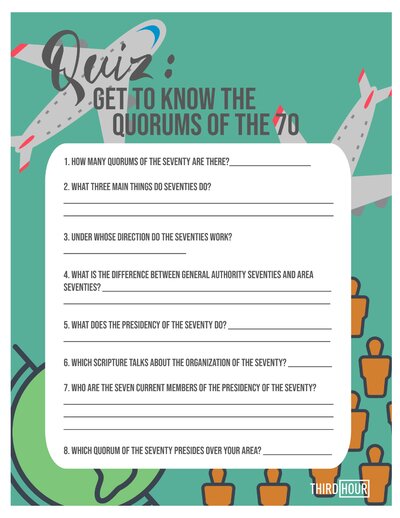