Our Easter celebrations are behind us, and we are now going backward in our study of the scriptures — back to the autumn before Christ’s crucifixion. We see Christ testifying of Himself bravely in Jerusalem while the Jews gathered for two important holidays: Sukkoth (the Feast of Tabernacles) and Hanukkah (the Feast of Lights). Sukkoth is a high holy pilgrimage holiday while Hanukkah is traditional but not commanded by God to celebrate or to make pilgrimage to the temple.

After these things Jesus walked in Galilee: for he would not walk in Jewry, because the Jews sought to kill him.

Jesus avoided Judea and especially Jerusalem because it was the seat of the Sanhedrin and the center of influence for both the Pharisees and the Sadducees. It was very dangerous for Him to go there.

The Feast of Tabernacles was at hand (John 7:2):

The Jews made 3 pilgrimages to the temple during the religious year to celebrate 7 high holy feasts ordained and commanded by God during the Exodus from Egypt. In the spring, there were 3 symbolic holy days within the 8-day pilgrimage — Passover, the Feast of Unleavened Bread, and the Honored Son first fruits offering. During the summer, there was one pilgrimage with one holy convocation, the Feast of Weeks.

Jesus’ “brethren” were not His apostles. They were family members and/or associates in Galilee. They wanted Jesus to put Himself out there and show His power in Judea. Jesus urged them to go and said He would not go, but He went alone in secret.

A huge polarization was occurring among the Jews. Some believed and some reviled. Note the palpable fear in these chapters of John, however. Jews who professed a belief in Christ were “cast out,” excommunicated. That the Jews sought Jesus may mean that they had spotted His brethren or that they expected His attendance because He was devout. Note that many who made the pilgrimage were from outside the Holy Land. The news of Christ’s miracles and teachings had surely spread, but they would be mostly rumor to pilgrims from other areas. 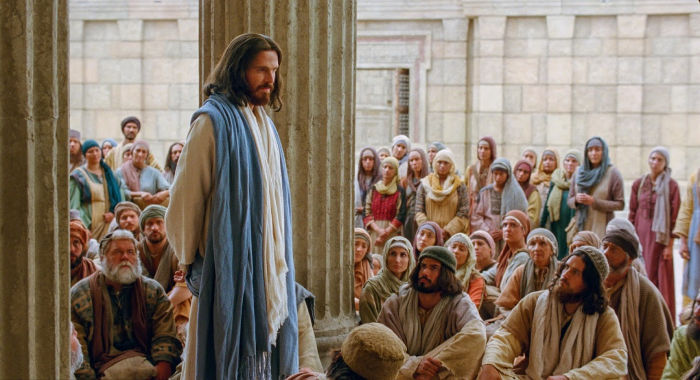 When Jesus taught, His wisdom and knowledge were readily apparent, but He was not a scholar and had never been taught. The people wondered at this. Christ told them that God can teach them if they seek Him. The people accused Him of breaking the Sabbath by healing on the Sabbath day. Jesus reasoned with them: if, according to the Law of Moses you can circumcise on the Sabbath, what’s wrong with making a person whole on the Sabbath?

It was apparent to the pilgrims that the Jewish leaders wanted to kill Jesus. Several times during the feast people or officers of the Sanhedrin tried to take Jesus, but they were not able because His time to offer Himself up had not come.

And many of the people believed on him, and said, When Christ cometh, will he do more miracles than these which this man hath done? (v 31).

Use the word “Messiah” instead of Christ in this verse. The Messiah the Jews expected was not (is not) anywhere near as powerful as Christ.

The chief priest was Caiaphas and he was a Sadducee, so both the Pharisees and Sadducees were interested in taking Christ and doing away with Him. They were even more desperate to do so when they heard the reasoning of the people that Christ was more powerful and wise than the Messiah they had been expecting.

Jesus told the wicked that they cannot go where He is going, and no one understood that He was speaking of His Heavenly Father’s kingdom, which is just for the righteous. They wondered whether he was talking about Galilee. Their thoughts were bound to the mundanities of this earthly life. They couldn’t think large enough to get the picture.

The symbolism of the fall holidays is as follows:

The final day of Sukkoth is called The Last Great Day. The Last Great Day exactly mirrors Passover in the Jewish Calendar and they divide the year in half (Christ came in the “meridian of time”). There was a formal water libation at the temple wherein there was a procession from the temple to the Pool of Siloam led by the high priest. The high priest would fetch water and carry it back to the temple altar, representing the water that sprung from the rock Moses struck with his staff in the wilderness. Three trumpet blasts were sounded and Isaiah 12:3 was recited: “Therefore with joy shall ye draw water out of the wells of salvation!” Christ inserted Himself into that ceremony. He stood before the high priests and the pilgrims and announced that He is the living water!

In the last day, that great day of the feast, Jesus stood and cried, saying, If any man thirst, let him come unto me, and drink (v 37).

After the first day of the Feast of Trumpets (which was a High Sabbath), and from that day on, pilgrims would ascend the steps to the temple with music and celebration. In the temple courtyard were 4 huge menorot (but these were 4-branched rather than 7-branched candlesticks) which were set alight as part of the festivities. After calling Himself the living water, and having gone up and returned from the Mount of Olives, and after the experience with the woman taken in adultery, Christ stood in front of these giant, fiery lamps and stated to the Pharisees,

I am the light of the world: he that followeth me shall not walk in darkness, but shall have the light of life (John 8:12)

The Pharisees and chief priests send officers to take Jesus:

This act caused a huge stir among the people. Some wanted to believe that Christ was the Messiah, but He was a Galilean and the Messiah was supposed to be from Bethlehem.

The officers reported to the chiefest among the Sanhedrin empty-handed. They couldn’t bring themselves to arrest Christ. Nicodemus happened to be there for this event (perhaps as one of Christ’s “brethren” from Galilee) and defended Christ: “Doth our law judge any man, before it hear him, and know what he doeth?” The priests proclaimed, “…out of Galilee ariseth no prophet.”

Jesus went to the Mount of Olives (to the east of the temple) and then went down onto the temple grounds. When the woman taken in adultery was brought to Him He looked downward and wrote on the ground twice. Some have speculated as to what He may have been writing. Look at this image… 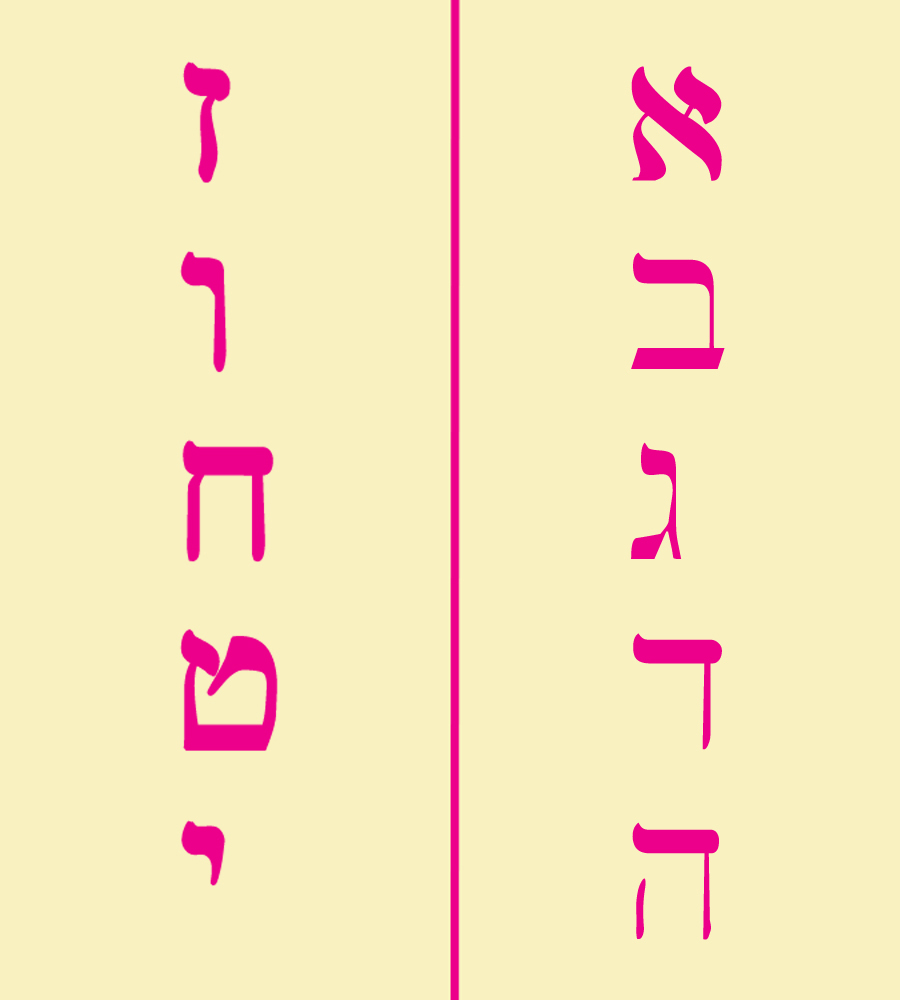 Hebrew has no numbers. Hebrew letters represent numbers and have numerical values alone or in combinations that make words. Any Jew seeing this list of Hebrew letters would know that they represent the 10 commandments and most would know what those commandments are. It’s possible that Christ wrote these letters in the sand or on the stones and the men reviewed their own behavior in relation to each commandment. One by one, their guilt caused them to depart. (From the top right reading downward — aleph (1); bet (2); gimmel (3); dalet (4); heh (5); and the left column top to bottom — vav (6); zayin (7); het (8); tet (9); yod (10).) [There’s actually an error in this image. The vav and zayin are switched.]

The Spirit witnessed to some who heard Him that He is the Son of God, but those without the Spirit were absolutely confused. Christ seemed to be speaking in riddles. They couldn’t open their minds and hearts enough to admit Christ as God’s Son and Messiah. Their tradition taught them that there is One God and that the Messiah would be a great king but not divine.

Jesus went farther to separate those with the Spirit from those without the Spirit when He began to talk about Abraham. It does us no good to be the seed of Abraham if we don’t follow Christ. Abraham was a prophet who rejoiced that Christ’s ministry and atonement would come. “Your father Abraham rejoiced to see my day: and he saw it, and was glad.” In this sentence, Christ showed His Divine Sonship by having seen Abraham and knowing that Abraham rejoiced in his visions of the future coming of Christ. This would only be possible if Christ were God, so this really confused the Jews who could not perceive by the Spirit.

The man who was blind from birth (John 9):

His parents answered them and said, We know that this is our son, and that he was born blind:

But by what means he now seeth, we know not; or who hath opened his eyes, we know not: he is of age; ask him: he shall speak for himself.

These words spake his parents, because they feared the Jews: for the Jews had agreed already, that if any man did confess that he was Christ, he should be put out of the synagogue.

That last phrase “he should be put out of the synagogue” means that if a man confessed that Jesus is the Christ, he would be excommunicated. The parents were too fearful to confess, but the son freely did so and was indeed excommunicated (vs 30 – 34).

The man answered and said unto them, Why herein is a marvellous thing, that ye know not from whence he is, and yet he hath opened mine eyes.

Now we know that God heareth not sinners: but if any man be a worshipper of God, and doeth his will, him he heareth.

Since the world began was it not heard that any man opened the eyes of one that was born blind.

If this man were not of God, he could do nothing.

They answered and said unto him, Thou wast altogether born in sins, and dost thou teach us? And they cast him out.

Jesus heard that they had cast him out; and when he had found him, he said unto him, Dost thou believe on the Son of God?

He answered and said, Who is he, Lord, that I might believe on him?

And Jesus said unto him, Thou hast both seen him, and it is he that talketh with thee.

And he said, Lord, I believe. And he worshipped him.

And now we have left behind the fall holidays. The scriptures don’t tell us whether Jesus sojourned in Judea or returned to Galilee and went up to Jerusalem again for Hanukkah. He may have spent the months (September – December) in Bethany with Mary, Martha, and Lazarus.

Hanukkah, the Festival of Lights or Feast of Dedication, celebrates the rededication of the temple after the Maccabees defeated a Greco-Syrian alliance under Antiochus around 160 B.C. The Greco-Syrians had murdered the Jews, forbid them to worship, and had desecrated the temple. When the Maccabees triumphed, they cleansed the temple and rededicated it. The oil for the sacred lamps (menorot) was depleted and there was only enough to keep the eternal light burning for 1 day, but the oil miraculously lasted for 8 days.

Jesus was walking on Solomon’s porch of the great temple of Herod. The Jews said He should just tell them outright if He was the Messiah (vs 25 – 27):

Jesus answered them, I told you, and ye believed not: the works that I do in my Father’s name, they bear witness of me.

But ye believe not, because ye are not of my sheep, as I said unto you.

My sheep hear my voice, and I know them, and they follow me:

The Jews tried to stone Him, but since it was not Jesus’ time, He left Jerusalem and went down into the Judean desert where John had been baptizing. He performed miracles and taught there (vs 41, 42 following):

And many resorted unto him, and said, John did no miracle: but all things that John spake of this man were true.

And many believed on him there.

Parable of the Good Shepherd Puppets 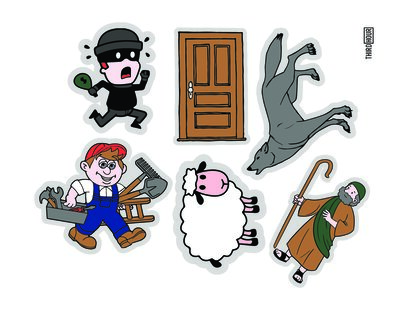 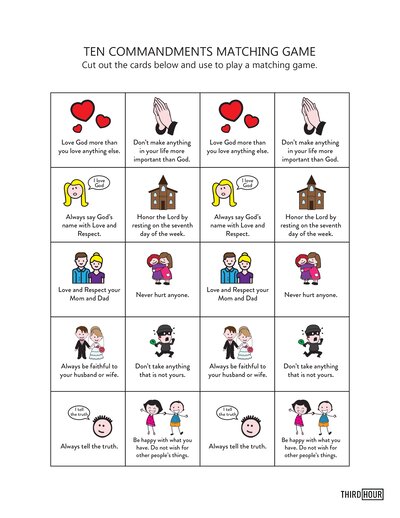