“The Power of God unto Salvation”

As we begin studying the epistles (letters) of the apostles to the congregations of the Church, notice that most were written by Paul and they are not in chronological order. Paul’s epistles to the Christians in Rome were written towards the end of his ministry.

There were already Christians in Rome when Paul arrived, and they were made up of both Jews and Gentiles. Emperor Claudius (one of Rome’s most level-headed rulers) had already forced Jews to leave Rome when they caused unrest, probably against Christians. After Claudius, Caligula (who was stark-raving mad) ruled for 4 years before he was assassinated. Then came Nero, who martyred Peter and Paul.

Romans were very concerned with peace and order. Christians were considered really odd because they 1) disregarded the class system and considered all people equal; 2) practiced their religion in private instead of in public; 3) had odd, scary rituals, like eating the body and drinking the blood of their God; 4) would not respect Roman religion and its festivals, and 5) followed a “man” who had been considered a criminal by Rome and who had been crucified by the government for insurrection.

Still, there wasn’t any sort of organized persecution of Christians until the Emporer Nero began such persecution in 64 A.D. It appears that the huge fire that burned much of central Rome may have led to this persecution. Nero was a man-child who broke all his toys. That’s a very dangerous thing when a person has that much power. Nero wanted to build a huge, lavish palace and citizens thought he set fire to Rome so he could claim that property.

Nero did react to the fire with admirable emergency efforts and aid to the displaced, but then he started construction on his palace. It appears he turned on the Christians and blamed them for the fire to deflect blame from himself. Nero executed Paul by beheading him (a merciful execution reserved for Roman citizens) and Peter by crucifixion (upside down, to honor Peter’s choice).

Until then, Paul was under house arrest in his own rented abode, able to receive visitors at will. He was able to write letters to various congregations of the church. We don’t know how many he actually wrote, or if all of the epistles identified as written by Paul were actually written by him.

Some Christian faiths teach that because of Christ’s atonement, His grace is sufficient to save us, requiring that we only have to confess Christ in order to be saved. Obedience is not necessary. The greatest commandment, however, is to love God with all our might, mind, and strength. Christ says, “If you love me, keep my commandments.” James’ epistle teaches us that faith is an action word. We show our faith by our works.

Christ’s grace enables us to live and breathe, to serve Him, and to keep His commandments. We rely on His grace daily. Although we have been accused of believing in a “works-based” gospel, we know we can never earn our way into heaven. The grace of Christ is indispensable for salvation and exaltation. This talk by Brad Wilcox can be the basis of a fruitful discussion on grace:

Those who call bad good and good bad call righteousness unrighteousness. The wrath of God is turned against those who do this. Paul says God allowed pagans to indulge in their perversions because of the darkness of their souls. Pagan religions are confused in what and whom they worship and fail to reap the blessings true faith could bring them.

Paul lists homosexual behavior as a symptom of a fallen society. In ancient Greece and Rome homosexual behavior was a way to satisfy lust without risking pregnancy. Homosexuality had a different cultural definition than we have today. There were no vocabulary words for same-sex attraction, and sexual practices were looked at as dominant vs passive rather than homo- or heterosexual. Christian morality, then, stood out as unusual.

This is another good discussion since Paul makes it sound like these are people who have sinned willfully, knowing that they were offending God. Was he talking about the pagan Romans or fallen Christians? Which of these sins are prevalent today in your culture?

Hypocrisy enters into this discussion. We judge others for the very sins we commit ourselves.

Those who know and understand God’s law are judged against it for their deeds. Paul is also talking about Jewish law. The Christians who were Jewish converts sometimes judged the Gentile Christians for ignoring Mosaic law. Although Paul had been a Pharisee, he was very much against holding Gentile Christians accountable according to Jewish law.

In Romans 3, Paul continues to condemn Jewish Christians who judge the righteousness of Gentile Christians by their ability to live Mosaic law. He again cites the sins of the unfaithful.

The Come Follow Me lesson talks about justification. It’s a principle that is easy to misunderstand and worth discussion. Evidently, the Jewish Christians were slow to understand that the Law of Moses cannot save us.

Paul continues to discuss this in Romans 4 by using Abraham as an example. The Jewish Christians really felt that the Gentile Christians should be circumcised, but the council of apostles at Jerusalem had decided circumcision was an unfair requirement for the Gentiles of the church. Paul explains that Abraham had faith unto salvation before he was circumcised and became the father to many nations, many containing millions of uncircumcised sons. And yet, he was justified by the atonement of Christ.

One verse, verse 4:15, says the following: “…for where no law is, there is no transgression.” This is the basis for our doctrine that there are people of many faiths and no faith who inherit a kingdom of heaven. We cannot be sent to hell if we never knew the laws of Christ. (See also Romans 5:13.)

The Fall and the Atonement (Romans 5):

Paul talks about how the fall of Adam brought sin into the world and how the atonement of Christ enables us, through repentance and faith, to be forgiven and justified.

Baptism makes us new people in Christ. The old, sinful self dies and comes forth a new person. These verses impress upon us also that baptism by immersion fulfills this imagery better than any other form of baptism. 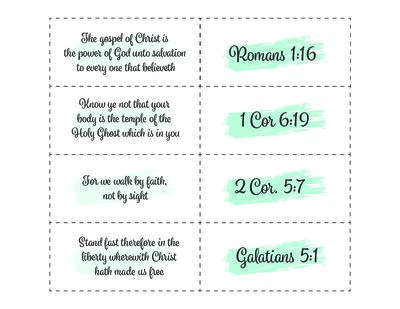