“He That Overcometh Shall Inherit All Things” 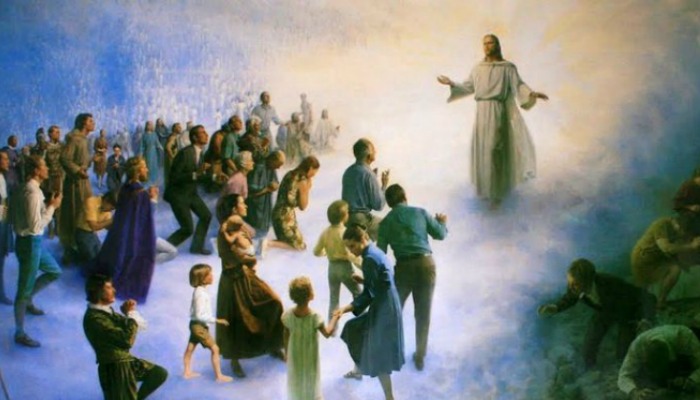 Here’s an article that can really help your understanding of the Book of Revelation.

The war against evil (Revelation 12):

The woman fleeing to the wilderness is the Church during the great apostasy. (See D&C 86:3.) It’s amazing how early in the history of Christ’s Church apostasy began to appear and then to realize how long it has lasted.

The dragon is Satan. We begin to see the pre-mortal war in heaven in verse 4:

“And his tail drew the third part of the stars of heaven, and did cast them to the earth…”

This refers to the third of pre-existent spirits who chose to follow Satan and who were cast out of heaven with him.

While other Christian faiths have these biblical scriptures and visualize a war in heaven between angels of light and the angels of Satan, they all omit the idea that we were there. Thus, the idea that we have all come from the presence of God is new to them when it is presented by our missionaries.

As far as Satan and his followers having been cast out of heaven to the earth, we hear very little about him in our modern world. Satan absolutely raged during the establishment of the ancient church and during the restoration under Joseph Smith. That has to be taken into account in any real history of the Church. Extreme circumstances and extreme behavior are absolutely understandable if you realize how Satan was raging.

He is now attacking from all sides, attempting to create a perfect storm for individuals, families, institutions, governments, and nations to crumble into chaos, virtues to become meaningless “values,” and licentiousness to become “freedom.” Sometimes, “chaos” is a better word than “evil” to describe the opposite of “good.”

In verses 11 and 12 we are told to rejoice because we are overcoming evil through the blood of the Lamb. For the righteous, it’s all good news.

Western minds have a bit of trouble with these sorts of symbols because our linear minds want to take them literally. We tend to be realistic in our thought. The Oriental mind is conditioned to peel back layers to reveal truth and is comfortable with highly symbolic material.

Section 77 of the Doctrine and Covenants is a collection of questions by Joseph Smith in which he received answers from the Savior. We wish he had asked more questions, but even these are helpful in understanding the Book of Revelation. There is a lot of speculation about the beast that is wounded unto death but healed that goes on to spread evil. It could be a person, a country, a movement. There are many ideas, but we may not really understand until this actually transpires.

Verse 8 talks about having our names “written in the book of life of the Lamb slain from the foundation of the world.” Rosh HaShanah, or the Feast of Trumpets, among the Jewish high holy days is the beginning of preparations for the final judgment. Its theme is “awake, arise, and gather for the righteous are being separated from the wicked.”

In Israel during Rosh HaShanah, people on the street stop saying “hello” and “good-bye” and instead wish each other “good signature”…”may your name be written in the Book of Life.” Those whose names are written are “doers of the word” (see the Book of James), those who keep the commandments of Christ. These overcome the world through the blood of the Lamb.

Verses 16 – 18 cause a lot of speculation among Bible-readers:

“And he causeth all, both small and great, rich and poor, free and bond, to receive a mark in their right hand, or in their foreheads:

“And that no man might buy or sell, save he that had the mark, or the name of the beast, or the number of his name.

“Here is wisdom. Let him that hath understanding count the number of the beast: for it is the number of a man; and his number is Six hundred threescore and six.”

Certainly, we are now at the stage where implanted chips in the back of the hand or retinal scanning of the eye would help us with rampant identity theft. People would be eager to have a way to be protected, so they can buy and sell without fear.

Hebrew doesn’t have numbers. Numbers are written using Hebrew letters, so that means that every word and name has a value. The ancient saints were certain that Nero, the emperor of Rome who killed Peter and Paul, was the anti-Christ. Although Nero died, they expected him to come back to life to persecute the righteous. His full name in Hebrew does total 666.

Another thing people look at is how the number 6 (V, or W in Hebrew) looks when it is written. It’s essentially a stick (l). So 666 would look like lll. A bar code, right? Or, since the 6 is a W, the beginning of a URL with the internet as all-powerful. These are speculative, of course. We have no idea whether these possibilities have value.

One pointed truth is that we are talking about commerce. People won’t be able to buy or sell without following the beast. Babylon, then, is not just used to represent evil because her citizens indulged in all sorts of sin and ignored the poor, but because she was focused completely on the world. The spiritual symbolism of the number 666 reflects this idea.

The number that represents perfection and wholeness for the Jews is 7. It is the week with the Sabbath. Six is the evil number. The number 666 has a spiritual lesson for us—it indicates never, ever becoming whole.

John Calvin read Revelation 14 and decided that only 144,000 people from all who have lived on this earth would be saved and all the rest would be condemned to hellfire. According to Calvin, these people were born chosen. There is nothing they can do to be un-chosen and nothing anyone else can do to become chosen. He also preached that mankind is totally depraved and that the atonement only works for these 144,000. His ideas are called TULIP philosophy because of these tenets:

How do our beliefs contrast with these? We are reading the same Bible. Why aren’t we coming to the same conclusions?

Joseph Smith asked the Lord about the 144,000 and received an answer, recorded in Section 77 of the Doctrine and Covenants:

“We are to understand that those who are sealed are high priests, ordained unto the holy order of God, to administer the everlasting gospel; for they are they who are ordained out of every nation, kindred, tongue, and people, by the angels to whom is given power over the nations of the earth, to bring as many as will come to the church of the Firstborn”  (D&C 77:11-12).

So these are missionaries endowed with power sent out at the end unto a very wicked earth in a last-ditch effort to gather in the righteous before the Second Coming.

In chapter 14 we see the fall of Babylon and the triumph of good, the Second Coming of the Savior.

The Saints are exalted and praise God (Revelation 15):

In verse 2 we see the celestialized earth which becomes a Urim and Thummim for the people who are exalted.

Note that the chapters of Revelation sometimes backtrack and don’t proceed in absolute chronological order. After we see the celestialized earth, which won’t happen until after the millennium, the seven angels need to be loosed to destroy the wicked (before the millennium).

Armageddon, earthquake, and the coming of Christ (Revelation 16): 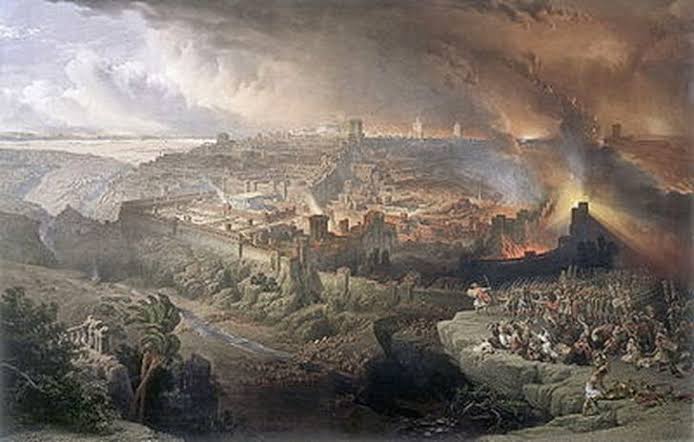 The Valley of Armageddon is in north-central Israel. The last great battle is foretold to occur there, with Jerusalem protected by two prophets foretold in a number of scriptures. Eventually, those two prophets are overcome, lie dead in the streets for 3 1/2 days and then are caught up to heaven. As the enemy pursues the Jews in Jerusalem, the Mount of Olives cleaves with part pulling north and part pulling south. The righteous are able to escape through the cleft which was caused by Christ setting foot on the mount.

This earthquake reverberates around the world changing the entire face of the earth. The Jews are given a witness that Jesus was and is the Messiah and events begin to transpire to usher in the millennium.

The wicked lament the fall of Babylon (Revelation 18):

Those who thrived in Babylon cry over her destruction. All commerce ceases, and the material goods that made life abundant are gone. The event strips us back to what is truly essential. Remember those interviews with people who have lost everything in a natural disaster. Their focus narrows in on God and family where it belongs in the first place.

The supper of the Lamb (Revelation 19):

Chapter 19 begins with the saints in heaven cheering as evil is overcome. The supper of the Lamb is the marriage supper talked about in the parables of the 10 Virgins (Matthew 25) and the lord preparing a wedding feast to which no one wants to come (Luke 14).

John tries to worship the angel who is showing him all these things, but the angel forbids him. The angel tells him to worship Christ and says, “…for the testimony of Jesus is the spirit of prophecy” (verse 10). John sees Christ on a white horse. Christ defeats the armies of the wicked.

Satan is bound during the millennium (Revelation 20):

The millennial rule of Christ over the earth will last 1,000 years, during which Satan will be bound. After the 1,000 years, he will be loosed for a little season before he is defeated by Michael and his armies and cast down to hell forever. The righteous who have died are resurrected and live and reign with Christ for the 1,000 years. The wicked are required to wait until the end of the millennium to be resurrected.

After Satan is finally defeated, the last of the people remaining are judged by the Lord. Those who have their names written in the Book of Life are exalted.

Verse 7 says “He that overcometh shall inherit all things; and I will be his God, and he shall be my son.” When evil is defeated and those who overcome become co-heirs with Christ, what is it that they shall inherit? Friends of other faiths are offended when we talk about becoming “gods,” but what else can this mean? On earth, we might inherit property or wealth, but those things are meaningless in heaven.

One of our doctrines is “eternal progression.” Eternity is a long, long time. There will be time enough to progress to become like God and partake of His glory and power, including the power to organize and create.

John sees the holy city of Jerusalem descending from heaven, shining like crystal. Verses 22 and 23 say, “And I saw no temple therein: for the Lord God Almighty and the Lamb are the temple of it. And the city had no need of the sun, neither of the moon, to shine in it: for the glory of God did lighten it, and the Lamb is the light thereof.” Verse 25 says there shall be no night.

The saints will reign in celestial splendor (Revelation 22):

John sees the tree of life within the holy city, continually bearing fruit. Christ’s name will be in the foreheads of all who are exalted.

Verses 18 and 19 are used by other Christians to claim that the scriptures are closed and can’t be added to: “For I testify unto every man that heareth the words of the prophecy of this book, If any man shall add unto these things, God shall add unto him the plagues that are written in this book: And if any man shall take away from the words of the book of this prophecy, God shall take away his part out of the book of life, and out of the holy city, and from the things which are written in this book.” 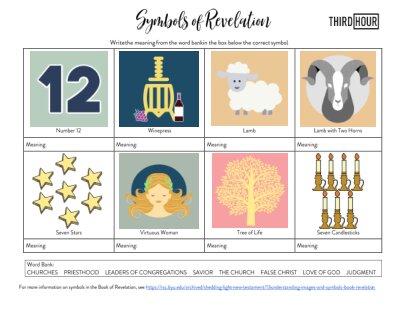