“Be Thou an Example of the Believers”

The epistles to Timothy, Titus, and Philemon are different from the epistles we have studied thus far in that they are letters of encouragement to other leaders in the Church rather than to congregations.

Timothy’s mother was Jewish and his father was Greek. He lived in Lystra in what is now central Turkey. Timothy was circumcised by Paul so that Jewish converts would be more attentive to him. Timothy was perhaps Paul’s most trusted and capable assistant.

Titus was one of Paul’s converts. He was with Paul at Jerusalem when circumcision was discussed. He is the person Paul sent twice to the Corinthians to deliver his epistles. It sounds like Titus didn’t spend much time with Paul after that, but was a leader in the Church in various locations, including Crete and Ephesus.

Philemon was also a convert but from Colosse (Colossians). He was the owner of the slave Onesimus, who ran away and joined Paul and was sent back by him with a letter to his master.

Paul lists the ways that a person might be enticed to teach false doctrine:

Praying for all people (1 Timothy 2):

Lately, President Ballard urged us to pray for our country and its leaders. That request goes along with the counsel of Paul: “[Pray] For kings, and for all that are in authority; that we may lead a quiet and peaceable life in all godliness and honesty.” Paul said we should pray for all men. Much has been said about the hollowness of sending “thoughts and prayers” after natural or manmade disasters. Is there any value in our thoughts and prayers? What if we gave up because we felt they had no purpose?

Paul’s counsel to women in verses 9 – 15 is not very popular in the western world today. Why? Does Paul’s counsel have any value? Was it Christian doctrine or cultural influence that caused Paul to write these counsels?

Discuss the characteristics noted by Paul that make a good religious leader. Do these hold true today?

Paul talks about apostasy in the Last Days. He says people will manifest the following characteristics (in 1 Timothy 4):

…and the following traits in 2 Timothy 3:

Paul talks at length about caring for the poor, which has been a requirement for the Church since the beginning. When societies have been ripe in iniquity unto destruction, abuse of the poor has been high on their list of transgressions. Paul talks about widows in this chapter, citing those young widows who become indigent and behave in unseemly ways. A good discussion here might be what the modern restored Church requires of those who receive church welfare.

Paul says in verse 9: “But they that will be rich fall into temptation and a snare, and into many foolish and hurtful lusts, which drown men in destruction and perdition.” What kinds of lusts can develop in a person who seeks for riches? A variety of these lusts can be viewed in the ads in luxury magazines. How can such a person be tempted away from the faith? Can a person who is poor be tempted in the same way? How do internet “influencers” fuel the love of money?

Paul said we should seek after the following instead: righteousness, godliness, faith, love, patience, meekness. How does seeking after these traits affect our relationship with material things?

God has not given us the spirit of fear, but of power and of love (2 Timothy 1):

Paul is talking about the fear of the world and those who are against the church. He encourages Timothy to be strong and faithful.

Paul likens vessels of these precious to coarse and common materials to the kinds of people we find everywhere, including within the church. We should associate with those who are righteous, humble, and patient. We as vessels need to seek to be sanctified.

Paul again predicts the apostasy and the status of men in the Last Days: “For the time will come when they will not endure sound doctrine; but after their own lusts shall they heap to themselves teachers, having itching ears; And they shall turn away their ears from the truth, and shall be turned unto fables” (vs 3, 4). How does this portend our own times?

Paul counsels husbands, wives, children, and servants to be temperate and modest in their behavior. “…we should live soberly, righteously, and godly, in this present world” (v 12).

God is no respecter of persons (Philemon):

Philemon’s servant, a believer, has sought Paul, fleeing from his master. Paul sends him back, pleading with Philemon to welcome him as a brother. Some people are bothered by the fact that neither Moses nor Christ tried to end slavery. Why didn’t they? There are very good reasons. Why would slavery gradually come to an end if we acted on true doctrine? 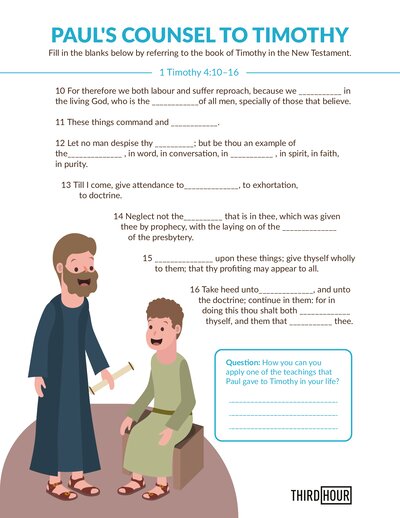