“A Minister and a Witness”

The presence of Paul had caused a riot at the temple (see the previous lesson) and the Roman guard had intervened. The captain, responding to Paul’s request, allowed Paul to address the crowd. It’s important to notice that Paul spoke in Hebrew, the language of the scriptures. At the time, most common Jewish citizens spoke Aramaic, the language of Assyria and Babylon. Many spoke Greek because it was the language of commerce and the marketplace. Some had learned basic Latin to interact with their Roman conquerors, but the scribes, Pharisees, and Sadducees would have been the ones who spoke Hebrew. Paul was singling them out.

Paul begins by emphasizing his Jewishness, that although born in Tarsus, he came of age in Jerusalem and was tutored by the respected Gamaliel. He had actively sought out Jesus’ followers to bring them to justice. Thus, he was zealous and stalwart as a Jew. He then recounts his miraculous conversion, which brings down the wrath of Jewish leaders upon him, and they yell: “Away with such a fellow from the earth: for it is not fit that he should live.”

The chief captain orders Paul to be scourged (whipped) in order to interrogate him. Paul interferes with their plans by stating his Roman citizenship. The chief captain had evidently purchased his status as a citizen, but Paul was born with his citizenship. The captain then loosed Paul and arranged for him to testify before the chief Jewish leaders.

The high priest Ananias ordered some among them to strike Paul. Paul called him a “whited wall” and denounced them as they broke the laws of Moses. Then, discerning that some of them were Sadducees, he declared himself a Pharisee, an upholder of the belief in the resurrection. Today’s Judaism comes down from Pharisaical Judaism. The Pharisees believed in the resurrection and in angels, while the Sadducees did not. The Pharisaical priests began to defend Paul’s claim that he had seen an angel, and the group devolved into shouting and shoving. The captain removed Paul from them to protect him.

That night, after the debacle with the Sanhedrin, Paul had a vision wherein the Lord revealed that Paul would bear witness of Him in Rome. Forty men then plotted that they would not eat a morsel of food until they had killed Paul. The plot was revealed to Paul and then to the chief captain, who decided to send Paul to the Roman governor Felix in Caesarea with a large Roman guard for security. Once Paul arrived in Caesarea, Felix agreed to hear him and incarcerated him in Herod’s judgment hall.

The high priests traveled to Caesarea to accuse Paul before Felix. They said Paul had committed heresy and disrupted their temple services, that he was a leader in the sect of the Nazarenes (the name they gave to Jesus’ followers because Jesus was from Nazareth).

Paul defended himself and said he entered the temple worthily and caused no unrest, that he believed in the law and the prophets. He then preached to Felix and his wife, who was herself Jewish. Felix was touched and wanted to hear more. He put Paul under house arrest and allowed him to have visitors. Paul remained in Caesarea for two years, when Felix expected a visit from Festus of Rome. Note that Felix had hoped Paul would offer him a bribe to purchase his release.

When Festus arrived from Rome, he spent only 3 days in Caesarea and then went up to Jerusalem. There, the chief priests begged to receive Paul in order to judge him. What they planned to do was murder him. Festus responded that Paul should remain in Caesarea and that he was about to go down to the harbor resort himself. He invited the Jewish leaders to Caesarea to testify. Once in Caesarea before Festus, they accused Paul of all sorts of things they could not prove. Festus wanted to win favor with the Jews and asked Paul if he were willing to go up to Jerusalem to defend himself. Knowing that would mean his death, Paul appealed to Caesar as a Roman citizen. 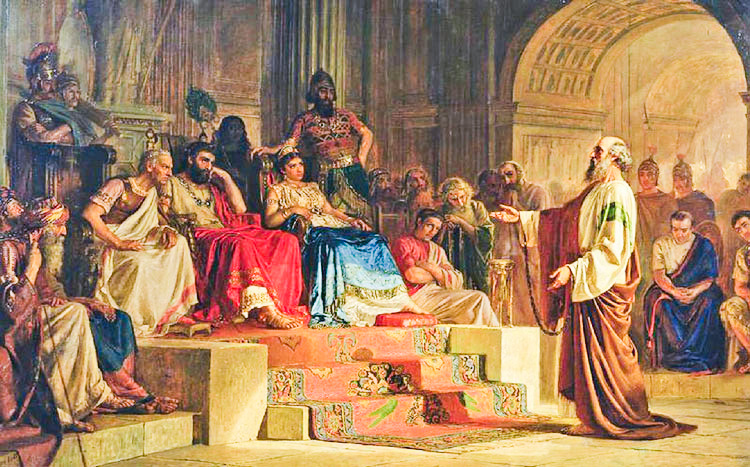 Paul treats Agrippa with utmost respect even though Paul and Agrippa I were childhood friends. Agrippa has Paul’s life in his hands. Even though Agrippa’s great-grandfather Herod the Great, who was the King of Judea when Christ was born, was a convert to Judaism from Esau, Agrippa’s mother and grandmother were Jewish. He was raised as a Jew. Paul appeals to Agrippa’s knowledge of Judaism. He speaks of the promises made to the Fathers of a messiah to come, and of the hope of a resurrection, as believed by the Pharisees.

Paul recounts how he punished Christians with zeal and then tells of his conversion. Festus interrupts him and says that too much learning has made Paul mad. Paul defends his sanity and then says of King Agrippa: “For the king knoweth of these things, before whom also I speak freely: for I am persuaded that none of these things are hidden from him; for this thing was not done in a corner. King Agrippa, believest thou the prophets? I know that thou believest.” Agrippa utters the famous words, “Almost thou persuadest me to be a Christian.”

Festus, Agrippa, and Berenice then discuss Paul in private. Agrippa supports Paul’s innocence and says that if Paul hadn’t appealed to Caesar, he would have set him free.

Paul’s adventures on the way to Rome (Acts 27):

Paul was put onto a ship with several other prisoners being sent to Rome under the watch of a centurion named Julius. They had intended to sail up the coast and west along the south coast of Turkey. They stopped in Sidon on the coast of what is now Lebanon, and then sailed west under Cyprus because they had encountered a headwind. They sailed mostly west from island to island, but it wasn’t smooth sailing, and encountering a ship sailing from Alexandria, Egypt, to Italy, they transferred Paul to the new ship.

They made it to Fair Havens on the south side of Crete, but the weather was still against them. Paul warned them that the ship, the cargo, and their own lives were in danger, but Julius believed the hopeful ideas of the captain more than he hearkened to Paul, and they continued on. For days they fought the winter winds and then Paul received a vision that the ship would be lost, but all on the ship would survive and belong to Paul. Paul shared his vision with the crew and passengers and told them (all 246 people) that they were in God’s hands. They followed Paul’s instructions for finding the safest landing. They ran the ship ashore, wrecking it, and everyone cast themselves into the sea and made it to shore.

Paul’s adventures in Melita and preaching in Rome (Acts 28):

The natives who lived on Melita, where they had shipwrecked, were hospitable to them. As Paul was making a fire on the shore, a viper bit him on the hand. The natives thought Paul must have deserved this ill fate in some way and thought he would die, but he received no harm from the usually deadly attack. This made the people think that Paul was a god.

The leader of the island was Publius, and his father lay sick with fever. Paul healed him and others who were sick or afflicted on the island. After wintering three months on the island, the group was able to sail on a ship from Alexandria that had wintered there. The people of Melita honored the group as they left and gifted them with the supplies they needed for the journey.

When they arrived in Rome, there were Christians to greet Paul and encourage him. While the other prisoners were taken by the guards, Paul was allowed to remain with the soldier in charge of him. Paul called an assembly of the chief Jews who remained in Rome in order to address them. Paul told them how he had been accused in Jerusalem. The Jews in Rome had heard nothing of it. These Jews had heard of the sect that followed Jesus, and they were curious.

Paul arranged to teach them at his lodging, a house he himself hired. He had been placed in house arrest and could receive visitors as he wanted. Some of the Jews did accept the gospel, but many turned away. Once again, Paul felt like it was time to turn his attention to the more receptive Gentiles. Paul remained at his house in Rome for two years, teaching and writing. He was never forbidden to do so. 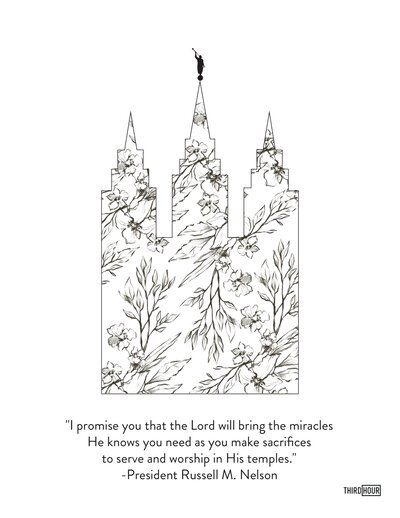 Mini-Book: Paul is Blessed on His Trip to Rome 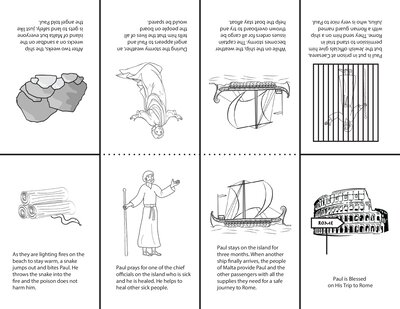 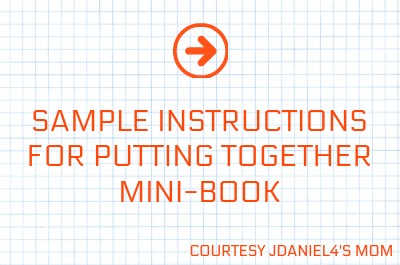