“What Wilt Thou Have Me to Do?”

Remember that Israel had been Grecenized (Hellenized) since Alexander the Great added it to his empire. Israel contained many towns and small cities that were entirely Greek. Converts were being made in these areas. Here we see Greek converts complaining that they were not being ministered to by their Hebrew leaders. There is more than meets the eye here. Because of their dietary restrictions, Jews normally avoided the company of Gentiles and would not enter their homes. That made ministering difficult. Another “problem” was that converts were being added to the Church daily, and there were simply too many disciples for leadership to personally attend to.

The apostles called seven devout men to help with the ministry—Stephen, Philip, Prochorus, Nicanor, Timon, Parmenas, and Nicolas, a convert from Antioch (in Syria). You could equate these men with our current presidency of the seventy. The apostles laid their hands upon the heads of these seventy to confer authority upon them, and they were able to heal and perform miracles.

Stephen was preaching in a synagogue, so, preaching to the Jews, and these Jews were from all around the Mediterranean: Libertines, and Cyrenians, and Alexandrians (Egypt), and of them of Cilicia and of Asia. This was not a peaceful discussion, but a contentious one. The men of the synagogue accused Stephen of blasphemy and began to seek for support from the people, the scribes, and the elders. They brought him to the Sanhedrin and found false witnesses. It seemed to the people then that Stephen’s face shone.

Stephen stood before the chief judges and recited the history of the Jews from Abraham through Moses. Probably, this did not cause offense until he got to the end of his recitation. He talked about the situation at Mt. Sinai, when Moses was up on the mountain for 40 days, during which the Israelites returned to idol worship. And then he said,

Ye stiffnecked and uncircumcised in heart and ears, ye do always resist the Holy Ghost: as your fathers did, so do ye.

Which of the prophets have not your fathers persecuted? and they have slain them which shewed before of the coming of the Just One; of whom ye have been now the betrayers and murderers:

Who have received the law by the disposition of angels, and have not kept it.

The chief judges were full of anger. But Stephen was full of the Holy Ghost. He saw the glory of God and Christ at the right hand of God. All who were offended came at Stephen with one accord and dragged him outside the city walls to stone him. Stoning was meant to be humane. The accused and judged person was pushed off a cliff or into a pit. The fall was meant to at least stun the person senseless before rocks were thrown down upon him to cause a speedy death.

We are introduced to Saul (later renamed Paul) Acts 7:58:

The verse says the following: “…and the witnesses laid down their clothes at a young man’s feet, whose name was Saul.” This symbolic ritual sealed the report of the witnesses, who according to Mosaic law, were required to cast the first stones at Stephen. We learn that Saul was young. But he was educated, a Pharisee, and zealous in keeping the law and executing it. Saul was not a native of Jerusalem but came from Tarsus on the southern coast of central Turkey (one of the largest trade centers on the Mediterranean coast).  Therefore, he was a Roman citizen. “Paul” was his Roman name and Saul (sha-ul) was his Hebrew name. His family were tent-makers but must have been quite successful.

There was a great persecution against the Church (Acts 8:1 – 4):

The disciples in Israel were scattered all through Judea and Samaria, but the apostles were in Jerusalem. The Jewish leadership mounted persecutions against them there, but Paul also traveled to seek out converts and bring them to Jerusalem for trial. He went from house to house to arrest them and put them in prison.

Phillip preached in Samaria and nearly the entire city converted, perhaps prepared by the village of the Woman at the Well. Phillip cast devils out of people and healed the lame and the palsied. There was great joy in Samaria. Simon, a sorcerer, who made his living by exercising his “power,” heard Phillip preach and was converted. When the apostles in Jerusalem heard that the city of Samaria was converted, they sent Peter and John to confer the Holy Ghost upon the new converts. When Simon saw the power of the apostles, he coveted it and tried to purchase it with money. He showed humility when the apostles chastized him for his improper spirit. This could be the subject of a fruitful discussion, including the possibility of misunderstanding the administration of the power of Christ, and humility in the face of chastisement.

After Phillip returned to Jerusalem, an angel summoned him down to the southwest coast of Israel to Gaza. He met an Ethiopian eunuch who had been up to Jerusalem to worship and was returning home. He was a man of high station who served in the court of Candace, the queen of the Ethiopians. Eunuchs were not allowed to access certain locations in the temple or to be a full part of the congregation of Israel, because they were mutilated men. And this eunuch was also Black. When Phillip encountered him, he was reading Isaiah but needed help understanding. He requested baptism and Phillip agreed. After the baptism, the Spirit carried Phillip away. He then preached in Caesarea, a beautiful Roman seaport and resort on the Mediterranean coast of Israel. 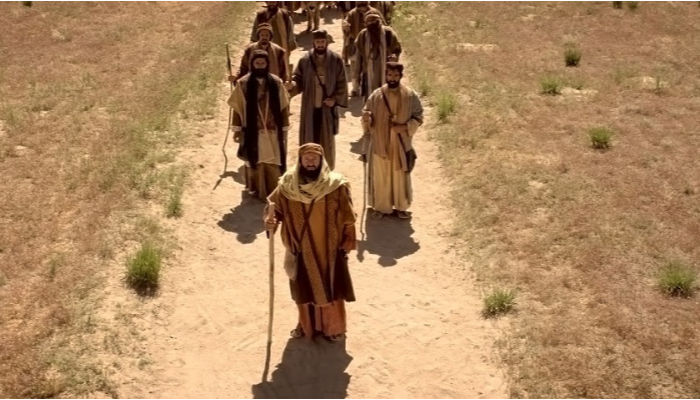 Saul petitioned the Sanhedrin to go to Damascus in Syria to seek out Christians and arrest them. On the road to Damascus, Saul’s well-known conversion ensued. He was struck blind by the light he experienced as he approached Damascus. Those with him heard a voice but did not see the vision wherein Christ demanded to know why Saul persecuted Him and “kicked against the pricks.” A prick is a prod used for animals. When they kick against it, it pricks all the more.

Notice that Saul immediately submits and asks what he should do. Unless we are willing to do what our new knowledge requires, we are not truly converted. The Lord told Saul to go to Damascus. His companions led him there, as he was without sight, food, and drink for three days. Ananias had received a revelation telling him where to find Saul and heal him. Ananias hesitated, reciting to the Lord Saul’s many crimes against the Saints. But the Lord said, “Go thy way: for he is a chosen vessel unto me, to bear my name before the Gentiles, and kings, and the children of Israel: For I will shew him how great things he must suffer for my name’s sake.” With this assurance, Ananias obeyed.

As soon as he was healed, Saul went about the Lord’s work, gathering with the disciples in Damascus, preaching in the synagogues. People were amazed. They knew how ruthless he had been in capturing, imprisoning, and murdering the Saints. It didn’t take long for Jewish leaders to want Saul dead, and Saul had to be lowered over the walls in a basket by night.

Saul traveled to Jerusalem and met with the apostles. It wasn’t easy, but he did convince them of his true conversion.

Joppa (Jaffa, Yaffo) is a port city near Tel Aviv. In Lydda and Joppa Peter manifested the power of Christ in healing Aeneas, who was sick of the palsy, and then raising Tabitha from the dead. Then Peter spent some time at the home of Simon the Tanner. Soon he would receive an important revelation that would lead to the preaching of the gospel throughout the world.

QUIZ: Women of the New Testament 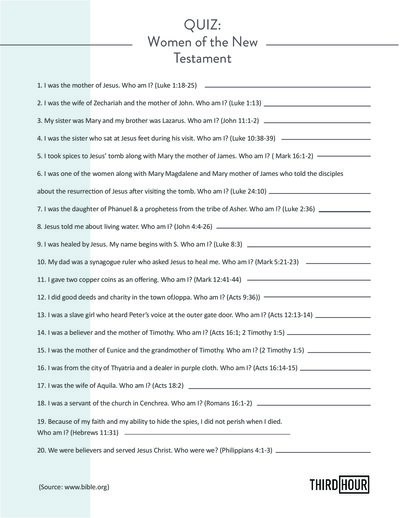