Passover season was a crazy, busy time in Jerusalem. Tens of thousands of pilgrims (even a million, some say) arrived in the area for the most important holy festival of the year.

This year, rumors of the miracles of Jesus had caused a sensation, and everyone wanted to see Him preach and heal. Then, suddenly, He was crucified. Even though Christ had warned His apostles that He was going to die, the sudden unfolding of Christ’s unthinkable execution took them all by surprise. With crucifixion being the most humiliating death possible, people’s sensibilities were stunned.

The Sanhedrin never did remain satisfied just with the death of Christ. They were after His followers, too. So this was a very dangerous, confusing time. Imagine also the family and community responsibilities of Christ’s followers. Imagine your own calendar during Christmas season, full of obligations and traditions, and suddenly this happens. Your Savior has been killed and you have to go into hiding.

People were also focusing on the symbolism of the holidays, trying to make sense of Jesus as the possible Messiah. Christ taught over and over that the Passover symbols referred to Him. And the autumn before, He had testified the same thing of the fall holidays with the water libation and the lights on the temple mount — He said He was the light of the world and the living water. Now He was the Paschal lamb, sacrificed for the sins of the world.

No one had ever risen from the dead. Although Christ had taught His apostles, they had nothing in their past experience to inform them during this time of loss and upheaval. We don’t see a single person in the Bible who was calm and assured of Christ’s coming resurrection. Note that there is very little in the Old Testament about the nature of resurrection. People then did not have the knowledge we have now.

Christ rose as the first fruits wave offering was made in the temple. The “offering of the honored son” guaranteed a perfect harvest for the coming year. Christ was the firstfruits of the resurrection, again fulfilling the symbolism of the feast days.

Adding to the difficulties His followers faced during Christ’s three days in the tomb, many activities were forbidden over the Sabbath and especially over the Passover Sabbath. His apostles and followers were unable to perform the usual anointings and preparations for the dead. They did what they could and hoped to do better once the Sabbath was over. Even the fact that Joseph of Arimathea’s tomb was close enough to walk to helped His followers not to break Mosaic law. 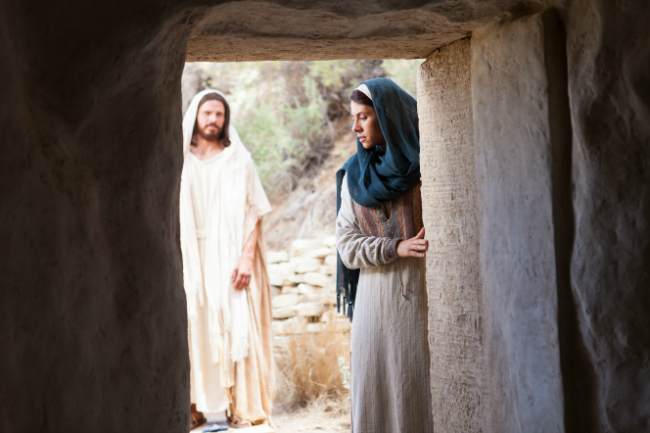 It’s hard to imagine a more comforting and loving way to announce to Christ’s followers that He lives! According to Matthew, Mary (the mother of James and Joses) and Mary of Magdala were approaching the sepulcher. (The name ‘Mary’ in Hebrew is Miryam.) An angel had rolled away the stone, placed there by the Sanhedrin and Romans to keep His followers from taking His body. The guards were stricken. The angel told the women Christ had risen, showed them the empty tomb, bid them to tell the apostles, and informed them that Christ would come to them in Galilee, far from the dangers of Jerusalem. The scripture says they ran to find the disciples “in fear and great joy.”

Luke adds Joanna “and other women” to the women who went to the tomb. Luke also adds that Peter ran to the tomb and found it empty.

John has Mary Magdalene alone going to the tomb and finding it empty. Her report brought Peter and John running to see, assuming that the body had been stolen by their enemies. They witnessed the empty tomb and the burial clothes abandoned there and then they returned to their Jerusalem abode.

According to John, Mary stayed at the tomb weeping and then Christ, not yet resurrected, appeared to her.

Matthew says that Jesus met the women, that they held Him by the feet. He told them to have the apostles go to Galilee, where He would meet them. John’s account has the apostles in Galilee much later than this.

Some of the men guarding the tomb reported to the chief priests. The chief priests gave them a large sum of money to spread the lie that Jesus’ followers had taken His body away.

Evidently, a mountain in the region had been chosen as a gathering place. Christ told His apostles to teach in all the world and assured them that “All power is given unto me in heaven and in earth.” Matthew’s is the only account that makes it sound like the apostles immediately went to Galilee. All the other accounts have them remaining in Jerusalem until after Shavuoth, the Feast of Weeks.

Mark’s account has Christ first appearing to Mary as a spirit before His resurrection. John’s account has Mary staying behind after Peter and John left the empty tomb to witness to the other apostles. Then she sees the not-yet-resurrected Christ.

We have this story in only two verses in Mark. The disciples who saw Christ reported to the apostles, but the apostles wouldn’t believe them.

Luke spends much more time on the story of the two disciples who met Christ on the road to Emmaus, which was about 7 1/2 miles from Jerusalem. One of the two was incredulous that this stranger had not heard the news about Jesus and His crucifixion. It was the biggest news of the time. His disappointment in the turn of events shows in this statement: “But we trusted that it had been he which should have redeemed Israel…”

The two explained that the women had borne witness of the empty tomb and angelic visitors. Christ chided them for their unbelief then recited Old Testament prophecies and witnesses of Him. The two convinced Christ to share a meal with them in the evening and during the meal, He revealed Himself. The two men returned to Jerusalem to find the apostles, to whom they testified.

Jesus appeared to the apostles and proved that He was resurrected by eating food with them and having them feel the wounds in His hands and feet.

Christ chastised the apostles for not believing the witnesses He sent — Mary and Mary and the two disciples on the road to Emmaus. A good discussion here. Why didn’t they believe when Christ had prepared them for these events? Did they not understand what Christ was saying to them? Is it because the events were without precedent? Were the witnesses not “important enough” in their eyes? Luke 24 says the report of the women seemed as “idle tales.” Women were not accepted as witnesses in court, because they were easily persuaded by men and thus not reliable. Is that what was happening here?

Luke shows Christ expounding the scriptures to the apostles to show how they witnessed of Him and show that He would die and become the firstfruits of the resurrection. While other scriptures pull our focus to Galilee as a location for Christ to teach the apostles, Luke keeps us firmly in Jerusalem, only moving the apostles to nearby Bethany for respite, until they are imbued with power. Pentecost, with its great manifestations of the spirit and gift of tongues, was 50 days after Passover and another pilgrimage festival centered on the temple. During these weeks, Luke has the apostles constantly at the temple in Jerusalem.

In the account of John, we see the apostles hiding in fear because of their dangerous circumstances and Christ appearing to 10 apostles. We learn more about Thomas, who refused to believe until he saw the resurrected Christ. He wasn’t present when Christ first appeared to the ten. Christ appeared to all 11, including Thomas, 8 days later. In John’s account, Christ breathed on the apostles and gave them the Holy Ghost then and not at Pentecost.

Christ recited spiritual gifts that follow faith in Him, yet many churches do not believe in spiritual gifts. You might want to discuss these spiritual gifts as manifest in The Church of Jesus Christ of Latter-day Saints, where His authority abides.

Christ was taken up and the apostles began to preach and manifest the power which they had.

By John 21, the apostles had relocated to Galilee. It sounds like not all the apostles were together when Peter decided to go fishing with some others deciding to go with him. They fished all night but caught nothing. In the morning they saw a man on the shore. The man bid them cast their nets on the right side of the ship. This counsel is almost ridiculous — it’s only a few feet from the left side of the ship. But doing this, the apostles caught a multitude of fishes, too many to draw up with their nets. They then knew the man was the Savior.

Peter cast himself into the sea and swam, while the others tried to haul in the fish and get to shore, which wasn’t far away. Jesus had made a fire on shore and had grilled fish and prepared bread. Jesus told Peter to bring in the fish, which numbered 153 but still didn’t break the net. Jesus served them food, and John says this was His third appearance to the apostles. John goes to great lengths not to use the words “I” and “me.” He shows Jesus urging Peter to feed His sheep and then discloses that he, John, would be translated and continue to minister until the Second Coming.

Christ, when He speaks to Peter, says “lovest me more than these?” — referring to the abundance of fish. Here is another good discussion. What do the fish represent? Worldly profit? A simple, rewarding, ample lifestyle? What else? 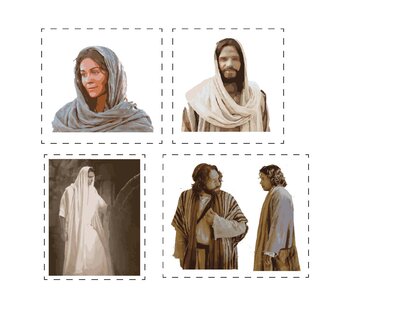