Modern scholars do not know who authored the Book of Hebrews. Even scholars in the first few hundred years A.D. questioned its authorship. It is considered a masterpiece of ancient Greek writing and is more polished than Paul’s use of Greek. Scholars believe it was written for Jewish converts in Jerusalem. Jewish converts were tempted to turn back to Judaism because of the persecution they received as Christians in the Holy Land.

Christ is above the angels (Hebrews 1):

At the beginning of Hebrews, we receive some assurance about the nature of Christ:

Jesus came to suffer and to save us (Hebrews 2):

Since we have received so many testimonies that Christ is the Savior of the World, including the witness of the Spirit, miracles, signs, and wonders, why should we then be weak in the faith and tempted to abandon it? Christ offers to make us coheirs with Him:

For both he that sanctifieth and they who are sanctified are all of one: for which cause he is not ashamed to call them brethren (v 11).

Hebrews 2 calls Christ the “merciful high priest” who is able to succor us because He understands us and that because of His suffering.

Now is the time and day of our salvation (Hebrew 3):

In Hebrew 3, the author compares Christ to Moses. Because of the Jews’ admiration of Moses, the comparison worked for them.

For this man was counted worthy of more glory than Moses, inasmuch as he who hath builded the house hath more honour than the house (v 3).

The writer brings up the provocation in the day of temptation in the wilderness. Note that the Jews looked to the Exodus from Egypt as the example of God’s salvation. At Passover, the holiday dedicated to deliverance, the story of the Exodus is recounted. In fact, it is recounted to anyone who seems to be losing faith—even today. You can see an example in the Book of Mormon.

In 1 Nephi 17, Laman and Lemuel refuse to help Nephi to build a ship. Nephi launches into the Exodus story in order to encourage his brother that God is a God of miracles.

The provocation in the wilderness is when the Israelites murmured and rebelled, when they built and worshipped the golden calf. The generation of Israelites that came out of Egypt was forced to wander in the wilderness for 40 years until they all died off. Then the younger generations were allowed to inherit the promised land. The writer counsels the Hebrews not to disqualify themselves from eternal life.

The gospel was offered to ancient Israel (Hebrews 4):

The Christian converts were offered the opportunity to enter into God’s rest, which is the receiving of one’s calling and election. Were they going to turn their backs on that offer, once presented to them anciently on Mount Sinai?

A person who receives his calling and election must rest from the things of the world and essentially experience a continuous sabbath.

A high priest is taken from among men and anointed so that he can make offerings for their sins and also for his own sins. Such a man must be called of God as was Aaron. Christ didn’t glorify Himself but was glorified and chosen by the Father. Verse 6 says that Christ is a high priest forever after the order of Melchizedek.

It’s interesting that we are the only Christian faith that knows much about Melchizedek. What do we know and where is that knowledge found? Why do we call the high priesthood by his name?

Christ learned obedience by the things that He suffered and learned so fast and so well that He was sinless. “And being made perfect, he became the author of eternal salvation unto all them that obey him…” (v 9).

The last few verses of Hebrews 5 are a condemnation. The Jewish converts should be teachers of the gospel and yet they must be given milk because they are not ready for meat. Several of the Brethren in our day have told us that we are “living below our privileges” in the gospel. What does it mean that the Lord is ready to give us meat but we’re not ready to receive it and even might reject it?

Going on to perfection (Hebrews 6):

Missionaries often encounter investigators who believe in the message and are touched by the Spirit but who don’t want to make the lifestyle changes necessary to embrace the restored gospel. They don’t want to alienate their families or face the possibility of losing their jobs. They are hugging the foundations in their lives when they could have a temple.

What keeps us from fully engaging with that which will bring us our calling and election? Note the subtle difference between this and the question at the end of the commentary for Hebrews 5.

The writer then talks about those who become Sons of Perdition:

For it is impossible for those who were once enlightened, and have tasted of the heavenly gift, and were made partakers of the Holy Ghost (v 4).

If they shall fall away, to renew them again unto repentance; seeing they crucify to themselves the Son of God afresh, and put him to an open shame (v 6).

In the two verses above, the writer is talking about those who have had the heavens opened to them and have seen the Christ. Therefore, their faith has become knowledge. If they fall away and deny the Christ it’s as if they are crucifying Him anew. The Brother of Jared would be in this category, as his faith in Christ was replaced by knowledge. If he had denied the Christ, he would have become a Son of Perdition.

Highlights from the Book of Hebrews: Especially for Kids 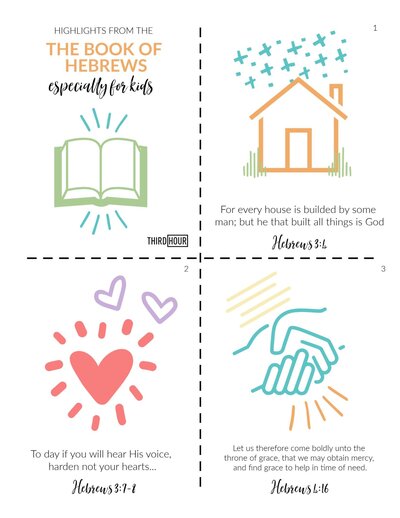