“God Is Not the Author of Confusion, but of Peace”

Is the opposite of good, evil? Or is it chaos? God’s house is a house of order and peace, and confusion and contention are signs of Satan’s influence. Doctrine and Covenants, Section 45, Verse 26 says, “…the whole earth shall be in commotion, and men’s hearts shall fail them….” We are witnesses that this prophecy is coming true, as we see commotion everywhere, among men and in nature, and even in churches and religions of the world.

Confusion was entering into the church in Corinth and Paul was trying to encourage peace and agreement among the saints there. In the Book of Mormon Alma talks about “seeing eye to eye.” We immediately think about getting along with one another when we hear this phrase. Associating it with Zion, we picture the Saints in agreement in every way. But Alma teaches us how this can be achieved.

In Alma 36:26 Alma says, “For because of the word which he has imparted unto me, behold, many have been born of God, and have tasted as I have tasted, and have seen eye to eye as I have seen; therefore they do know of these things of which I have spoken, as I do know; and the knowledge which I have is of God.”

Alma saw eye to eye with God Himself and received his knowledge from God and not from the world.

In Mosiah 16:1, it says, “And now, it came to pass that after Abinadi had spoken these words he stretched forth his hand and said: The time shall come when all shall see the salvation of the Lord; when every nation, kindred, tongue, and people shall see eye to eye and shall confess before God that his judgments are just.” People will see eye to eye with God, obtain their knowledge from Him, and then there will be perfect order and peace. Confusion and contention will disappear.

The gift of prophecy includes the testimony that Jesus is the Christ. Paul echoes Moses who said that we all should be prophets.

To the Jews, perfection (spiritual wholeness) meant to have the 7 holy attributes of God:

How does this definition of perfection differ from your own perception of what it means to be perfect? How can you focus on these attributes in your life? How do temple worship and covenant-making help you attain the attributes of God?

Women in the church. The lesson manual talks about women speaking before the congregation. Women had a huge role in establishing Christianity. The Prophet Joseph Smith changed a few words in these passages that make them more favorable to the role of women. Note that in Judaism, women did not participate in reading scripture before the congregation in the synagogue and sat separately from men, often observing from a mezzanine above and behind the men.

Late scholar John Tvedtness said, “That baptism for the dead was indeed practiced in some orthodox Christian circles is indicated by the decisions of two late fourth century councils. The fourth canon of the Synod of Hippo, held in 393, declares, “The Eucharist shall not be given to dead bodies, nor baptism conferred upon them.” The ruling was confirmed, Tvedtnes says, four years later in the sixth canon of the Third Council of Carthage.”

Note that the practice was ended when people tried to baptize dead bodies, and records exist of that sort of thing where a person who was to be baptized died just before the ordinance was to take place. There’s a difference between baptism of the dead and baptism for the dead. Baptism for the dead was practiced by some sects of Christianity that were later deemed heretical. This is what we know from the few records that still exist. Paul speaks as if baptism for the dead was a common and well-known practice.

Verses 40 – 42: The kingdoms of heaven. The rest of Christianity has no knowledge about what these verses mean. Section 76 of Doctrine and Covenants (along with Section 138, the vision of the spirit world) teach us more about heaven than the cumulative knowledge of the rest of Christianity. These two revelations alone comprise a gift that is valuable beyond measure.

Be steadfast and charitable (1 Corinthians 16):

Paul begins by explaining how to gather donations to be sent to Jerusalem. He wants members of the church to gather in donations on Sundays and have them ready when he arrives. He doesn’t want donations to be gathered while he is visiting in Corinth. Paul is planning to stay awhile in Corinth and then spend some time in Ephesus (on the west coast of Turkey) before he travels to Jerusalem. He speaks of an “effectual door,” as the Lord guides him to Jerusalem to be accused at the Feast of Pentecost and then to be sent to Rome.

(1 Corinthians was written by Paul while he was in Philippi in Greece.)

Baptism for the Dead Word Search 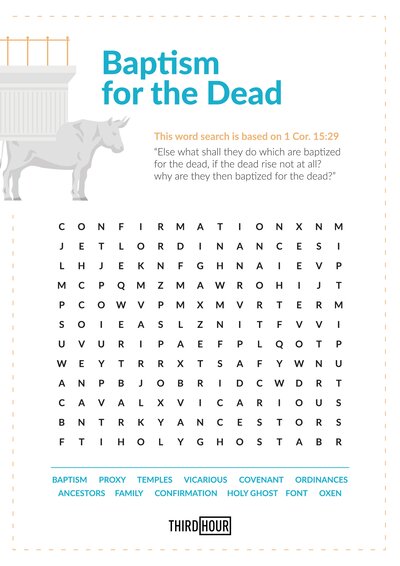