“Walk in the Spirit”

The Book of Galatians is an epistle written by the apostle Paul to congregations in Galatia. Scholars are not sure if the ancient Galatia Paul was focused on (which was part of the Roman Empire at the time) was in central or southern Anatolia. Anatolia comprised most of what is now modern-day Turkey. This map shows Galatia in central Anatolia: 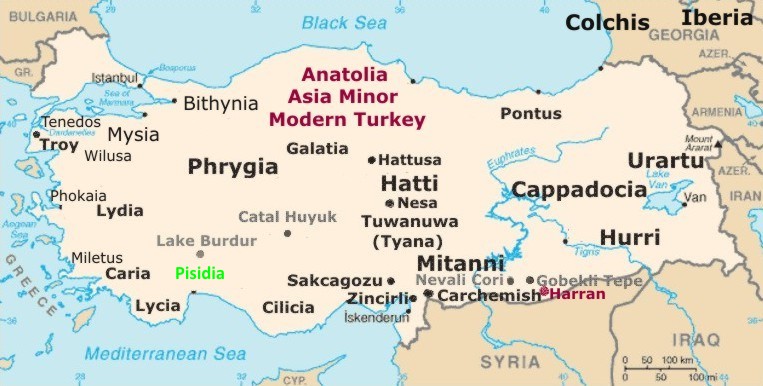 Scholars disagree as to when Paul may have written this epistle. They also disagree on the composition of the congregations—whether the members were mostly Jewish converts or Gentile converts.

Two looming problems we saw in Paul’s letters to the Corinthians show up again in his counsel to the Galatian members:

Paul was a really zealous Pharisee before his miraculous conversion on the road to Damascus. But as an apostle of Jesus Christ, he was a champion of the Gentile converts. Paul talks a lot about how the gospel makes us free. This in relation to how the world can bind us in chains. But he also views having to abide by the traditions of the Law of Moses as a sort of unnecessary bondage for all early Christians.

Even now, we as Latter-day Saints sometimes impose a sort of bondage on each other by emphasizing the conformity to traditions that are not central to the message of the gospel. We can also put ourselves in bondage if we misunderstand the gospel, the atonement, or the way God deals with His children. This could make a very interesting discussion.

Paul curses those who preach false gospels or pervert the true gospel in any way. He briefly recounts the fact that his own conversion was through divine intervention and direct revelation, so the gospel he has received is pure and undefiled.

Today, using the Bible as their highest authority, there are over 45,000 unique Christian denominations, all with varying doctrines. God’s only true church would have to receive its doctrine via direct revelation from God.

A good exercise would be to list some doctrines and policies of the Church today. Policies change according to revelation to best serve the Saints in their current situations. Doctrine is eternal but only fully known to God. Our understanding of true doctrine can increase as we are worthy to receive more knowledge and to act upon it.

Paul stands up for the Gentiles (Galatians 2):

When Paul went to Jerusalem, he gave an account of his ministry to the apostles there. They made the decision not to require circumcision when Gentiles joined the church, but this was a cultural struggle that lasted for years and unsettled the leaders as much as the congregations.

Paul’s companions, such as Titus, were Greek. When Paul brought them with him to Jerusalem, they were not whole-heartedly accepted, and when they entered the temple grounds, it caused a problem with the general population of Jerusalem Jews.

Do we in the modern church have any issues such as these?

Who are the children of Abraham? (Galatians 3):

During Christ’s ministry, He railed against the Jews who were arrogant because of their descendancy from Abraham. He chastised them saying that God could raise up from the cobblestones descendants of Abraham, and told them they would not be part of Abraham’s seed if they were unrighteous.

That arrogance appeared again within the congregations of Galatia and earned Paul’s ire. He assured the Gentile converts that the faithful in Christ would all be numbered among Abraham’s seed and inherit the promised blessings. He forcefully reminded the Jews that the Law of Moses was a school-master law laid upon them because of their rebelliousness.

The liberty of the Gospel of Christ (Galatians 4):

Paul uses the image of Ishmael and Isaac, born to Abraham. Ishmael’s mother was a bondwoman (Hagar); Isaac’s mother was a wife of the covenant (Sarah). Those who become Abraham’s seed are born into the covenant with their conversion to the gospel of Christ.

The fruits of the Spirit (Galatians 5):

Paul talks about the fruits of the Spirit and the blessings that come with living according to the gospel of Christ. He mixes together the losses we experience by following either the world or a dead law. A good discussion here: what’s the difference in behavior and in consequences of the two?

Be not weary in well-doing (Galatians 6):

Paul talks about circumcision again. The Jews had a huge problem sharing the same space with the uncircumcised. It was the ordinance that symbolized their descent and privilege from Abraham. It made them more comfortable when the Gentile converts submitted to circumcision.

In what ways are we different today and in what ways are we the same? We have some disquieting accounts from Al Fox, whose tattoos have earned her the wrath of many of the “Saints” she has encountered. James the Mormon, a successful rapper and musician, has had to change his stage name because of horrible abuse online from Latter-day Saints who don’t want to hear about his childhood struggles in his songs. Is there any relationship between these members and uncircumcised Gentile converts in the early church?

In Galatians 6, Paul encourages the following:

Paul then reminds the Galatians that they will reap what they sow. 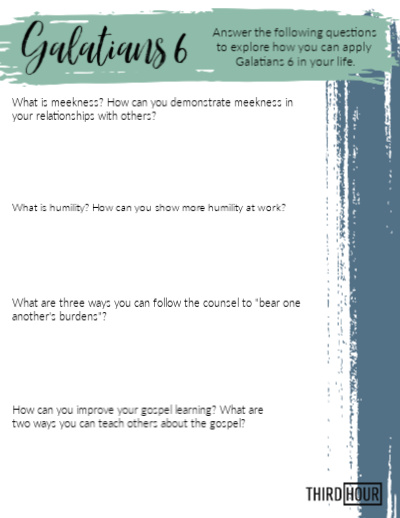 Fruits of the Spirit Activity Page 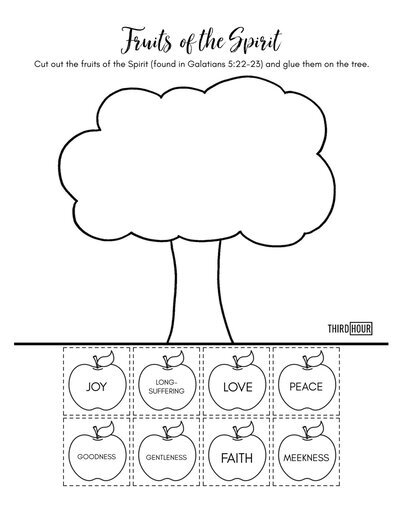