The Book of Mormon: A Book for Our Day 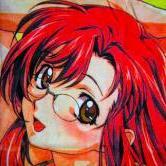 By Heather,
May 15, 2008 in Book of Mormon Scripture Reading