Everyone has favorites. Favorite flavors of ice cream, favorite athletes, favorite movies, the list goes on. Although personal preferences dominate nearly all aspects of our lives, one area that we, as members of the Church, simply won’t tolerate is the churchy one.

For our purposes, we looked at the frequency that scriptures were referenced by general authorities, not counting verses that have never been referenced. This doesn’t let us know the exact verses that may be held in (mild) derision by members but rather paints a cultural picture as to where we (don’t) place our scriptural emphasis. 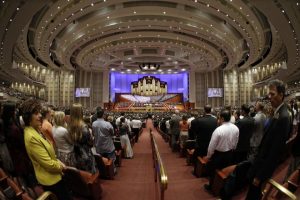 It isn’t terribly hard to think of a reason this verse has been quoted only once since the Church of Jesus Christ was restored. It is, shall we say, dark? We don’t like negativity, plus there is the difficulty in understanding what is meant by calling God jealous. The single official quotation of this verse was by the prophet Joseph Smith.

The greatest temporal and spiritual blessings which always come from faithfulness and concerted effort, never attended individual exertion or enterprise. The history of all past ages abundantly attests this fact. In addition to all temporal blessings, there is no other way for the Saints to be saved in these last days, [than by the gathering] as the concurrent testimony of all the holy prophets clearly proves, for it is written—’They shall come from the east, and be gathered from the west; the north shall give up, and the south shall keep not back.’ ‘The sons of God shall be gathered from afar, and his daughters from the ends of the earth.’

It is also the concurrent testimony of all the prophets, that this gathering together of all the Saints, must take place before the Lord comes to ‘take vengeance upon the ungodly,’ and ‘to be glorified and admired by all those who obey the Gospel.’ The fiftieth Psalm, from the first to the fifth verse inclusive, describes the glory and majesty of that event (Jan. 8, 1841, DHC 4:272).

I can tell you at least one reason we don’t hear this verse a lot: bowels. Bowels are an uncomfortable subject.

For we have great joy and consolation in thy love, because the bowels of the saints are refreshed by thee, brother.

Again we get the sole reference from Brother Joseph.

Dear Brethren:—It is a duty which every Saint ought to render to his brethren freely—to always love them, and ever succor them. To be justified before God we must love one another: we must overcome evil; we must visit the fatherless and the widow in their affliction, and we must keep ourselves unspotted from the world: for such virtues flow from the great fountain of pure religion, strengthening our faith by adding every good quality that adorns the children of the blessed Jesus, we can pray in the season of prayer; we can love our neighbor as ourselves, and be faithful in tribulation, knowing that the reward of such is greater in the kingdom of heaven. What a consolation! What a joy! Let me live the life of the righteous, and let my reward be like his! (May 2, 1835, DHC 2:220–222).

Book of Mormon: Words of Mormon 1:4 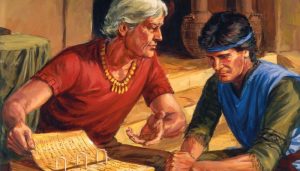 And the things which are upon these plates pleasing me, because of the prophecies of the coming of Christ; and my fathers knowing that many of them have been fulfilled; yea, and I also know that as many things as have been prophesied concerning us down to this day have been fulfilled, and as many as go beyond this day must surely come to pass.

Besides not being the most grammatically pleasing verse to come out of holy writ I can’t really think of a reason why Mormon’s thoughts concerning prophecy fulfillment aren’t more popular. Guess who referenced this verse?

Joseph Smith is quoted as saying,

We have all been children, and are too much so at the present time; but we hope in the Lord that we may grow in grace and be prepared for all things which the bosom of futurity may disclose unto us. Time is rapidly rolling on, and the prophecies must be fulfilled. The days of tribulation are fast approaching, and the time to test the fidelity of the Saints has come. Rumor with her ten thousand tongues is diffusing her uncertain sounds in almost every ear; but in these times of sore trial, let the Saints be patient and see the salvation of God. Those who cannot endure persecution, and stand in the day of affliction, cannot stand in the day when the Son of God shall burst the veil, and appear in all the glory of His Father, with all the holy angels (Teachings of the Prophet Joseph Smith, pg. 42). 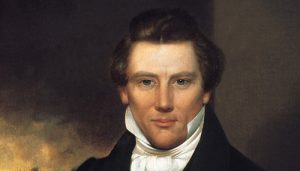 Okay, so it’s pretty hard to determine what the least quoted section of the Doctrine and Covenants is because so many verses are pretty specific. 47:3 is specific but also has a command to keep the history of the Church which makes it interestingly under-referenced.

And again, I say unto you that it shall be appointed unto him to keep the church record and history continually; for Oliver Cowdery I have appointed to another office.

Saying that Joseph Smith quoted this verse is somewhat problematic, in that, well, it was revealed to him in the first instance. Anyway, here is what he said:

Since the Twelve are now chosen, I wish to tell them a course which they may pursue, and be benefited thereafter, in a point of light of which they are not now aware. If they will, every time they assemble, appoint a person to preside over them during the meeting, and one or more to keep a record of their proceedings, and on the decision of every question or item, be it what it may, let such decision be written, and such decision will forever remain upon record, and appear an item of covenant or doctrine. An item thus decided may appear, at the time, of little or no worth, but should it be published, and one of you lay hands on it after, you will find it of infinite worth, not only to your brethren, but it will be a feast to your own souls (Teachings of The Prophet Joseph Smith, pg. 73).

“And thus we will finish the heavens and the earth, and all the hosts of them.”

Orson Pratt is the only one to officially quote this verse.

It was a spiritual creation first. We are also told that the earth was organized in a spiritual form, that is, that portion that gives life to the earth (JD 21:197).