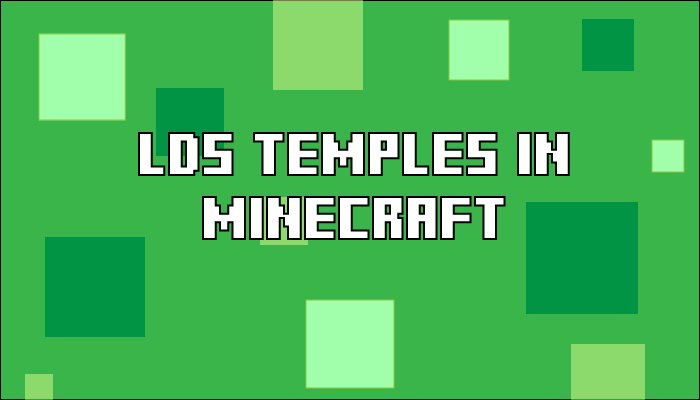 Maryland resident Justin Tate worked construction on the Dallas Texas Temple, designed the Preston England Temple, and laid the foundation for the Mesa Arizona Temple. Tate built the Bountiful Temple single-handedly — the Washington D.C. Temple only took him a couple hours to finish.

If you haven’t figured it out already, Justin Tate isn’t your typical architect. Tate builds all his construction projects in Minecraft.

Minecraft is a sand-box style video game, available on nearly every platform, in which the player explores, gathers resources, crafts tools, combats threats, and builds up the world around them with textured cubes. The game is family friendly, encouraging teamwork and creativity as users work together to construct their own reality. When Tate began playing Minecraft with his children, he built the Bountiful Temple into their virtual world.

“I decided to build the Bountiful Temple, (where my wife and I were married), into our little world so that my kids and I could always have a temple in view while we played.”

When the family switched to a newer version of the game, Tate began construction once again. This time, building his favorite and the family’s home temple, the Washington D.C. Temple.

Upon completing the temple and beginning construction on his next project, Matthew 5:14-16 came into Tate’s mind.

14 Ye are the light of the world. A city that is set on an hill cannot be hid.

15 Neither do men light a candle, and put it under a bushel, but on a candlestick; and it giveth light unto all that are in the house

16 Let your light so shine before men, that they may see your good works, and glorify your Father which is in heaven.

“I thought why keep these temples hidden for only my family to see when perhaps other people may like to see them too?  So, I made a Facebook page just so I could start collecting all my LDS themed artwork and to see if anybody would benefit from seeing it.  I knew it would not change the world or anything, but I thought if my temple art can at least brighten someone’s day a little, then it is worth it.”

Tate’s temples are a labor of love. The amount of time he puts into each project varies depending on the temple. Some took only a few hours, while the planning, measuring, and construction of others took months to complete.

For Tate, building these temples is more than just the gratification of completion — it’s also a coping mechanism to help him manage his Tourette’s syndrome.

“It helps with Tourette’s.  Although my tics never stop, for even a minute they can increase or decrease in frequency and severity depending on how stressed or relaxed I am. So anything that can help me relax is a good thing.  Building temples is very relaxing.  I love it.”

Currently, there are 4 finished temples, with 3 under construction, and one to be announced.