Faith Is the Coming Eclipse a Sign of the Times?

A total eclipse of the sun will be visible across the United States on Aug. 21, 2017. The last time this occurred in America was June 8, 1918, and the path crossed the United States from Washington State to Florida, a path very similar to the eclipse coming up. The eclipse of 1918 was not so complete, however.

The event next week will go down as the first total solar eclipse whose path of totality stays completely in the United States since 1776, according to various online sites. This makes many assume there was a similar eclipse in 1776, which is false.

When discussing the nature of eclipses and their paths, it’s easy to report incorrectly. Go to this website to read about various eclipses over the USA, their paths and totalities.

Christian videos talking about the coming eclipse as a sign of the times are proliferating on YouTube. Their audience is not very large, which means the entire population of America is NOT looking forward to this eclipse as an end-of-times event. Unless something unusual accompanies the eclipse, it may not be.

Christians are discussing these signs in the heavens, because heavenly signs were prophesied for the last days:

And he answered them, and said, In the generation in which the times of the Gentiles shall be fulfilled, there shall be signs in the sun, and in the moon, and in the stars; and upon the earth distress of nations with perplexity, like the sea and the waves roaring. The earth also shall be troubled, and the waters of the great deep…(JST Luke 21:25).

God has used astronomical signs often to announce special events. In Old Testament times the sun and the moon stood still while the troops of Joshua fought to victory. Later, a new star appeared to herald Christ’s birth, while the Book of Mormon peoples experienced a night with no darkness. The sky darkened in Jerusalem upon Christ’s crucifixion, while the Book of Mormon peoples experienced three days of utter darkness.

It seems, when we look at God’s dealings with mankind, that signs need to coincide with Jewish high holy days. Even in these last days, fulfillments have occurred on Jewish holy days. Joseph Smith received the gold plates on Rosh HaShanah, the Feast of Trumpets. Elijah brought the sealing keys on Bikkurim during Passover. Bikkurim was the occasion of a wave offering to guarantee a perfect harvest. This eclipse is happening in an auspicious Jewish year. According to the Jews, this is year 5777. That’s a lot of sevens, the number for perfection and completeness in Jewish numerology.

The blood moons in the near past alternated their appearances between Passover and the Feast of Tabernacles, occurring exactly on the holy days. Blood moons feel ominous. The Talmud (Succah 29a) refers to eclipses of the sun and the moon as unfavorable periods for the world.

Another Eclipse in Seven Years 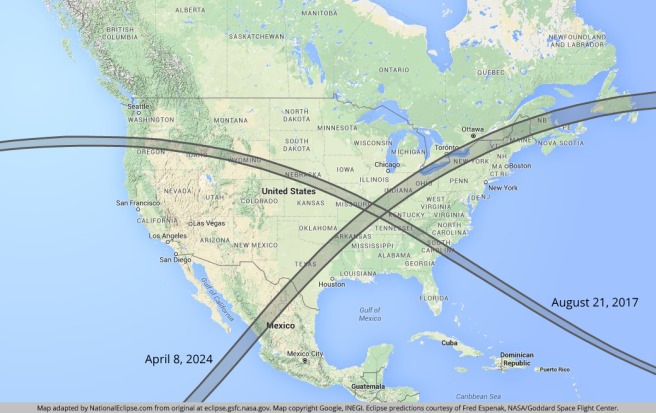 Both of these eclipses occur, not on Jewish holy days, but in the important times of preparation before holy days. This is the Jewish month of Elul, during which we prepare for the fall holy days, full of symbolism of the Second Coming. The 2024 eclipse will occur at the beginning of Nisan when Jews are preparing for the Passover, full of imagery of Christ’s birth, mission, death, and resurrection. It may be that “preparation” is the message.

The location where the two paths cross is above the New Madrid earthquake zone and the merging Wabash Valley seismic zone: 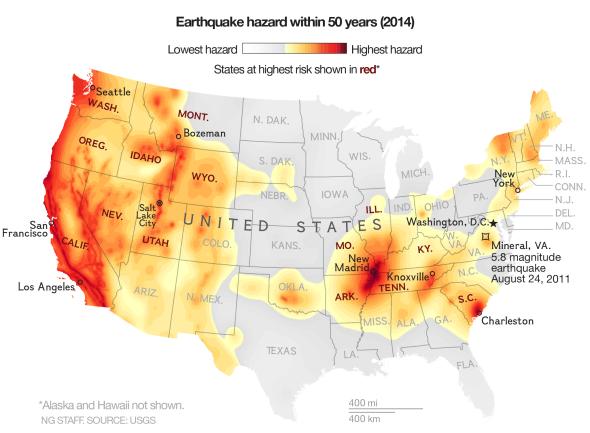 Mormon prophets have predicted some sort of calamity for Missouri that could clear the area of its inhabitants, but an eclipse in the sky doesn’t necessarily mean there will be a calamity on the ground. 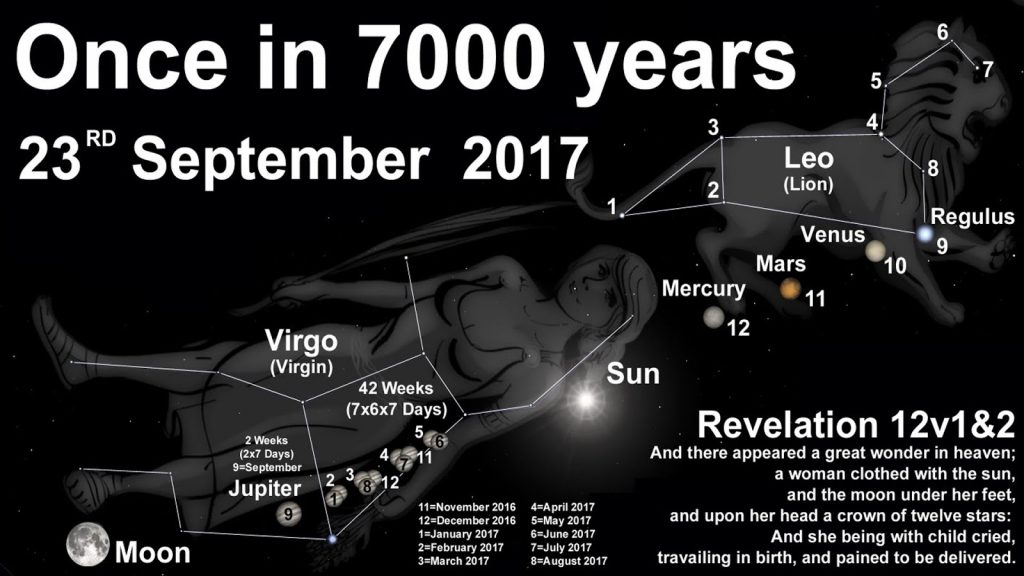 And there appeared a great wonder in heaven; a woman clothed with the sun, and the moon under her feet, and upon her head a crown of twelve stars:

And she being with child cried, travailing in birth, and pained to be delivered.

September 23 is the Jews’ Feast of Trumpets, or Rosh HaShanah (head of the year). The symbolism of the feast is to awake and arise for the separation of the righteous from the wicked in preparation for final repentance and judgment.

The image above shows how heavenly bodies will arrange themselves so that the moon is at the Virgin’s feet with the sun at her shoulder and twelve stars above her head. Jupiter moves essentially from the “womb” of the virgin constellation.

And there appeared another wonder in heaven; and behold a great red dragon, having seven heads and ten horns, and seven crowns upon his heads….and the dragon stood before the woman which was ready to be delivered, for to devour her child as soon as it was born. And she brought forth a man child, who was to rule all nations with a rod of iron: and her child was caught up unto God, and to his throne (Revelation 12: 3-5).

The message in these verses of Revelation is that Satan will not triumph, even through times of great tribulation.

Are the coming eclipses and the movements of the planets a wake-up call? How do we know for sure and stay away from wild speculation? Share your ideas in the comments below.