Faith Suck It Up and Forgive Yourself Already 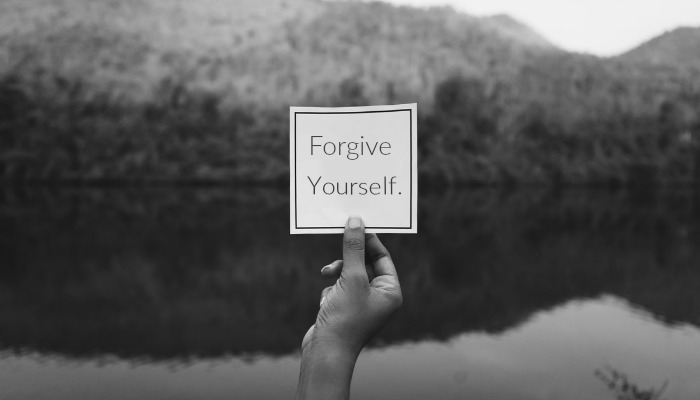 Look, I get it. You’ve made mistakes, maybe severe mistakes, in your past. I’ve made mistakes too. I may not be able to relate to what you’ve done specifically, but I can relate to years of beating yourself up about past sins. And, in the most loving way I can muster, this is what I have to say about it:

Suck it up and forgive yourself already.

You do deserve it

Check out the comforting words of the late Elder Richard G. Scott:

Now if you are one who cannot forgive yourself for serious past transgressions—even when a judge in Israel has assured that you have properly repented—if you feel compelled to continually condemn yourself and suffer by frequently recalling the details of past errors, I plead with all of my soul that you ponder this statement of the Savior:

‘He who has repented of his sins, the same is forgiven, and I, the Lord, remember them no more.

‘By this ye may know if a man repenteth of his sins— … he will confess them and forsake them.’12

To continue to suffer when there has been proper repentance is not prompted by the Savior but the master of deceit, whose goal is to bind and enslave you. Satan will press you to continue to relive the details of past mistakes, knowing that such thoughts make forgiveness seem unattainable. In this way Satan attempts to tie strings to the mind and body so that he can manipulate you like a puppet.

I testify that when a bishop or stake president has confirmed that your repentance is sufficient, know that your obedience has allowed the Atonement of Jesus Christ to satisfy the demands of justice for the laws you have broken. Therefore you are now free. Please believe it. To continually suffer the distressing effects of sin after adequate repentance, while not intended, is to deny the efficacy of the Savior’s Atonement in your behalf.

Does any of that apply to you? Is the “master of deceit” trying to bind you not only by the initial sin, but also by a second-tier inability to forgive yourself for that sin? Controlling our self image is a dangerous weapon in Satan’s arsenal.

A quick word on those judges in Israel

Of course, not all sins require the involvement of a bishop or stake president, and the line is somewhat blurred when it comes to how some sins should be dealt with. Like me, maybe you’ve been plagued by thoughts like, “Well, what if that sin I committed years ago was severe enough to require me to confess to the bishop, and I never did? Have I truly completed the repentance process?”

This may not be the answer you wanted to hear, but when in doubt, talk it out (with the bishop). Yeah, it’s tough, it’s humbling and can be embarrassing to talk about your faults to someone else, but peace of mind and conscience is worth the effort. If need be he’ll help you to repent. But at the very least he’ll be able to help you forgive yourself. Don’t let these things eat you up inside anymore. On multiple occasions, I’ve spoken with a bishop who has lovingly listened to my difficulties and simply reassured me that all is well. Each experience has given me closure and comfort.

Fifteen minutes of awkwardness with an understanding bishop is infinitely easier to handle than years of an anxious conscience.

Repentance is not a checklist

Oftentimes when we learn about repentance, we’re presented with a list of principles that make repentance complete. For example, Elder Neal A. Maxwell outlined the process in four steps:

But Elder Maxwell also said this in the same talk:

Real repentance involves not a mechanical checklist, but a checkreining [controlling] of the natural self. Often overlapping and mutually reinforcing, each portion of the process of repentance is essential.

These steps are all true and necessary, but approaching the repentance process as a series of checks on a list can be self-destructive. It can lead to an almost paranoid obsession with repenting. God forbid you should forget to apply this list to one tiny childhood sin and be damned for eternity. If that were the case, we’d all be in trouble. The mercy, power, and grace of Jesus Christ and His Atoning power extend far beyond what a checklist could possibly imply.

It’s not a checklist. It’s a principles-list. Let’s summarize all of these steps into something a little easier to manage:

Repentance is a change of heart

Check out this verse from after King Benjamin’s speech in the Book of Mosiah:

And they all cried with one voice, saying: Yea, we believe all the words which thou hast spoken unto us; and also, we know of their surety and truth, because of the Spirit of the Lord Omnipotent, which has wrought a mighty change in us, or in our hearts, that we have no more disposition to do evil, but to do good continually.

In a nutshell, repentance is a change of heart. And interestingly enough, it’s not necessarily a change we make in ourselves. It’s a change we allow Christ to make in us as we rely on His Atonement. For those of us that feel helpless to affect change in ourselves, it’s a comforting thought that Christ has no problem with it.

Repentance can be an event but is also a lifestyle

We must remember that most repentance does not involve sensational or dramatic changes, but rather is a step-by-step, steady, and consistent movement toward godliness.

Our sins are often (but not always) specific events that we can remember and stamp a date on, but repentance might not be that measurable. President Benson seems to describe repentance as something ongoing, something constant. He’s describing a lifestyle. He’s describing a process of becoming, not just doing. Repentance is more than praying for forgiveness every night (though that’s a good idea)—it’s how we live each day. It’s the effort we put into living the gospel. It’s how we treat our fellow man, including ourselves.

If the fear of sin and repentance has driven your sense of anxious perfectionism through the roof, let this quote from Elder D. Chad Richardson scare you into forgiving yourself:

There is no room in godly sorrow for self-contempt. Those who refuse to forgive themselves thus bear a double burden of sin, for not only do they carry the sin itself, but they also add to it the sin of self-condemnation and refusing to forgive. Indeed, refusal to forgive is cited in the scriptures as ‘the greater sin’ (D&C 64:9).

… Forgetting is part of forgiving. But forgiving oneself involves a special kind of forgetting. We don’t forget the sin and its effects; rather, the memory ceases to be part of how we see ourselves.

A change of heart implies that who we used to be is no longer who we are. That person who did those awful things years ago? Hopefully, that person is a stranger now. Think of it this way: You and I may sometimes stumble upon photographs of ourselves from years long since passed and we think, “Wow, I don’t even recognize myself anymore. I’ve changed and grown so much.” But then when Satan ensnares us in the memory of sins long since passed we wallow in self-condemnation, labeling ourselves as “forever the sinner I used to be.”

Stop it. Suck it up and forgive yourself. It’s difficult, and it even takes courage sometimes, but it’s necessary. On February 10, 2013, as I struggled (as per usual for that time) to forgive myself for my past, I heard a speech Elder Holland had given at Brigham Young University called “Remember Lot’s Wife.” Read it, if you haven’t already. When I first discovered it, the Spirit told me something that has stuck with me since. “That’s not me anymore, and I won’t look back,” were the words I scribbled in my little pocket notebook.

I’ve since gotten rid of the notebook, but I’ve kept that scrap of paper. Now it lives in my wallet, where it has been for years now as a constant reminder that I can change, that Christ can change me, that I am not my past and that if Christ himself has forgiven me, so can I.