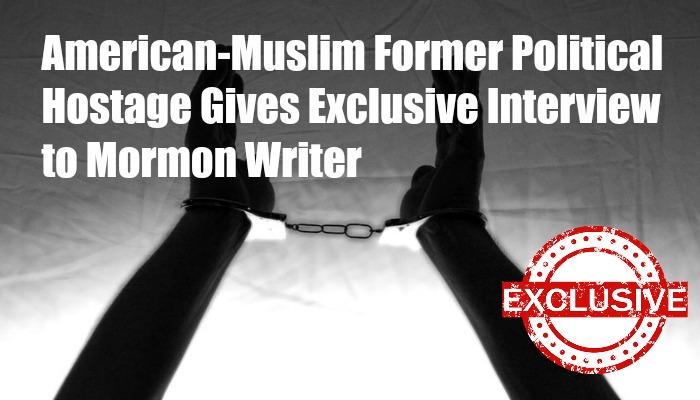 The men discovered gruesome evidence of human remains at the location where they were held. Throughout their time as hostages, the three Americans were subjected to various forms of physical and psychological torture, including regular threats of decapitation.

After Amr’s release, he became friends with a Mormon woman named Megan Steyskal. Megan, author of The Max Effect and one of MormonHUB’s featured writers, had the opportunity to conduct this exclusive interview with the surprisingly Mormon-loving Amr (with some added commentary from her):

AMR: Sometimes it was the cold edge of a blade against my neck … Every day the same, not knowing if this was the day the gun would be loaded or blank. Not knowing when the blade would swing back at my throat or fall away. And every day they’d laugh at me, “Why aren’t you scared Amr? We could kill you now if we wanted . . . why aren’t you scared?”

MS: Amr, why weren’t you scared?

AMR: Because God is God. He is in control. And if God preordained me to die that day then those men were just tools in His hands.

MS: You took the power away from them.

AMR: As soon as they knew I wasn’t scared there was nothing more they could do to me. We were released soon after. But I knew I was going home.

MS: You told them that?!

<<He laughed his quiet laugh and my shoulders relaxed as I let out a breath of air from my tightened chest.>>

AMR: You are Mormon, I am Muslim. But God is God.

<<Somewhere in the smoothness of his rich accent, I managed to catch my breath. I had been silent on the other end of the phone, my chest tightening and my mouth dropping as he led me through his day-to-day hell. It wasn’t until he shared his faith that I was able to comprehend, if just a little, how it was possible for him to survive the physical and psychological torture he endured for thirty-one days.

It is this tie that binds us: a Mormon and a Muslim finding a connection through our faith.
Pulling heavily from my own spiritual journey allowed me this small glimpse of understanding.

And we are never alone.

When I first reached out to Amr I only knew a few things about him: that he was an Army vet, Muslim, and that he had a soft spot for Mormons. Curiosity being as it were we formed a slow acquaintance through mutual friends and the wonders of Facebook. Once I thought we had enough time between us to establish a patch of trust, I reached out for an interview only to discover my carefully laid out plan was time wasted—he would’ve done it months ago if I had just asked.>>

AMR: You are Mormon, I trust you. Of course, I will talk to you. You are the boss.

<<If only it was always so simple. So he and I sat down on other ends of the phone, me in
Oregon, he in Arizona and we dived into exactly what brought him to this point in his life.
And why the great attitude towards Mormons?>>

AMR: I was born in South Africa. My mother is South African and my father Egyptian. When I was 6 months old my father took me to Cairo. I was six when I started karate. I have a black belt and won a gold medal in the Olympics. I have a degree in Latin and Greek Archeology. When I moved back to South Africa in my twenties I became a Police Officer. I did border patrol, Crime unit, SANAB (South African Narcotics and Alcohol Bureau), organized crimes and High Threat, High-Value Personal Protection Unit.

MS: What was your first experience with Mormons?

AMR: My best friend Andrew in South Africa, he is Mormon. I love Mormons.

MS: You were born and raised Muslim?

AMR: Yes, but my mother was Roman Catholic—I would spend time playing at the Catholic church across the street from our house.

MS: Have you read the Book of Mormon?

AMR: (Chuckles) Yes, I have read parts of the Book of Mormon.

I spent a lot of time with Andrew and his Mormons. I would go to your church for Sabbath because there weren’t any Mosques around. I would meet all the missionaries. They were from Australia and England and New Zealand, all over. I taught them self -defense and how to use blades to protect themselves. Then we’d play basketball, volleyball or tennis. When I was hired on as a security consultant for the Johannesburg Temple I got to touch the gold statue at the top.

AMR: Yes that one. Why, is there another one? (Chuckling)

MS: You also worked for a private security firm when you were hired to protect Mormon businessmen, can you tell me about that?

AMR: When the ANC (African National Congress) took over the mining companies it left a lot of affluent businessmen as prime targets by organized crime. Mormon businessmen who were the middlemen and wholesalers were targets for attacks, hijacking, theft. They were being threatened with nothing to protect them.

MS: That’s where you came in.

MS: Were they just threats? Were you just in charge of preparation and security or did you have to…

AMR: Yes, there were many times I had to stop a physical threat.

MS: Can you tell me a little of your background in security?

AMR: After that, I moved to Holland in 2000 as a training instructor for Executive and Personal protection and security details. Then I moved on from there.

MS: Those are a lot of acronyms. When did you join the US Army?

AMR: I moved to America when I was 34 and joined the Army. I have done 16 deployments altogether.

MS: Last year, when you were captured?

AMR: I was in Baghdad.

MS: Can we talk about that?

AMR: Yes, yes. What do you want to know?

MS: What do you do to cope with what happened to you?

AMR: What do you mean?

MS: Do you have hobbies, therapy, physical activities to help you heal?

AMR: Heal from what? I know what you are trying to say, but Megan, I do not live in fear. I do not linger on the past. I have lost a lot of brothers. I have been stabbed, shot and captured. Tortured with electric wires and forced in stress positions, but you cannot linger in the past.

If you let yourself slip into that fear it is like an avalanche, everything starts to fall. But it is all in the past. I will not use this as a crutch to cripple me. Every scar reminds me that I am alive. I am a survivor. God wants me alive for a reason. I do not know what that reason is. 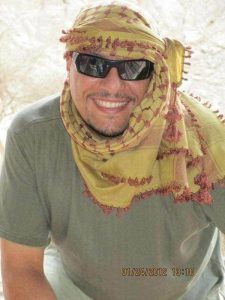 I wake up every morning thankful that my hands are not in chains. I am thankful for what God gives me: that I have water and am eating nice meals. I can feel the grass under my feet and everything is more colorful than before.

AMR: You are welcome. I love Mormons! Don’t forget you promised to introduce me to some single Mormon women, I will hold you to it boss.

<<All too often the media pins us against each other.

But this doesn’t have to be the mantra that we repeat. We are united in our faiths, in our
humanity, in our need to endure. We can fight together against the crippling effect of “us versus them” mentality so that we can all start to see the world as vibrant and as beautiful as my new friend does.

Thank you Amr for helping me see just how colorful life can be.>>

For more information about Amr’s experience, check out the following news coverage:

Remember the 3 Americans kidnapped in Iraq? Here’s the real story 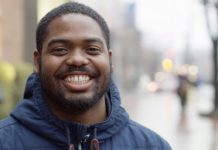