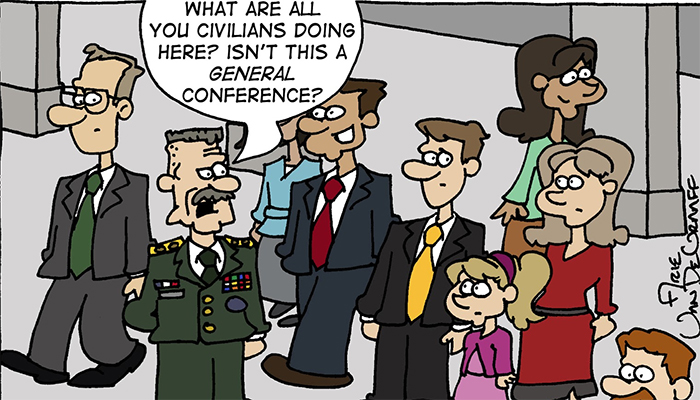 For Latter-day Saints, General Conference is a shared cultural experience. No matter where we are in the world, we are seeing the same speakers, deliver the same messages. Naturally this great gathering brings with it certain cultures and traditions.

And here at LDS.net we’re making fun of all those with these 16 hilarious comics.

It’s a What Conference?

General Conference doesn’t mean the same thing to everyone. I think these people may be a bit confused.

What Should I Wear to General Conference?

I Heard Food is a Big Deal With General Conference

You have heard correctly

How Has Technology Changed General Conference?

From Jon Clark at Honest Jon

Ah! The Beautiful Melody of the Mormon Tabernacle Choir. And snoring.

But at least there are ways to stay awake!

From Jon Clark at Honest Jon

And What Should I do When I’m Actually Listening?

Of course, at the end of the day you should manage to find some time to listen to the inspired words being spoken.

No matter how much we poke fun of conference time, there’s no denying what an important spiritual enrichment it is.