Here we see that the chapters of Romans are not in chronological order. We are visualizing him in the last few years of his ministry under house arrest in Rome, but then in Romans 15, he is still in Corinth, planning to go to Jerusalem and then someday to Rome.

In Romans 7, Paul talks about the law, how we define sin, and how the desire to sin happens even when we know the law.

There’s a mixture of messages here. The Law of Moses educated Paul on what is sin and what is goodness. But the law is not enough to save us. We need Christ for that. Christ’s law must be written in our hearts. Then Paul laments because even though he knows the law both in his mind and heart, the body is weak.

To be spiritually-minded is life and peace (Romans 8):

Paul talks about how if we are led by the Spirit of Christ, we can continue eternally and overcome the carnal mind, which is an enemy of God. If we live by the Spirit, we can become the sons and daughters of Christ.

In verse 17, Paul talks about becoming “joint-heirs with Christ.” It bothers other Christians that we believe in “theosis” — that we can become like God. But if we stand to inherit everything that Christ has, what else can it mean? What He has is the ability to create and heal and increase. These all can be ours.

In verse 28, Paul talks about all things working together for the good of those who love Christ. Then Paul talks about the predestination of the elect, which many Christians have not understood. A discussion about the difference between predestination and foreordination could be productive. Using the preaching of Paul, the Calvinists (of which there are many even in Evangelical churches) teach what they call TULIP  philosophy. See how this doctrine differs from our own:

Verses 38 and 39 are especially beautiful:

For I am persuaded, that neither death, nor life, nor angels, nor principalities, nor powers, nor things present, nor things to come,

Nor height, nor depth, nor any other creature, shall be able to separate us from the love of God, which is in Christ Jesus our Lord.

The foreordination of the House of Israel (Romans 9):

The Lord works with a system of the “firstborn.” The firstborn of everything belongs to God and is meant to serve Him. Israel is the firstborn of the world, and she has the duty to be a light to the world and to teach the gospel. (The Levites are considered the firstborn of Israel, so they serve in the temple.) Paul laments that the people of Israel are not all worthy of their foreordination. Those who are worthy become part of Israel.

Verses 32 and 33 talk about Christ as a stumbling block. Many Jews would not accept Him and therefore have stumbled by relying on the works of Moses.

Protestants accuse us of being a “works-based gospel” and state that salvation comes from belief in Christ. See how clearly that message seems to come forth in the NIV translation of Romans 10:

Justification is to have your repentance approved by God and to be forgiven by Him. Are we justified by confessing that Jesus is the Christ? Or is there more to it? There is no Joseph Smith translation for Romans.

Paul discusses that though most of Israel won’t accept the Savior, there are some who will. Paul is discouraged; he’s a descendant of Abraham, Isaac, Jacob, and Benjamin. Paul goes on to separate grace and works. In the previous lesson, we discuss this and include a great video for discussion about the relationship between grace and works.

Paul rejoices in his mission to the Gentiles in that they will take the gospel to the Israelites. He talks about the branches of the olive tree, similar to Jacob 5 in the Book of Mormon, and urges all to be humble, as the root and branches depend on each other to bear fruit. Paul says Israel will have hardened hearts until the fulness of the day of the Gentiles.

The members are called to share their gifts (Romans 12):

Paul talks about how we should give ourselves in service. We are all members of one body and have various gifts to bring to service in the Church. From the NIV version (vs 6 – 8):

Paul finishes Romans 12 by encouraging members of the Church to be joyful, loving, and merciful.

The twelfth article of faith (Romans 13):

Paul essentially gives the same instruction as we have in Articles of Faith 12: We believe in being subject to kings, presidents, rulers, and magistrates, in obeying, honoring, and sustaining the law.

Paul says governing bodies are there for a reason and upheld by God. He urges members of the Church to pay taxes. This is an interesting directive for the early Saints because they refused to honor the Roman emperor as a god. They refused to take part in pagan festivals or to offer sacrifices to state deities. Civil obedience could be dicey, but Paul encouraged it.

Paul then encourages the Saints to love their neighbors as themselves. Then he says “the time is near,” essentially. The early Saints thought the Second Coming was nigh. As Nero manifested himself as persecutor of the Saints, they identified him as the anti-Christ.

The weak and the strong among us (Romans 14):

Paul counsels the Saints not to judge each other by how they think the gospel should be lived. He talks specifically of diet. Some choose to eat in a certain way, declaring it good and right, while others disagree. This affects us in how we choose to live the Word of Wisdom and the judgment we pass on each other when people see the law differently.

Encourage each other (Romans 15):

Paul talks about his calling to teach the Gentiles and his gratitude for that calling. One thing he delights in is that the Gentiles didn’t have preconceived notions about how to be a Christian, while the Jews had all sorts of Jewish requirements and traditions that held them back. Remember that Christianity was viewed as a sect of Judaism for a very long time.

In this letter, Paul expresses his desire to travel to Jerusalem and then to Rome. This chapter was written around 50 A.D. in Corinth.

Beware of people who lay a snare for the faithful (Romans 16):

After recommending several leaders (both men and women) who have been faithful and reliable, Paul counsels against being swayed by people who corrupt the gospel in order to destroy others’ faith. They are not serving Christ, but their own appetites.

What are Your Gifts? 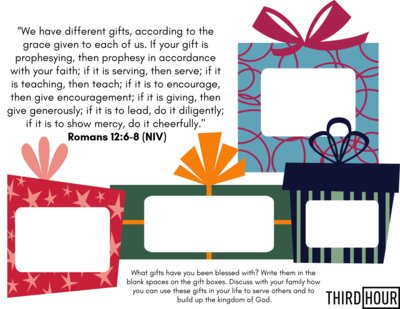 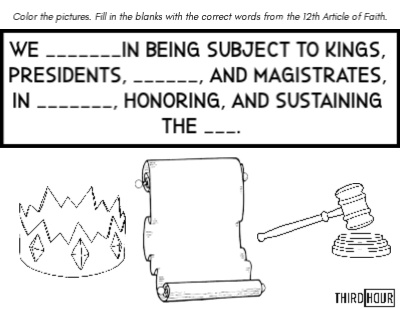