Last night’s game between The United States and Belgium was a record breaking event. The twitterverse has been buzzing about the amazing performance of Tim Howard, the keeper for the USA team, who blocked a record-breaking 16 shots at the goal during the course of the game. The previous record was 13 saves made by Peru’s Ramon Quiroga back in 1978. However, Howard’s effort wasn’t enough and Belgium beat out the Americans 2-1 after going into extra time.

Mormons in the “twitterstake,” the online community of Mormons on Twitter, reacted to the game. See some of the top tweets below:

Can we please see @TimHowardGK and @common together? Can @ancestry tell us if these two are Brothas? #suspenseiskillingme

Donny Osmond was quite excited throughout the game

We just watched a historic games. 16 saves by @TimHowardGK.#FifaWorldCup

What a game!
Overtime!

Tim Howard's blocking skills are insane! Can't believe how many he has blocked. #USAvsBelgium 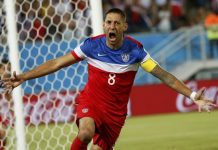 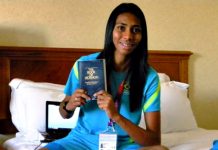 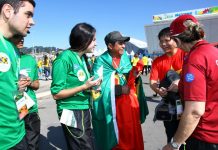