Faith Belief The Crucifixion and the Atonement 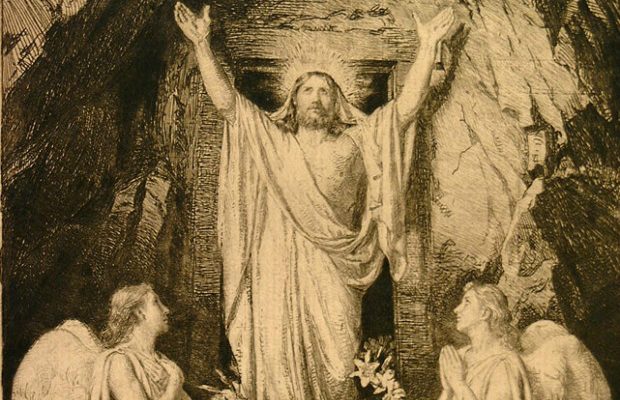 There is no greater expression of love than the heroic Atonement performed by the Son of God.

In today’s world of chocolate bunnies and plastic eggs, sometimes I think the real purpose and meaning of Easter get lost in the chaos. Good Friday, Maundy Thursday, and Easter Sunday are becoming words on a calendar. But these intertwined events are the most significant in the history of mankind. Elder Jeffrey R. Holland said:

…Never more than at Easter time is there so much meaning in that declaration from John the Beloved…: “For God so loved the world, that he gave his only begotten Son, that whosoever believeth in him should not perish, but have everlasting life.”

Easter is a celebration of Jesus Christ’s victory over the grave— which began in the Garden of Gethsemane, continued with His crucifixion and death and culminated in the glorious Resurrection. Each is an important component of the Savior’s Atonement. We can’t fully appreciate God’s love for us unless we understand the depth of His commitment and sacrifice in our behalf.

To understand the Atonement, we must understand the reason for it. We are all literal sons and daughters of our Heavenly Father. He sent us to earth to be tested to see if we would obey Him in all things. We wouldn’t remember our heavenly home; thus, we would have to learn to follow Him in faith. As part of this plan, He sent His Son, Jesus Christ, to earth to set the example for us—and to perform the Atonement that would allow us the opportunity to live with our Heavenly Father again. Elder Russell M. Nelson, an Apostle of Jesus Christ, said of the Savior:

His mission was the Atonement. That mission was uniquely His. Born of a mortal mother and an immortal Father, He was the only one who could voluntarily lay down His life and take it up again (see John 10:14–18). The glorious consequences of His Atonement were infinite and eternal. He took the sting out of death and made temporary the grief of the grave (see 1 Corinthians 15:54–55). His responsibility for the Atonement was known even before the Creation and the Fall. Not only was it to provide for the resurrection and immortality of all humankind, but it was also to enable us to be forgiven of our sins—upon conditions established by Him. Thus His Atonement opened the way by which we could be united with Him and with our families eternally. This prospect we esteem as eternal life—the greatest gift of God to man (see Doctrine & Covenants 14:7).

No one else could effect the Atonement. No other person, even with the greatest wealth and power, could ever save one soul—not even his own (see Matthew 19:24–26). And no other individual will be required or permitted to shed blood for the eternal salvation of another human being. Jesus did it “once for all” (Hebrews 10:10).

Of the many magnificent purposes served in the life and ministry of the Lord Jesus Christ, one great aspect of that mission often goes uncelebrated. His followers did not understand it fully at the time, and many in modern Christianity do not grasp it now, but the Savior Himself spoke of it repeatedly and emphatically. It is the grand truth that in all that Jesus came to say and do, including and especially in His atoning suffering and sacrifice, He was showing us who and what God our Eternal Father is like, how completely devoted He is to His children in every age and nation. In word and in deed Jesus was trying to reveal and make personal to us the true nature of His Father, our Father in Heaven. 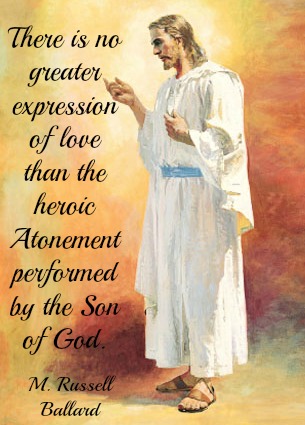 The atoning sacrifice of Jesus Christ began with His suffering in the Garden of Gethsemane, where He took upon Himself the sins of the world. It is the ultimate expression of God’s love for us. Elder M. Russell Ballard said:

There is no greater expression of love than the heroic Atonement performed by the Son of God. Were it not for the plan of our Heavenly Father, established before the world began, in a very real sense, all mankind—past, present, and future—would have been left without the hope of eternal progression. As a result of Adam’s transgression, mortals were separated from God (see Romans 6:23) and would be forever unless a way was found to break the bands of death. This would not be easy, for it required the vicarious sacrifice of one who was sinless and who could therefore take upon Himself the sins of all mankind.

Thankfully, Jesus Christ courageously fulfilled this sacrifice in ancient Jerusalem. There in the quiet isolation of the Garden of Gethsemane, He knelt among the gnarled olive trees, and in some incredible way that none of us can fully comprehend, the Savior took upon Himself the sins of the world. Even though His life was pure and free of sin, He paid the ultimate penalty for sin—yours, mine, and everyone who has ever lived. His mental, emotional, and spiritual anguish were so great they caused Him to bleed from every pore (see Luke 22:44). And yet Jesus suffered willingly so that we might all have the opportunity to be washed clean—through having faith in Him, repenting of our sins, being baptized by proper priesthood authority, receiving the purifying gift of the Holy Ghost by confirmation, and accepting all other essential ordinances. Without the Atonement of the Lord, none of these blessings would be available to us, and we could not become worthy and prepared to return to dwell in the presence of God.

It is difficult enough for me to comprehend the agony of Christ’s suffering in the Garden of Gethsemane. But our Savior’s suffering did not end there. President Thomas S. Monson said:

Following the agony of Gethsemane, now drained of strength, He was seized by rough, crude hands and taken before Annas, Caiaphas, Pilate, and Herod. He was accused and cursed. Vicious blows further weakened His pain-racked body. Blood ran down His face as a cruel crown fashioned of sharp thorns was forced onto His head, piercing His brow. And then once again He was taken to Pilate, who gave in to the cries of the angry mob: “Crucify him, crucify him.”

He was scourged with a whip into whose multiple leather strands sharp metals and bones were woven. Rising from the cruelty of the scourge, with stumbling steps He carried His own cross until He could go no farther and another shouldered the burden for Him.

Finally, on a hill called Calvary, while helpless followers looked on, His wounded body was nailed to a cross. Mercilessly He was mocked and cursed and derided. And yet He cried out, “Father, forgive them; for they know not what they do.”

The agonizing hours passed as His life ebbed. From His parched lips came the words, “Father, into thy hands I commend my spirit: and having said thus, he gave up the ghost.” As the serenity and solace of a merciful death freed Him from the sorrows of mortality, He returned to the presence of His Father.

Thus, the agony of the Atonement was completed on the cross at Calvary. Jesus Christ’s sacrifice was complete.

The crucifixion is an important part of Jesus Christ’s victory over death. Elder Ballard said:

… No one had the power to take the Savior’s life from Him. He gave it as a ransom for us all. As the Son of God, He had the power to alter the situation. Yet the scriptures clearly state that He yielded Himself to scourging, humiliation, suffering, and finally crucifixion because of His great love towards the children of men (see 1 Nephi 19:9–10).

At the last moment, the Master could have turned back. But He did not. He passed beneath all things that He might save all things. His lifeless body was hurriedly but gently placed in a borrowed tomb. No words in Christendom mean more to me than those spoken by the angel to the weeping Mary Magdalene and the other Mary when, on the first day of the week, they approached the tomb to care for the body of their Lord. Spoke the angel: “Why seek ye the living among the dead? He is not here, but is risen.”

Our Savior lived again. The most glorious, comforting, and reassuring of all events of human history had taken place—the victory over death. The pain and agony of Gethsemane and Calvary had been wiped away. The salvation of mankind had been secured. The Fall of Adam had been reclaimed. The empty tomb that first Easter morning was the answer to Job’s question, “If a man die, shall he live again?”

Jesus Christ became the Savior and Redeemer of the world by enduring the pain and agony in Gethsemane and on the cross. He suffered physically and emotionally—even for those who mocked, scourged and killed Him. But He overcame it all, and completed His victory over the grave with His Resurrection. Elder Dallin H. Oaks taught:

In our eternal journey, the resurrection is the mighty milepost that signifies the end of mortality and the beginning of immortality. The Lord described the importance of this vital transition when He declared, “And thus did I, the Lord God, appoint unto man the days of his probation—that by his natural death he might be raised in immortality unto eternal life, even as many as would believe” (Doctrine & Covenants 29:43).

The “lively hope” we are given by the resurrection is our conviction that death is not the conclusion of our identity but merely a necessary step in the destined transition from mortality to immortality. This hope changes the whole perspective of mortal life. The assurance of resurrection and immortality affects how we look on the physical challenges of mortality, how we live our mortal lives, and how we relate to those around us.

The assurance of resurrection gives us the strength and perspective to endure the mortal challenges faced by each of us and by those we love, such things as the physical, mental, or emotional deficiencies we bring with us at birth or acquire during mortal life. Because of the resurrection, we know that these mortal deficiencies are only temporary!

The Universal Blessings of the Atonement

The Atonement of Jesus Christ is a blessing to all mankind. Elder Ballard taught:

The Atonement of Jesus Christ was an indispensable part of our Heavenly Father’s plan for His Son’s earthly mission and for our salvation. How grateful we should be that our Heavenly Father did not intercede but rather withheld His fatherly instinct to rescue His Beloved Son. Because of His eternal love for you and for me, He allowed Jesus to complete His foreordained mission to become our Redeemer. The gift of resurrection and immortality is given freely through the loving grace of Jesus Christ to all people of all ages, regardless of their good or evil acts. And to those who choose to love the Lord and who show their love and faith in Him by keeping His commandments and qualifying for the full blessings of the Atonement, He offers the additional promise of exaltation and eternal life, which is the blessing of living in the presence of God and His Beloved Son forever.

Easter takes on a deeper meaning as we gain a greater understanding of its significance in the history of mankind. Through His death, the Savior offers us the gift of life. The Atonement of Jesus Christ is a gift of hope—hope in the resurrection, hope for a better world, hope that things will get better. This is what we celebrate at Easter.