Faith What You Didn’t Know about General Conference 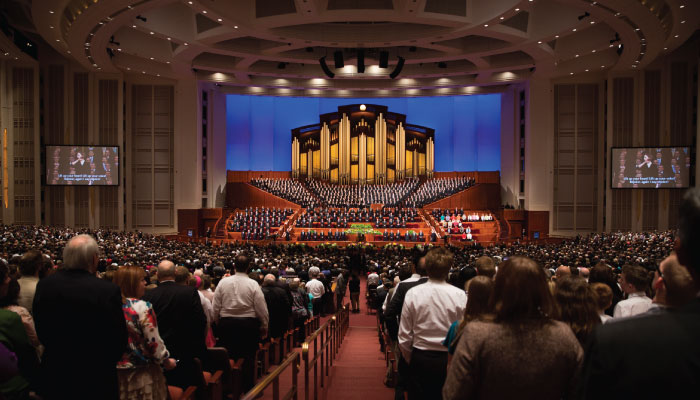 Today, the Conference Center in Salt Lake City, which seats 21,000 people, completely fills every semi-annual session — except, you know, this time around. (Boy, was President Nelson right that April 2020 conference will be different than any other!) Talks are broadcast on the radio, television, and Internet. But conference wasn’t always held in a 1.4-million-square-foot, air-conditioned facility. Here are some fun facts about general conference you probably didn’t know.

Before the Conference Center was completed in 2000, conference had been held in several different places: in the Salt Lake Tabernacle (most often since 1867), in Great Britain in 1840, and even on a riverboat on the Big Blue River in Missouri.

In 1971, the Ensign magazine began producing semi-annual conference editions with a transcription of each talk. But before magazines and recording devices, talks had to be transcribed by hand and printed in newspapers. The first full report of conference was published by the Deseret News in 1850. Prior to modern technology, this was made possible because George D. Watt, a young reporter for the Deseret News, had learned shorthand and was able to transcribe the talks.

Today it would be almost unheard of to cancel or change the dates of general conference, but it’s happened twice in the past. Once, in 1919, the April meetings were postponed until June due to a flu epidemic. Another flu epidemic in 1957 caused the First Presidency to completely cancel the October sessions. They announced a week prior to conference that, “out of regard for the health of the people, the semiannual conference of The Church of Jesus Christ of Latter-day Saints, scheduled for Oct. 4, 5 and 6, 1957, together with all meetings planned in connection therein, will not be held . . .”

And although April 2020 conference isn’t cancelled, a lot of changes are taking place: while the First Presidency will preside, no one other than those speaking or praying will be present at each session. The music for the conference has been prerecorded, and rather than taking place at the Conference Center, conference will be broadcast from a small auditorium on Temple Square.

General conference is now viewed in 102 different countries and is translated into 90 different languages. Beyond those attending the live sessions in Salt Lake City, approximately 595,000 households in North America alone watch the Sunday morning session on television.

Do you know any other interesting facts about general conference? Comment below!