Faith LDS Conference 5 Times the Apostles Did. Not. Mince. Words. AT. ALL. 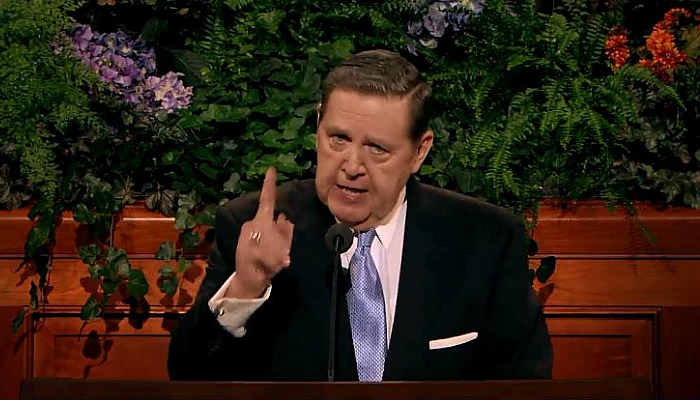 OK, apostles have pretty much always been known to be fairly blunt. They don’t usually mince words when trying to get a message across. But there have been a few times in modern church history when apostles have really gone out of their way to make their message explicitly clear. Here are just five impactful examples of that.

I just recently learned about this 1977 General Conference talk from this ThirdHour article. And let me tell you, the talk is pretty sweet. Entitled Balm of Gilead, Elder Packer digs into people that can’t seem to let the little things go. Take a look at this clip, starting at 14:48,

And if you’re in the middle of a movie or hiding in your closet from your children, here’s a transcript of one of my favorite parts:

Often, however, the things we carry are petty, even stupid. If you are still upset after all these years because Aunt Clara didn’t come to your wedding reception, why don’t you grow up? Forget it.

If you brood constantly over some past mistake, settle it—look ahead.

If the bishop didn’t call you right—or release you right—forget it.

If you resent someone for something he has done—or failed to do—forget it.

We call that forgiveness.

2. President Uchtdorf reminds us to just “STOP IT”

You probably remember this one. How could you forget? President Uchtdorf gave this talk in General Conference back in 2012. It’s called The Merciful Shall Obtain Mercy. Here’s where he drops the mic:

This topic of judging others could actually be taught in a two-word sermon. When it comes to hating, gossiping, ignoring, ridiculing, holding grudges, or wanting to cause harm, please apply the following:

It’s that simple. We simply have to stop judging others and replace judgmental thoughts and feelings with a heart full of love for God and His children. God is our Father. We are His children. We are all brothers and sisters. I don’t know exactly how to articulate this point of not judging others with sufficient eloquence, passion, and persuasion to make it stick. I can quote scripture, I can try to expound doctrine, and I will even quote a bumper sticker I recently saw.

You see that exclamation point after the words ‘stop it’? I don’t think apostles use those very often.

3. Elder Holland grabs us by the lapels

This was one powerful 2011 Priesthood Session of General Conference. Elder Holland took the stand and really rallied the troops. The talk is called We Are All Enlisted, and thankfully I was already on a mission when he gave it.

He isn’t playing around:

Now, brethren, we speak boldly to you because anything more subtle doesn’t seem to work. We speak boldly because Satan is a real being set on destroying you, and you face his influence at a younger and younger age. So we grab you by the lapels and shout as forcefully as we know how:

Hark! the sound of battle sounding loudly and clear;

My young friends, we need tens of thousands of more missionaries in the months and years that lie ahead.

I testify that one cannot come to full faith in this latter-day work—and thereby find the fullest measure of peace and comfort in these, our times—until he or she embraces the divinity of the Book of Mormon and the Lord Jesus Christ, of whom it testifies. If anyone is foolish enough or misled enough to reject 531 pages of a heretofore unknown text teeming with literary and Semitic complexity without honestly attempting to account for the origin of those pages—especially without accounting for their powerful witness of Jesus Christ and the profound spiritual impact that witness has had on what is now tens of millions of readers—if that is the case, then such a person, elect or otherwise, has been deceived; and if he or she leaves this Church, it must be done by crawling over or under or around the Book of Mormon to make that exit. In that sense the book is what Christ Himself was said to be: ‘a stone of stumbling, … a rock of offence,’ a barrier in the path of one who wishes not to believe in this work.

… I ask that my testimony of the Book of Mormon and all that it implies, given today under my own oath and office, be recorded by men on earth and angels in heaven. I hope I have a few years left in my “last days,” but whether I do or do not, I want it absolutely clear when I stand before the judgment bar of God that I declared to the world, in the most straightforward language I could summon, that the Book of Mormon is true, that it came forth the way Joseph said it came forth and was given to bring happiness and hope to the faithful in the travail of the latter days.

This one still gives me the goosebumps. The entire talk is fabulous, so if you haven’t seen it, see it. If you haven’t read it, read it. I’m tempted to include three addresses from Elder Holland in this list, but for the sake of variety, I won’t. But if you haven’t heard Elder Holland’s Missionary Training Center address called Feed My Sheep, you really need to. Its message is impactful and it only gets better as it goes on. It gets really intense during the last 15 minutes or so.

5. President Uchtdorf throws some shade at the YSA men

This was the zinger of the year, and another talk I couldn’t help but include in this list. It comes from President Uchtdorf’s 2016 talk In Praise of Those Who Save. In one brief section of his talk, he addresses the young single adults (it was a Priesthood Session, so he’s talking to the men in particular). Here’s what he had to say:

The line in question is short, sweet, and straight to the point:

My beloved brethren, may I remind you, if there were a perfect woman, do you really think she would be that interested in you?

The prophets and apostles hold themselves accountable first and foremost to God. They don’t beat around the bush. If they feel inspired to say something, they say it, loud and clear. We’d all do well to listen.

Can you think of any notably blunt talks from apostles that we missed? Let us know some of your favorites in the comments section.