Faith Scripture 5 Fascinating Facts About the Book of Moses that You Probably Won’t... 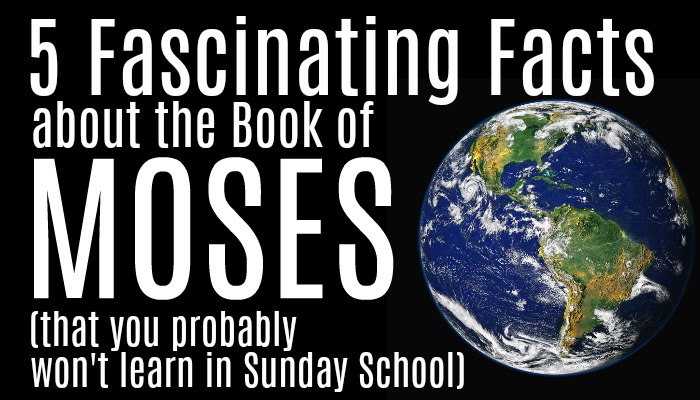 1. The Book of Moses is Supposed to Be in the Bible

Okay, what we’re trying to say is that the Book of Moses was originally part of the Bible—that is, part of Genesis. According to this Ensign article written by a BYU professor of religion: “The material constituting the eight chapters of the book of Moses is an extract from Joseph Smith’s translation of the Bible. More precisely, chapter one of Moses is an account of a revelation given to the Prophet Joseph just prior to, or at the commencement of, the translation, while Moses chapters two through eight constitute his translation of Genesis from chapter one through chapter six, verse thirteen.” So, technically, chapter one of Moses should have been the true beginning of the Holy Bible as we know it. Over time, however, it was removed and simply restored when Joseph Smith was given the responsibility to re-translate that book of scripture.

2. There Was No “Book of Moses” in the Original Pearl of Great Price

Originally published in 1851 by Elder Franklin D. Richards while he was president of the British mission, the Pearl of Great Price was simply a pamphlet used to circulate more of the teachings of the Church that had not previously been accessible to the British saints. This pamphlet included bits and pieces of the Book of Moses, but not in chronological order. It included verses from the current chapters 1, 2, 6, 7, and 8.

In 1878, when Elder Parley P. Pratt oversaw the second publication of the Pearl of Great Price in Salt Lake City, the chapters of Moses were placed in order and the Book of Moses was included in its entirety.

3. The Book of Moses Did Not Become Canonized as LDS Scripture Until Almost 50 Years After Joseph Smith Had Translated It

According to research by Church historians, Joseph Smith completed his translation of the Book of Moses in February of 1831. It wasn’t until October 1880 when the Pearl of Great Price was voted by the Church to become one of the standard works. BYU Religion Professor, Robert Mathews, stated, “Some years thereafter, Elder James E. Talmage, working under assignment from the First Presidency, made further contributions. These included putting in cross-references and footnotes and also arranging the material in its present chapter and verse form. The Talmage edition was published in 1902” (Ensign, January 1986).

4. You Can View the ORIGINAL Transcript of Joseph Smith’s Translation of the Book of Moses Online

Although the original transcript of Joseph Smith’s re-translation of the Bible (including what we consider to be the Book of Moses) is owned by the Community of Christ (formerly the RLDS Church), the images can be viewed at the official website for the Joseph Smith Papers. Containing the handwriting of Joseph’s scribes (Sidney Rigdon, Emma Smith, Oliver Cowdery and John Whitmer), the manuscript shows how the original text was simply a flow of sentences rather than the numbered verses we have today.

5. The Book of Moses Contains Several Doctrinal Insights Not Found Anywhere Else in Scripture

Some of the key points brought out in the Book of Moses that are either skimmed over or don’t appear in other scripture are: