Scripture Book of Mormon Top 7 Overlooked Heroes in the Scriptures

We all know the most commonly told scripture stories like Nephi breaking his bow, Noah building the ark, or Captain Moroni and the Title of Liberty. Because of these awesome stories, it is easy to overlook so many other amazing stories. Do you know the stories of any of these overlooked heroes in the scriptures?

He may be the least overlooked in our list of overlooked heroes. This one is more well known because his name is memorable. Most people know the name Teancum but what is his full story? He is mentioned a few times in Alma 50-52 and in Alma 61 and 62.

He had great tactical skills and he was assigned by Moroni to establish Nephite Armies to protect their land. It seems as though he went into every battle prepared to execute his plans in a very methodical way.

Teancum is most well known for his skill with the javelin, famously slaying multiple Lamanite leaders throughout these chapters. According to Moroni, Teancum possessed “the Spirit of God which is also the spirit of freedom” (Alma 61:15).

Teancum eventually died in battle. When Moroni heard of Teancum’s death he said, “for behold, he had been a man who has fought valiantly for his country, yea, a true friend of liberty.”

EVERY SINGLE PERSON was on the ground except for a woman named Abish. She was not converted at this time because she had “been converted to the Lord for many years” because of an experience her father had.

When she saw all of these people around her on the ground, she knew it was by the power of God. So, she immediately ran to all of the people that weren’t present for this event and told them about it.

I think that the story of Abish is amazing because it shows us that while we may not be Ammon, we can be Abish. We may not be the prophet, but we can be the hands that God needs to guide people to the prophet, and therefore to Christ. All she did was open her mouth, share her faith, and lift others up. 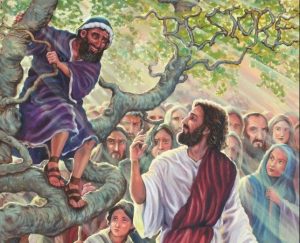 The story of Zacchaeus is short and sweet, which is why I think that it is often overlooked. This entire story is told in 8 verses in Luke 19:2-8, 10. He was a short, redheaded tax collector and all of those things combined didn’t make him very well-liked among his peers.

When he heard he Jesus was coming to town he was determined to see the Savior in person. As the scriptures say, he was “little of stature” so, in order to actually see Jesus, he climbed a sycamore tree to catch a glimpse. As Jesus passed by, He stopped and said, “Zacchaeus, make haste, and come down; for today I must abide at thy house.”

Can you imagine?! I mean, Jesus called him by name, told him to come down from the tree, and spent the day with him. This didn’t go over well with the other people in town and they said, “He [Jesus] was gone to be guest with a man who was a sinner.”

That is when Jesus said, “For the Son of man is come to seek and to save that which was lost.” Christ used this as a sort of parable. I think that this story is something that we can all relate to on some level.

At some point, we have all felt lost in the crowd or rejected by peers. Remember that no matter your circumstance here, Christ came for you and he is here for you. Let us be joyful and let Him into our hearts as Zacchaeus did. 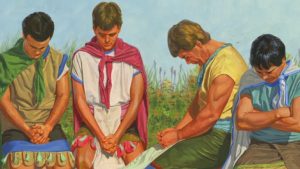 The Book of Mormon often refers to Ammon, Aaron, Omner, and Himni collectively as the Sons of Mosiah. The chapters relating to these brothers then follow the story of Ammon and Aaron. Because of this, we tend to forget that there are four faithful brothers, not just two.

All four of these brothers spent 14 years preaching the gospel to the Lamanites. Omner and Himni were preaching to the Lamanites in the lands of Ishmael, Middoni, Nephi, Shilom, Lemuel, Shemlon, and more. It is said that they brought THOUSANDS to the Lord.

The stories of their brothers Ammon and Aaron are so prominent that I think we often overlook these two amazing missionaries and the great work that they did. These two are definitely two of the most overlooked heroes in my opinion.

For this one, we are taking it back to the Old Testament. Joel was a prophet in the land of Judah. In the Bible, there are three chapters in the Book of Joel. In chapter one, Joel calls for a solemn assembly in the house of the Lord.

Today we generally have solemn assemblies when we are sustaining a new prophet. What is interesting is that in the April 2020 General Conference, President Nelson called for a special solemn assembly, much like Joel once did.

Many of the quotes that we refer back to today come from Joel because he is known for his prophecies about the Millennium. He was later quoted by the Angel Moroni appearing to Joseph Smith and the Apostle Peter.

These two verses in 1 Chronicles 4:9-10 tell a short story about a man named Jabez. This chapter is basically listing families and descendants of the line of Judah, so it’s one of those chapters that we tend to skim through because it’s full of a bunch of names that we don’t know.

For two verses, they take a second from listing names and talk about Jabez saying that he “was more honorable than his brethren.” He also asks the Lord to enlarge his coast” and “keep [him] from evil.” Verse 10 says that the Lord did exactly that.

Some scriptorians believe that the word “coast” in this context refers to what God has instructed you to do. It could also mean that he was asking literal territory. In either case, it is clear the Jabez was an honorable man and that the Lord trusted Him to do the right thing with his life.

It’s important for us to remember that the Lord trusts us. He will guide, direct, and bless us to become who He needs us to be. Jabez is a great example of that.

Related Link: How to Become the Hero of Your Own Story

One of the most famous women in the Bible is Esther. Her adoptive father Modecai is definitely one of the most overlooked heroes. Mordecai was a Benjamite who was carried away from Jerusalem and kept in captivity. Later in his life, when he saw that Esther’s parents had died, he took charge of her care and raised her as his own daughter.

After Esther presented herself before the king, Mordecai checked on her at the gates every single day. Many of the scriptures in Esther mentioning Mordecai say that he was waiting at the gate for her.

Later, when everyone was ordered to worship Haman, Mordecai stood for what he believed in and did not bow down to any false gods. Because of his continued faithfulness and trust in God and Esther, he eventually received honor in the king’s house and joy was restored to the Jews.

While our lives may not involve daughters being married to kings, they do involve us suffering trials. Mordecai is a wonderful example of a loving and supportive father. He was also a selfless man who held true to his faith even when it was legally forbidden.

Of these overlooked heroes, who is your favorite? Share in the comments.