Faith Belief Islam vs. Radical Islam: Of All People, Mormons Should Get It

Led by a controversial prophet. Seen by their neighbors as antagonistic to traditional Western ideals. Driven from one declared promised land to another, until finally accepting that the only hope for peace was to leave their country for a safer political climate. Deprived of their property by a government that declared them not to be an actual religion. Persecuted and arrested for their religious practices. Embarrassed by “fundamentalists” who profess to be part of their faith but represent them in no form or fashion.

Such is the history of the Mormons.

I’ve been more than a little dismayed in recent days by comments I have seen from members of the Church in response to the terrorist attacks in Paris. I get the outrage. I share it. I kind of wish that Mormons believed in a traditional concept of Hell so that we could dispatch ISIS there. But what concerns me is when we paint with a broader brush and start to condemn Islam as a whole. Mormons, of all people, should know better.

Mormons, like Muslims, have had more than their share of kooky cousins. We have at least one violent incident in our history, the Mountain Meadows Massacre, in which we clearly were the aggressors and which we have spent more than a century trying to explain away or forget. It was an aberration. It doesn’t reflect our values. But our critics bring it up relentlessly, and we are judged (rightly or wrongly) by what happened there.

We also have our “Fundamental LDS” apostates who skew outsiders’ views of both our morality and our fashion sense. (Note to the polygamists: “Homespun” is not the new black). I don’t know about other Mormons, but I’m worn out from explaining to people that no matter what the FLDS call themselves, they aren’t part of our religion and don’t represent us. But again, rightly or wrongly, they are part of the baggage that Mormonism carries with it, and they will influence society’s perception of us whether we like it or not.

Islam also has its baggage—writ large in the form of “fundamentalist Islamic terrorists.” Unfortunately, their kooky cousins make up a larger and louder percentage of the faith than what Mormons have to deal with, but the result is the same: public perceptions are skewed by the dramatic actions of the few and not the values of the majority.

It might be easier for Islam if it had a central authority that could throw out the crazies. It doesn’t. The divisions within Islam are numerous, as they are with Christians. Again, like Christians, there are some formal divisions within the faith, but then a widespread diversity of belief and practice among those declaring themselves members of the faith. Again, Mormons should understand this, given the lengths to which we have to go in order to convince some people we are Christian.

To suggest that there is a monolithic “Islam” that we can easily dismiss as a religion of intolerance and hate is theologically sophomoric and intellectually lazy. I’ve read a fair amount of the Quran (I can never remember where to put the apostrophe on that one), and despite my best efforts, I’ve never come across the “bomb the innocent” section. Mind you, there are plenty of folks both within and outside Islam that insist it is there. It’s a perspective thing, and not everyone’s perspective is the same.

Because of my work as an immigration lawyer, I’ve been blessed to represent people from a number of different backgrounds, including Muslims. I’ve also been fortunate to be able to develop lasting friendships with Muslims. I’ve seen their frustration with being associated with terrorists, and I have shared my frustration with peaceful Muslims not being louder in their denunciation of actions that they see as repugnant to Islam. Fortunately, I think that is changing. Muslim opposition to what happened in Paris has been, in my limited perspective, considerably more vocal than the response to 9-11. Part of that may be that social media is giving such voices a safer platform on which to be heard. Regardless, my personal experience tells me that such views are out there and that they are sincere.

Mormons of all people should be hesitant to judge all people of a faith based on the conduct of a segment of its professed adherents. I’ve learned over the years that when someone hears that I am a Mormon, they may understand that to mean “magic underwear clad, gay hating, misogynist polygamist.” None of that is right, but I at least understand how they got there. And while I try to unload all of that baggage, I’m not inclined to weigh down people of other faiths with burdens they didn’t ask for.

We should be willing to give the benefit of the doubt to the good people of Islam that we have so long asked for ourselves. 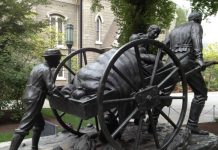